Understanding evolutionary processes in the context of Miocene tectonic and climate change in North America requires a long and fossiliferous stratigraphic record.  Records that span the interval of elevated tectonic activity and the Miocene Climatic Optimum (18-14 Ma) are rare in western North America.  The most complete sedimentary record within the Basin and Range Province that spans this important period of Miocene history can be found in the California Mojave Desert region.  A number of fossil bearing stratigraphic sequences capture the Late Hemingfordian (18-16.3 Ma) and Barstovian (16.3-13.6 Ma) North American Land Mammal Ages.  The Mojave Desert strata are rich in mammal fossils from the late Early and Middle Miocene and are temporally well constrained through biochronological, radiometric (ash tuff layers) and paleomagnetic dating methods.

The type section of the Barstovian, the Barstow Formation (16.7-13.4 Ma) provides a long record that extends into the latest Hemingfordian and overlaps in time with local faunas from the Hector Formation (18.5-16 Ma).  North of the Transverse Ranges, exposures of the Cajon Valley Beds and Crowder Formation were deposited from 18-14 Ma and 17.5-7.1 Ma, respectively, with fossil beds spanning the Hemingfordian to Barstovian transition.  These formations preserve a diversity of both small and large mammals (106 identified species) with an abundance and diversity of rodent fossils.  Each formation represents a separate basin of fluvial deposition with lacustrine sediments and poorly preserved paleosols in some units during the Miocene pulse of tectonic activity and the Miocene Climatic Optimum.  Lithological comparisons within and between basins indicate multiple sources of deposited sediment; however, deposition in all basins has been associated with regional tectonic uplift and erosion.

These formations serve as important archives for evaluating evolutionary, ecological, geologic, climate and environmental changes through time, and as four separate but coeval basins, across space.  Dr. Badgley and doctoral students, Tara Smiley and Katharine Loughney are actively working in the Mojave to reconstruct the local paleoenvironment over the climate and tectonic history of the region, and to assess responses to landscape change in fossil mammal diversity and paleoecology.  Fieldwork in and analysis of material from the Mojave Desert will contribute to our understanding of processes occurring within the larger context of the Basin and Range Province.

Amboseli National Park in Kenya, East Africa is an ideal testing ground for investigating both how seasonality of temperature and precipitation influence temporal and spatial heterogeneity of ecosystems and how species respond to seasonal resource availability.  The park is a semi-arid savannah ecosystem, with diverse habitats ranging from grasslands to dense woodlands to swamps.  The mammalian fauna of the park is species rich and highly responsive to the seasonality of precipitation that defines the regional environment.  Large herbivorous mammals fall into two dietary categories, browsers and grazers, and relative to their water uptake, water-independent and water-dependent species.

Our research in Amboseli National Park has focused on wildebeest and zebra are both water-dependent grazers, feeding mostly on grasses.  In 2010, in collaboration with Dr. Behrensmeyer from the Smithsonian Institute, Dr. Badgley collected teeth from over 80 individual zebra and wildebeest skeletons as part of a long-term study comparing bone assemblages to censused living populations.  Ongoing isotopic analyses by doctoral student Tara Smiley on a sub-set of teeth from each species have created seasonality profiles by gender and age in water utilization and diet.

Dr. Badgley and Tara Smiley returned to Amboseli in 2011 to collect water and grass samples from different sources in the park.  While in the field, scientists from the Kenyan Wildlife Survey were trained in sampling methods, and grass and water samples were continually collected twice monthly over a one-year period.  Isotopic analyses of these samples aim to generate data on the seasonal and spatial isotopic variation of resources available zebra and wildebeest in the park.  These data will be used to constrain input values for modeling tooth-isotope systems, and to better understand seasonal patterns of water utilization and diet recorded in stable isotopes.

The Siwaliks of Pakistan

Siwalik sediments and fossils are continental deposits derived from the southern margin of the Himalayas and associated mountain ranges bounding the contact between the Indian and Asian tectonic plates. Outcrops of the Siwalik Group extend from western Pakistan to Myanmar. The most detailed studies of sediments, faunas, geochronology, and environmental history have focused on sequences in Pakistan, ranging from Oligocene through Quaternary in age. My work has occurred in Siwalik deposits of the Potwar Plateau, a low plateau of Quaternary silts covered with villages and farms southwest of Islamabad. The edges of the plateau are eroded into badland exposures of the Neogene Siwalik sequence. 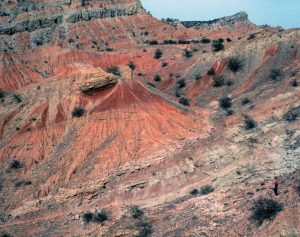 The Siwalik record of the Potwar Plateau occurs in fluvial deposits that accumulated in a foreland basin over much of the Neogene. Boundary faults between the Indian and Asian plates now underlie the Potwar Plateau, which has been uplifted and deformed into a shallow syncline with thousands of meters of sediments exposed along modern river valleys. The Neogene deposits represent the channels and floodplains of major and minor tributaries of the ancient Indo-Gangetic fluvial system and are continuous between 18.0 and 5.0 Ma. Over 300 species in 50 families of mammals have been documented from this sequence, recording both notable endemic groups and notable absences. The large-mammal record is dominated by ungulates, proboscideans, and carnivorous mammals, and the small-mammal record is dominated by cricetids, murids, and rhizomyine spalacids.