We have described the pathway for the enzymatic catalysis of disulfide bond formation. We have shown that the oxidative power for protein folding originates with quinone reduction and revealed that disulfide bonds originate from oxygen in vivo.

Generally, evolution is thought to proceed by making slight alterations. In this paper we observed evolution making a big step. E. coli was put under a strong genetic selection, and the bacteria came up with a completely new answer to the problem of how to form disulfide bonds. We forced bacteria to use thioredoxin, normally a reductant, to make disulfide bonds instead. The thioredoxin variants we isolated had acquired an iron sulfur cluster and a new mechanism of catalyzing disulfide formation. Surprisingly the mutations were extremely simple, a single amino acid substitution generating an additional cysteine residue near thioredoxin’s active site. This shows that enzymes can acquire cofactors and transform their mechanism of action, via simple point mutations that could easily occur in nature. This dramatically illustrates the plasticity and potentially rapid nature of evolutionary change. 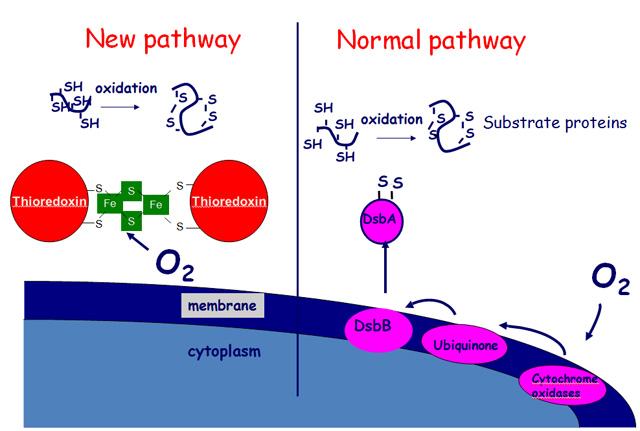