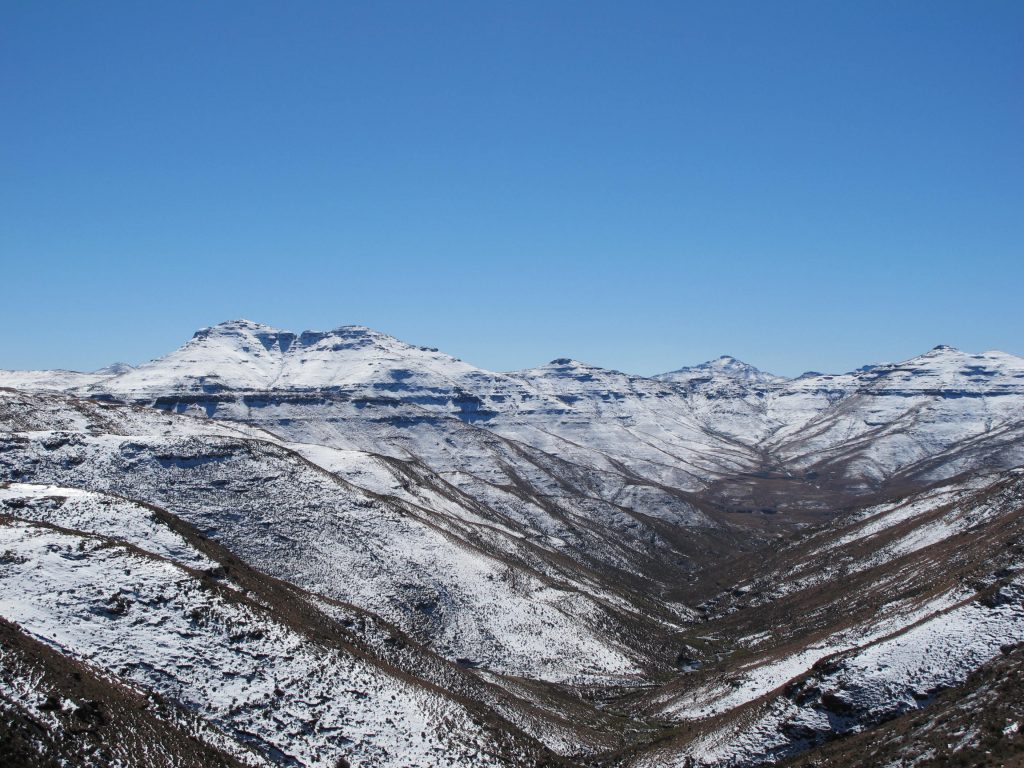 Project AMEMSA aims to understand the deep-time selective contexts and biocultural responses that led to the evolution within Africa of our species’ extraordinary adaptive elasticity. Co-directed by Drs. Brian Stewart (U-M) and Genevieve Dewar (Univ. of Toronto), the project’s rationale springs from a simple yet profound fact: ours is the only species to have colonized the entire globe. The ecological tolerance of modern humans – underwritten by a capacity for complex, rapidly transmittable culture – is unique. Recent archaeological research suggests that this tolerance stems from selective pressures faced and surmounted by African foragers during the climatically turbulent period after 500,000 years ago.

Most attempts to reconstruct modern human behavioral evolution focus on the first appearance of artifacts thought to signal complex cognition, such as ornaments and artwork. This can be problematic since such artifacts are context specific and only rarely preserve from deep-time. Taking a more holistic approach that is biogeographical and comparative, we investigate human adaptations to African environments that are relatively ‘marginal’, or those characterized by low ecological productivity and/or predictability. Marginal environments are important analytical settings because they pose resource stresses and logistical challenges that demand flexible, creative solutions. Studying the timing, pace and modes of their colonization can help us understand the evolutionary development of resilient behavioral systems that are the hallmark of modern foragers, including expansive social networks. Marrying late Pleistocene archaeological and paleoenvironmental datasets, AMEMSA aims to understand how early modern human societies organized themselves spatially, socially and technologically to exploit two challenging habitats: (1) the afromontane highlands of Lesotho and (2) South Africa’s Namaqualand desert. AMEMSA is or has been generously funded by the British Academy, Natural Environment Research Council (UK), the National Science Foundation, the Wenner-Gren Foundation(USA), Social Sciences and Humanities Research Council (Canada). Find our more from our project website. 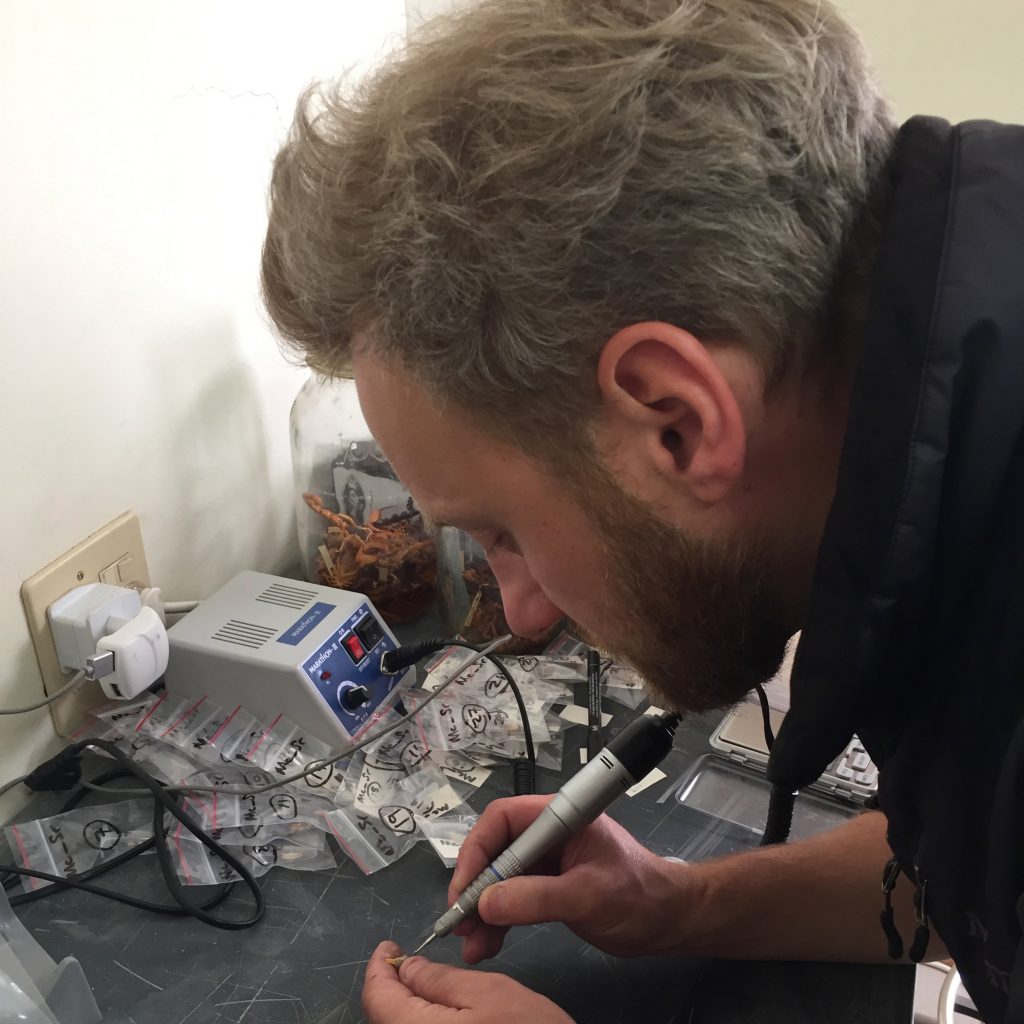 Today’s social media platforms are the outermost branches of an evolutionary tree whose roots run deep. At some point in the Pleistocene, hunter-gatherers began exchanging non-utilitarian artifacts like beads and other ornaments over hundreds, and sometimes thousands of kilometers. Among ethnographically documented foragers these networks symbolically link distant groups, acting as social adhesives that enhance fallback opportunities, information availability, and reproductive potential, among other benefits. Charting the evolution of long-distance social networks can thus help determine when, why and how our species began harnessing material culture to mitigate risk, particularly when strategizing life in extreme environments.

To explore these issues, Dr. Brian Stewart and grad student Yuchao Zhao, in collaboration with Drs. Joel Blum, James Gleason (U-M Earth and Enviro. Sciences) and Peter Mitchell (Univ. of Oxford), are conducting strontium isotope (Sr87/Sr86) analyses of ostrich eggshell beads recovered from Melikane and Sehonghong, two rock-shelters in the Maloti-Dralensberg Mountains of Lesotho (southern Africa). These sites have archaeological records of human occupation stretching back to approximately 80,000 and 60,000 years ago, respectively. We hypothesize that these beads were manufactured in South Africa’s arid interior Karoo Desert to the west from which they were introduced to the highlands via long-distance exchange networks. Our data are demonstrating the deep-time existence and persistence of macro-scale exchange networks, with implications for tracing the development of social strategies for long-term survival in the southern African interior. Seed funding for this project was generously awarded by the U-M MCubed funding scheme. 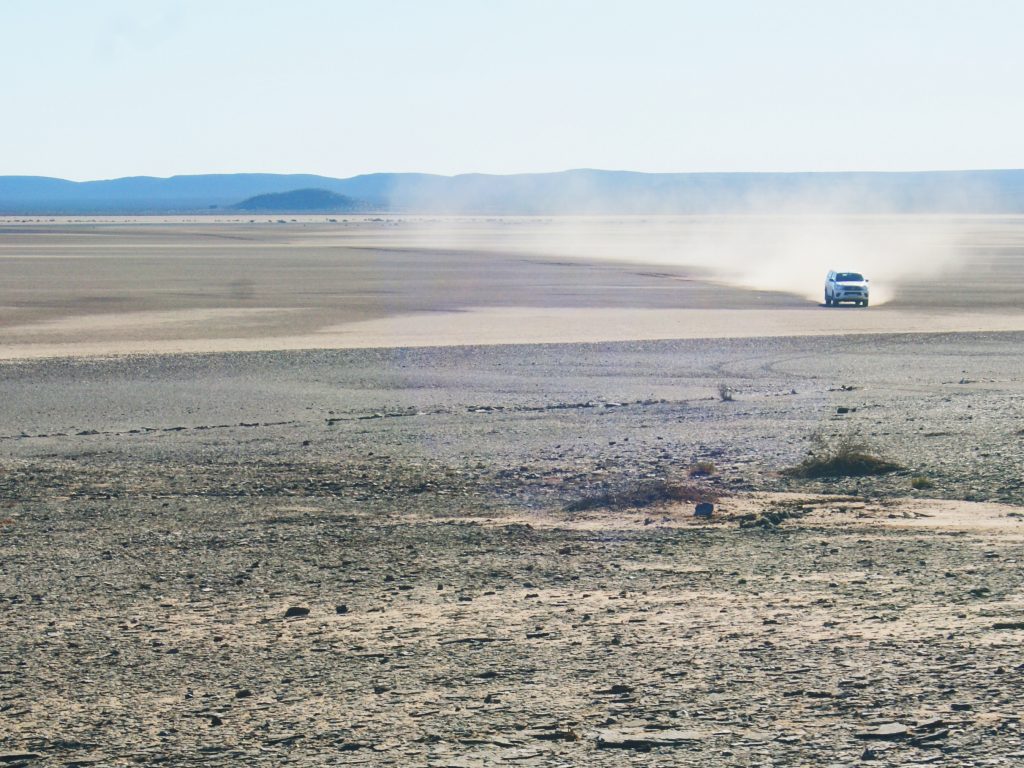 Evidence for extensive coastal occupation in South Africa was long assumed to imply an arid, inhospitable continental interior. Yet the environmental history of much of the interior remains poorly known. In the Nama Karoo, multiple large, now-dry paleo-lakes in association with abundant Stone Age archaeology remain almost entirely uninvestigated. Karoo paleo-lake shorelines have been identified and multiple, discrete lake phases inferred, but the antiquities of most lacustrine deposits and their associated archaeological occurrences are unknown. Many lacustrine landforms also lie in close association with stabilized sand dunes, which can overlie pan surfaces and are inter-bedded with fluvial gravels, providing even greater potential for developing multi-faceted landscape/climatic histories in this region. We are conducting the first systematic regional mapping, chronometric dating, and multi-proxy palaeoenvironmental analyses of paleo-shorelines in the Nama Karoo, in conjunction with new surface archaeological surveys, to reconstruct the timing and magnitude of lake inundations and their articulation with human settlement dynamics of the South African interior. The project’s first phase is generously funded by the National Geographic Society. 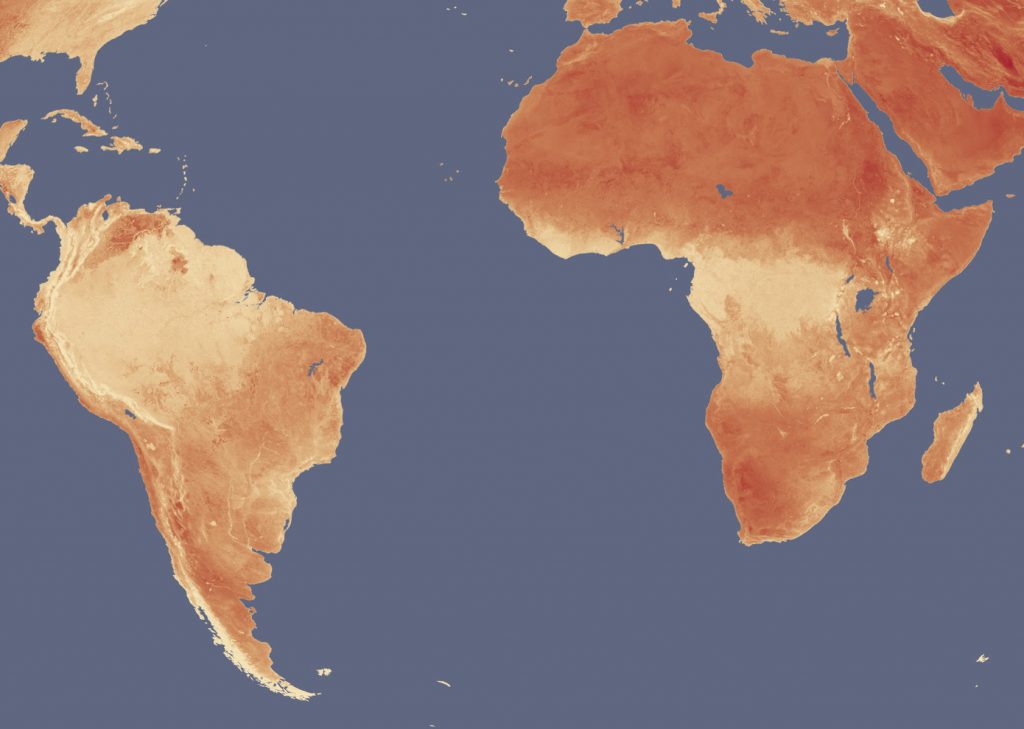 This project aims to compare human adaptations to arid Patagonia and southwest Africa. Located at opposite temporal ends of humanity’s dispersal across the globe, the dryland ecosystems of these subcontinents are nonetheless similarly structured. They thus provide fertile contexts for exploring processes of demographic and adaptive convergence. Generously funded by the Leverhulme Trust, SPAN brings together around 20 researchers (including Dr. Brian Stewart) specializing in the archaeology and paleoenvironments of these regions.

The participants are focussing on the following key themes: the evolution of quaternary climates, ancient (re)colonizations, coastal adaptations, the development of pastoralist lifeways, and the impact of European colonization and settlement. These themes are being investigated on a comparative bases at three international workshops. The first occurred in Namaqualand, South Africa in 2016 and the second in Santiago, Chile in 2017. The final takes place in Oxford, UK, in 2019, when participants will workshop co-authored manuscripts for eventual publication. The project is expected to culminate in a special issue of Journal of Arid Environments. Beyond publication, in building collaboration between southern hemisphere researchers, SPAN also emphasizes the global significance of the archaeology they investigate, something frequently lost in a discipline still dominated by institutions, publications, and pasts north of the Equator. 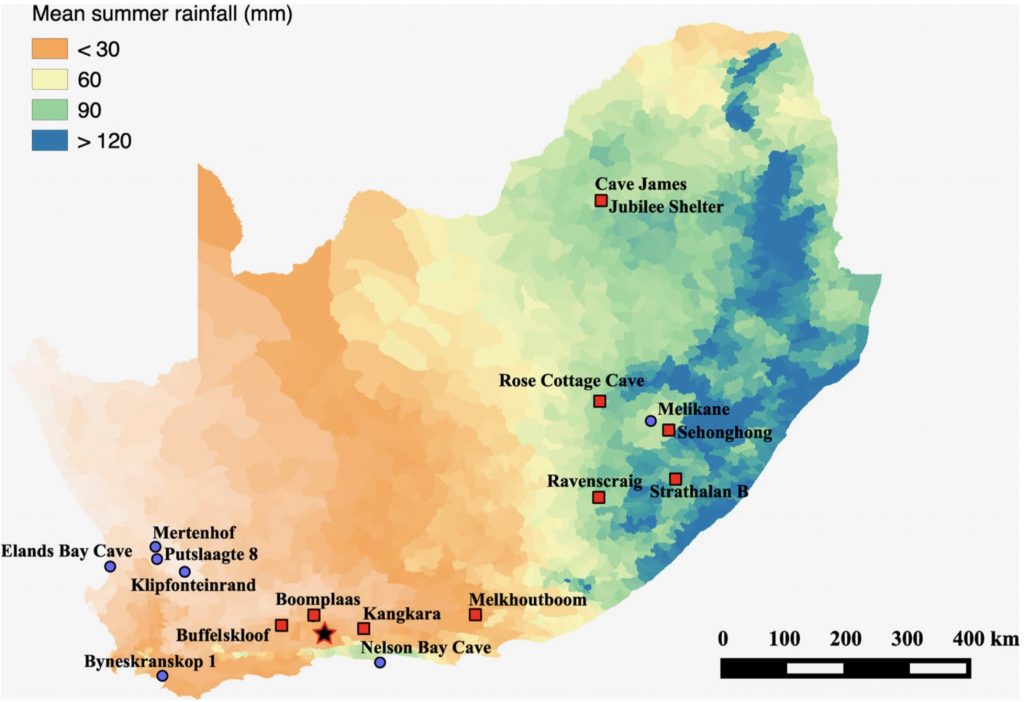 This project aims to systematically to re-evaluate the chronology of the Middle to Later Stone Age transition in southernmost Africa using AMS radiocarbon dating with state-of-the-art sample pretreatment techniques and Bayesian modeling. The advent of the Later Stone Age (LSA) is one of the least understood developments in sub-Saharan African prehistory. In the second half of the later Pleistocene, the diverse Middle Stone Age (MSA) lithic industries that had proliferated across Africa from ~300 ka fade in the wake of LSA technologies emphasizing miniaturized stone tools, plus ornaments and organic implements resembling those made by recent African foragers. However, with similar material indicators of complex cognition now evident in older late Pleistocene contexts, the MSA-LSA transition has become firmly decoupled from the ‘modernity’ debate. Rather than a single event or revolution, it appears to have been a process of tremendous spatiotemporal variability that unfolded across some 20-40,000 years. In eastern Africa, for example, the LSA is now argued to appear suddenly ~60 ka (Mumba Cave, Tanzania), gradually by ~50 ka (Enkapune ya Muto, Kenya), and convolutedly between ~50-30 ka in Ethiopia. The picture in southern Africa is similarly mixed. Recent re-investigations of key transitional strata at Border Cave, South Africa, suggest that the LSA began there ~44 ka, ≥15,000 years earlier than any other site on the subcontinent. How can we explain the nature and tempo of these changes? Were they purely technological, perhaps signaling increased efficiency and amplified use of composite toolkits in a context of increasingly mobile populations? Do they correlate with this period’s volatile climatic flux and resulting changes to the subsistence environment? Or do they reflect different social arrangements, perhaps influenced by human demographic changes across landscapes?

Throughout Africa, arguably the greatest hindrance to grasping the variables underpinning the MSA-LSA transition and the paleodemography of human populations at this time is poor chronological resolution. But unlike many other parts of the continent, southern Africa – with numerous high quality sequences containing transitional deposits within the reach of radiocarbon dating – has excellent potential for remedying this. At present, however, it is not up to the task. The chronologies of nearly all the key sequences are problematic for various reasons, from scant numbers of dates to the use of outdated protocols. This project’s objective is thus systematically to re-evaluate the chronology of the MSA-LSA transition in southernmost Africa in order to understand the timing, tempo, and significance of these major cultural changes. Our ultimate goal is to allow southern African data to contribute more fully to global understandings of technological change (especially the miniaturization of stone tools) and paleodemography by establishing a sound chronological basis for comparisons elsewhere in the southern hemisphere (Sahul) and beyond (Eurasia). At the same time, because archaeological sequences in southern Africa typically house rich archives of paleoenvironmental proxy data redating key sequences of archaeological interest will simultaneously yield more accurate records of paleoenvironmental change. The project is a collaboration between Drs. Brian Stewart (U-M), Justin Pargeter (Emory Univ. ), Emma Loftus (Univ. of Cambridge, Peter Mitchell (Univ. of Oxford), and Alex Mackay (Univ. of Wollongong). To date, we have comprehensively re-dated the MSA-LSA transitional chronologies of two major southern African sites: Boomplaas and Rose Cottage Cave (see publications page). Generous funding for this project has been provided by Natural Environment Research Council (UK) and PAST (South Africa). 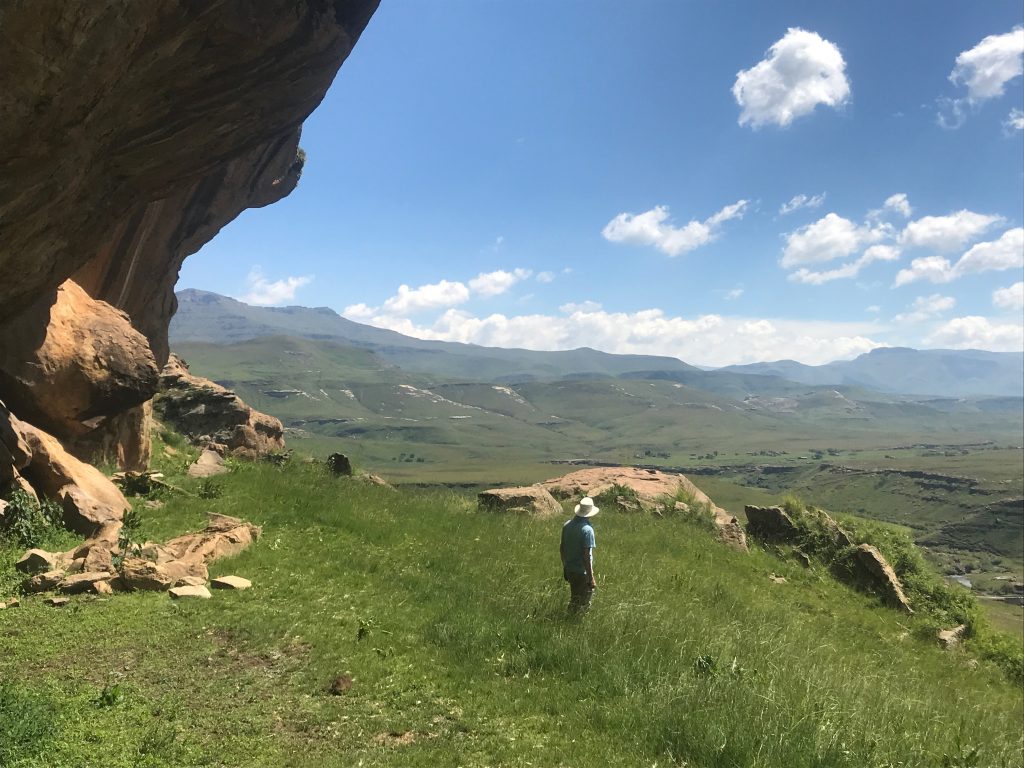 This project aims to create a financially sustainable community-based ecomuseum dedicated to the development, promotion and management of highland Lesotho’s tangible and intangible heritage. It is a collaboration between Drs. Brian Stewart (U-M), Sam Challis(Univ. of the Witwatersrand, South Africa) and Mr. Rehtabile Mokhachane (PGS Heritage). The ecomuseum will connect a network of communities living among heritage and natural sites of special significance in Lesotho’s southeastern highlands, including one of country’s two national parks. The ecomuseum would have the highly desirable benefit of putting local communities at the forefront of the preservation and protection their own cultural traditions, the environment they inhabit, and the region’s fragile archaeology, particularly its extraordinarily rich rock art record which is rapidly disappearing due to active vandalism. This project – the first of its kind in Lesotho – builds on nearly a decade of fieldwork in the nation on the part of the PIs during which they, alongside several close colleagues, have trained Lesotho’s first cadre of professional archaeologists and rock art specialists. Seed funding was generous provided by the U-M African Studies Center African Heritage and Humanities Initiative. This grant will be instrumental in kickstarting the venture by helping us design a formal plan during this coming year with which to attract much larger funding.