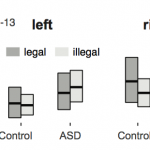 This work is part of a project with co-authors Renee Lajiness O’Neill and Ioulia Kovelman that was jump-started by U-M’s MCubed initiative. The broader goal is to develop a new perspective on how brain systems that underlie different stages of language comprehension, from sounds on up to sentence meanings, are impacted in ASD.

Neuroscientific evidence points toward atypical auditory processing in individuals with autism spectrum disorders (ASD), and yet, the consequences of this for receptive language remain unclear. Using magnetoencephalography and a passive listening task, we test for cascading effects on speech sound processing. Children with ASD and age-matched control participants (8–12 years old) listened to nonce linguistic stimuli that either did or did not conform to the phonological rules that govern consonant sequences in English (e.g. legal ‘vimp’ vs. illegal ‘vimk’). Beamformer source analysis was used to isolate evoked responses (0.1–30 Hz) to these stimuli in the left and the right auditory cortex. Right auditory responses from participants with ASD, but not control participants, showed an attenuated response to illegal sequences relative to legal sequences that emerged around 330 ms after the onset of the critical phoneme. These results suggest that phonological processing is impacted in ASD, perhaps because of cascading effects from disrupted initial acoustic processing.

And here is a closer look at our main result: Evoked brain responses to phontactically legal and illegal pseudo-words. Signals were recorded by MEG and localized to left and right auditory cortex. Average activity from 750-850 ms after word onset is shown separately for participants with ASD and for controls. Key result: greater right hemisphere response to legal sequences in ASD, but not for controls.