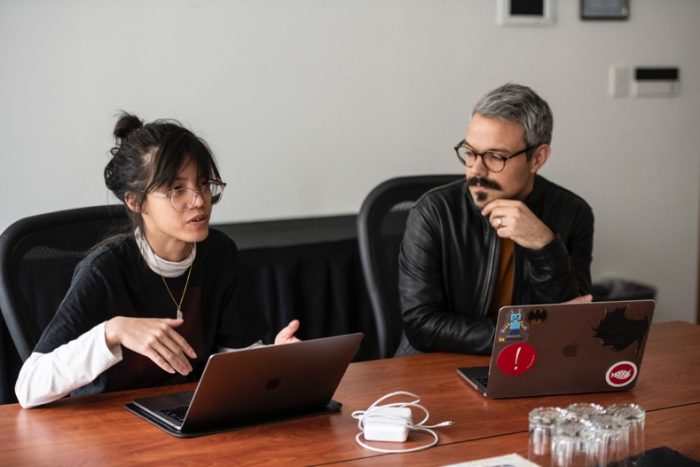 For six days at the end of May, members of the Precarity Lab—one of the current projects at the Humanities Collaboratory—retreated to the Banff Centre for Arts and Creativity in Alberta, Canada to participate in a Book Sprint, “an immersive adventure in group-collaboration and shared authorship.” The team invited five external and internal faculty members, PhD students, and independent scholars to co-write a book on digital precarity, a topic that explores “the relationship between digital technologies and emergent forms of precarity and power.”

Team members returned from the retreat with accounts of an exceptionally productive experience and a manuscript for a book entitled Technoprecarious. Precarity Lab Principal Investigator Lisa Nakamura reports that the team is finalizing their book proposal and will soon be submitting a manuscript for review to the Media Futures book series published by Goldsmiths Press/MIT Press.According to participant Iván Chaar López (Mellon Diversity Postdoctoral Associate, Cornell University), the approach taken for the sprint was a novel one for most involved. Although Precarity Lab team members have worked together collectively for a number of years, the Book Sprint works differently. “We did not have months of meetings, of slowly digesting ideas and elaborating arguments,” he explains. “Our retreat was designed on the premise and with the promise of writing a book in a week.”

One key component of the accelerated process was the presence of Book Sprint coach Faith Bosworth. Chaar López was impressed with Bosworth’s skills as a facilitator. “Faith was fundamental in making everything work,” he said. Nakamura agreed. “[Faith] utterly transformed the team’s dynamics by making us entirely task-focused,” she said. “We retained and increased our sense of community while working under different sets of deadlines each day we met.”

Designed in 2008 by founder Adam Hyde, the Book Sprint method allows for “rapid book production” and enables authors to quickly experiment with different formats and methodologies. This flexibility was especially instrumental as the expertise of the Precarity Lab team is vast, with scholars on the project representing fields such as American culture, information science, media theory, African American studies, Latina/o studies, critical race and ethnic studies, feminist technoscience, and queer theory.

The Book Sprint model was more than productive, it was personally meaningful. “This was the most fulfilling intellectual experience that I have ever had” says Nakamura. What’s more, in contrast to the independent work on her own monographs, she explained that the Sprint was playful and social. “We wrote a great book, laughed a lot, and the energy remained high throughout.” In part, that’s due to the community building inherent in the Book Sprint model. “Eating every meal together at the conference center and having it in a beautiful but remote location helped us think together,” she said. “We went on a few hikes in the Rockies, saw a puppet opera, and took a gondola to a mountaintop on our last evening together.”

For Cindy Lin, as for other participants, the extent of collaborative writing implemented by the Book Sprint model was entirely new. “As a critical computing scholar, I am familiar with the norms of co-authoring,” explained Lin. “Yet, I have never written a monograph (and not an anthology) with 10 other scholars.” Lin says that the collaboration led to greater communication: “We had to understand and be generous with each other’s writing styles, voices, and scholarly and political commitments.”

Nakamura valued the equalizing influence of the Book Sprint, saying that “Graduate students and junior faculty made as many important decisions and contributed as much as full professors.” Chaar López found the reciprocity rewarding. “I learned so much about how others develop ideas, produce concepts, think about digital technology and capital, how they collaborate and how they have grown as thinkers” he said.

Not only was the Book Sprint model conducive to the collaborative energies of the Precarity Lab team, but the picturesque location of the retreat fostered creative momentum. Founded in 1933, the Banff Centre for Arts and Creativity is “a learning organisation built upon an extraordinary legacy of excellence in artistic and creative development.” Located in the Canadian Rocky Mountains, the Banff Centre “aims to inspire everyone who attends its campus – artists, leaders, and thinkers – to unleash their creative potential.”

Chaar López says the retreat’s location led to a more focused and productive experience. “The intense process of writing in a remote location gave us an opportunity to pay attention to each other, to listen to each other,” he explained. “Writing for five days straight, for about 8 to 10 hours per day, was incredibly hard…and this challenging experience brought us closer together. It was something we now shared as a collective. It is something that now marks our lives.”