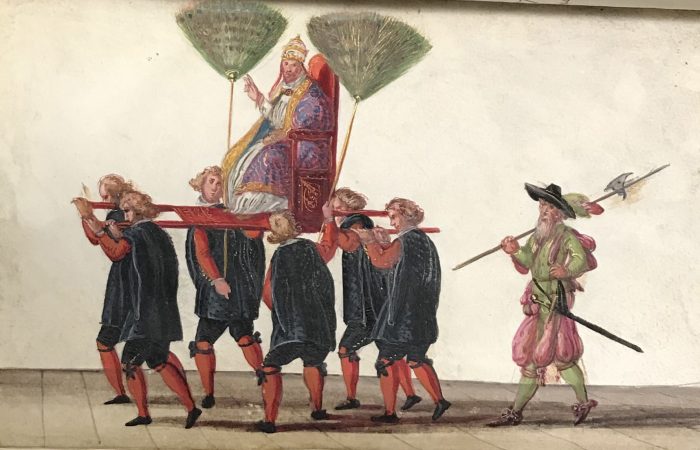 The Collaboratory is pleased to announce that a 5×5 Incubator Grant has been awarded to Illuminating a Manuscript in the Age of Print, a team which has formed to study an impressive new manuscript acquired by U-M Library.

The manuscript, produced circa 1630, contains 44 miniatures of exceptional caliber by an unknown artist.

Members of the team bring a diversity of perspectives and represent a range of disciplines. Megan Holmes (History of Art) is an expert in medieval religious art; Brendan McMahon (History of Art) is an early modernist with an interest in material objects, their global circulation, and coloration; George Hoffmann (RLL) specializes in the literature of the French Renaissance; Pablo Alvarez (Special Collections) is a librarian and historian of media; and Helmut Puff (German/History) is a historian of the Reformation.

According to the team, the manuscript renders the Catholic hierarchy, starting with the pope, followed by church dignitaries, representatives of orders, and clerics. “Surprisingly,”  this unfinished work “culminates in several portraits of religious reformers: Hus, Luther, Melanchthon, Zwingli, and Calvin.” The team will discuss “how best to unlock the stories this enigma of an object incites us to explore.”

The team looks forward to considering a range of topics in their study of the manuscript including religious toleration and tolerance, manuscript production in the age of print, and the likely context of the book’s making, the city of Lyon in France.

Additionally, the team’s goals include discussions of how to make this manuscript — previously held in private ownership — known to scholars across the world, the campus community, and the public  through classes, exhibitions, webinars, and research projects.

Pictured: An image from the manuscript showing Pope Urban VIII (1623-1644) in a procession