The early modern Bangla tales of the legendary or mythic pīrs are romantic narratives that speak to the often strange and puzzling encounters between Hindus and Muslims, especially Vaiṣṇavs and Sufis. Figures such as Baḍakhān Gāji and Satya Pīr navigate a world of foreigners and locals, courtiers and country bumpkins, in encounters ripe with a myriad of false assumptions regarding the place of religion and religious identity. Orientalists dismissed these tales as syncretistic rubbish; religious reformers claimed they were heretical; literary historians banished them to the genre of folk or women’s tales; and even linguists characterized their language as something other than Bengali. I wish to argue that these Muslim texts are undertaking a very serious cultural work that is not possible within the available restricted genres of Islamic history, theology, and law. These texts explore the subjunctive, not in the sense of the way the world should be, but how it might be imagined, how it might come to be. The work of these texts is to explore how an Islamic cosmology might accommodate itself to and then appropriate the predominately Hindu cosmology encountered in the Bangla-speaking world of the early-modern period. Each narrative operates according to a logic of ‘what if . . .’ and the narrative used for illustration will be the eighteenth century Mānik pīrer juhurā nāmā of Jaiddhi. Perhaps surprisingly, I argue that parody is the critical mechanism by which Islam in these tales provides a critique of local religion and culture that makes Islam in Bengal distinctive. Tony K. Stewart is Gertrude Conaway Vanderbilt Chair in Humanities at Vanderbilt University and a specialist in the religions and literatures of early modern Bengal. His works include The Final Word: The Caitanya Caritamrta and the Grammar of Religious Tradition and Fabulous Females and Peerless Pirs: Tales of Mad Adventure in Old Bengal.

This event is sponsored by Digital Islamic Studies Curriculum through the support of The Andrew W. Mellon Foundation.

Although it might seem as if the only interpretation of Q.4:34 is in reference to marital discipline, a holistic hermeneutical approach that starts by reconnecting Q.4:34 to its logical context reveals another meaning altogether. In this talk, Professor Abla Hasan introduces a new interpretation of Q.4:34 and provides twenty arguments for questioning the credibility of the traditional exegetical understanding of what is commonly known at the most controversial verse in the Qur`an. Dr. Abla Hasan is an Associate Professor of Practice of Arabic Language and Culture at the University of Nebraska-Lincoln. Dr. Hasan teaches Arabic language and culture and serves as the Arabic Program undergraduate advisor and coordinator. Her teaching and research focuses on Qur`anic Studies, Islamic feminism, women and gender studies, and Arabic studies.

This event is sponsored by Penn State University Department of History and the Digital Islamic Studies Curriculum through the support of The Andrew W. Mellon Foundation.

Unfortunately, and due to unforeseen circumstances, this Distinguished Lecture will be offered in a virtual format only. Please tune in to the live video feed at:
https://player.cloud.wowza.com/hosted/mpmwp8vk/player.html

The Trump movement has not only brought Islamophobia out into the open, it has brought it into the White House and other centers of American power. In a talk that will draw from his recent book Out Of Many Faiths: Religious Diversity and the American Promise, Eboo Patel will highlight the various ways that American culture and American Muslims are responding to this bigotry. While recognizing the clear challenges of our times, Eboo will draw on Islamic theology, American history and contemporary movements to illuminate a hopeful path forward. Eboo Patel is the Founder and President of Interfaith Youth Core (IFYC), a non-profit organization that is working to make interfaith cooperation a social norm in America. He is the author of four books and dozens of articles, has spoken on more than 150 campuses, and served on President Obama’s Inaugural Faith Council.

A key figure on issues of religious diversity and democracy, Eboo was named one of America’s Best Leaders by U.S. News & World Report in 2009. He is the author of Acts of Faith: The Story of an American Muslim, the Struggle for the Soul of a Generation; Sacred Ground: Pluralism, Prejudice, and the Promise of America; Interfaith Leadership: A Primer; and Out of Many Faiths: Religious Diversity and the American Promise. He also publishes a regular blog for Inside Higher Ed, called ‘Conversations on Diversity’.

Eboo holds a doctorate in the sociology of religion from Oxford University, where he studied on a Rhodes scholarship. He has been awarded the Louisville Grawemeyer Prize in Religion, the Guru Nanak Interfaith Prize, the El Hibri Peace Education Prize, the Council of Independent Colleges Academic Leadership Award, along with honorary degrees from 15 colleges.

Eboo lives in Chicago with his wife, Shehnaz, and two young sons. He is a die-hard fan of Notre Dame Football, Wilco, and really good coffee. Dr. Jaimie Bleck is an Associate Professor of Political Science at the University of Notre Dame. She specializes in African politics with a focus on democratization, education, participation, and citizenship. Her first book, Education and Empowered Citizenship in Mali, was published by Johns Hopkins University Press in 2015. She and Nicolas van de Walle published, Continuity in Change: Electoral Politics in Africa 1990-2015, with Cambridge University Press in 2018. Her work appears in the Journal of Politics, the Journal of Modern African Studies, Comparative Political Studies, African Affairs and Democratization. She spent 2014-2015 on sabbatical in Mali as an American Council of Learned Societies (ACLS) Fellow. Her research has been funded by grants from the Spencer Foundation, National Science Foundation, and USAID-DRG.

Professor Bleck is also a concurrent faculty member in the Keough School of Global Affairs, Senior Research Advisor with the The Ford Program in Human Development Studies and Solidarity, Faculty Fellow with the Kellogg Institute for International Studies, and Faculty Affiliate with Notre Dame Program for Interdisciplinary Educational Research (ND PIER).

This event is sponsored by the Digital Islamic Studies Curriculum through the support of The Andrew W. Mellon Foundation. It is co-sponsored by the University of Michigan African Studies Center and the Weiser Center for Emerging Democracies. 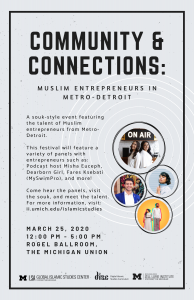 A souk-style event featuring the talent of Muslim entrepreneurs from metro-Detroit. Stop by for panels on marketing strategy, creativity, and community, as well as a chance to chat with local entrepreneurs and purchase their work!

The festival will feature a variety of panels with entrepreneurs such as Misha Euceph, Dearborn Girl, Fares Ksebati, and more. A full list of entrepreneurs can be found below.

Come hear the panels, visit the souk, and meet the talent Metro-Detroit has to offer.

This event is free & open to the public, but please RSVP so we can make sure the space accommodates everyone. RSVP here: https://forms.gle/zYXDbGtHD7DiG5vW6 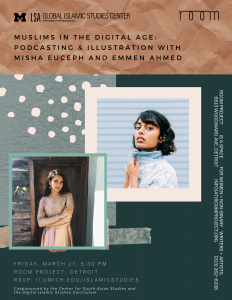 Misha Euceph’s podcast “Tell Them, I Am” explored the lives of Muslims in the public eye. The LA Times called it “quietly revolutionary,” by the LA Times, the New York Times said it was “hypnotic listening,” and it is one of TIME’s 10 best podcasts of 2019. Emmen Ahmed created portrait pieces for each episode of “Tell Them, I Am.” Her artwork plays with traditional Mughal miniature paintings, Islamic art, the female form, and Bollywood imagery to hold a mirror up to the South Asian-Muslim-female experience in the West.

Join us on Thursday, March 26th at 4:00 PM in the UMMA Multi-purpose room to discuss how Muslims are defined and how they define themselves in the digital age.

This event is free and open to the public, but please RSVP so we can assure our space can accommodate everyone: https://forms.gle/g3LMtFVaFerXcdf16 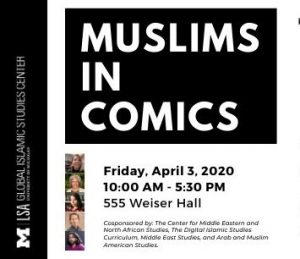 Panelists will include: Esra Mirze Santesso, Chris Gavaler, Aliyah Khan, & Karla Mallette. A keynote address will be given at 4:00 PM by Saladin Ahmed.

This event is free and open to the public but please RSVP: https://forms.gle/MKZ96YSR7JgiYvHn8

From dissidents to villains to superheroes, how are Muslim characters written–and how does the public read them–in comic books today? This workshop explores the roles open to Muslim characters in serialized comics and graphic novels. The medium of serialized comics, commercialized in the twentieth century by mainstream comics publishers such as Marvel and DC, and epitomized by their respective superhero universes, has long been associated with a lack of racial and religious diversity, the sexualization of female characters, and a reader base that is stereotypically young, male, and white. Minority characters were often limited to tokenized villains or sidekicks designed for comic relief. But the contemporary young Muslim female superhero Ms. Marvel symbolizes a comics landscape that is changing. In the contexts of the Gulf Wars, 9/11, the Arab Spring, the Palestinian conflict, ongoing civil unrest in the Middle East, and worldwide refugee migrant crises, writers and artists from the Muslim and Arab worlds, and others writing journalistically and historically about those locales, are at the forefront of graphic medium literary production.

Graphic novels and comics by and about Muslims and Arabs comprise a growing and distinctive narrative strain within comics studies—one that this workshop of comics and Muslim and Arab Studies artists and scholars seeks to investigate.

Chris Gavaler ( On the Origin of Superheroes: From the Big Bang to Action Comics No. 1, 2015) explores the Islamicist history of the 20th-century superhero.

Karla Mallette ( European Modernity and the Arab Mediterranean, 2010) reports on resistance to Muslim and other minority identity politics from some comics readers.

The presenters bring postcolonial, decolonial, comics studies, and historicizing methodologies to bear on understanding commonalities and differences among Islamic, Muslim, and Arab graphic narratives, reading them as transnational works that, as many of their subjects do, cross borders and resist authoritarian states.