I moved from Europe to the United States in 1983 to study at Colorado College. The following summer, I was the first Black African woman to work at Lac du Bois, the French program at Concordia Language Villages. There, I spoke about being a postcolonial subject and my positionality in a French space. I also started highlighting my identity as a black woman and my right to set my own political agenda, specifically, to emphasize my African history. Young Americans were so interested in talking about these subjects with me. It was a beautiful experience.

The next summer, I encouraged my brother Gilbert Ekotto join me at Lac du Bois. The year after that, we invited Pascal Gasirabo from Burundi to come to the Village program. We agreed that we would speak French like an African language and privilege our African cultures. We also introduced lessons on the history of colonialism, highlighted some francophone African countries, and taught about our own regions. What had been Lac du Bois, a Village program focused mostly on France, also became an African Village where French was spoken.

In A Rap on Race (1971), anthropologist Margaret Mead and writer and civil rights activist James Baldwin attempt to understand how the tangled forces of whiteness and blackness have shaped American society. Mead is particularly interested in examining white fear. She suggests the problem of discrimination and hierarchical treatment is a result of excessive fear that warranted excessive protection. She relates this to common associations of blackness and darkness, offering examples such as “growing up afraid of the dark,” or the idea that “bad things happen in the dark.” This fear is then transformed into a means to rationalize the exploitation and violence visited upon Black Americans.

While Baldwin also considers the origins of this fear, he is more interested in explaining how it directly affects Black Americans. He argues that the lack of trust within the two communities is a direct result of white fear, and he counters the idea that Black individuals should be responsible for healing or mending it. Until white Americans directly address this fear and work to heal its associations with Black Americans, he suggests, the country will not heal.

Now, almost 50 years since Meade and Baldwin “rapped on race,” COVID-19 has changed the world, and George Floyd’s death has reminded many that America can no longer function with the racial status quo. We must transform our institutions both philosophically and structurally. We need to address the continued existence of white fear. To do this, we must attend to ongoing economic disparity. We must consider the discourses produced by social media platforms. We must change what we teach ourselves and our children. We must open history to all humanity.

I know that a colonized subject’s struggle is always there. It is caused by an ongoing nervous condition that comes from vulnerability. In France and Switzerland, where I was largely raised, I always had to be on the defensive. When I read Maya Angelou’s I Know Why the Caged Bird Sings, I realized that I harbored a fear that someone would say something mean to me. My fear came from their fear of me.

One of my favorite events each summer at Lac du Bois was International Day, when all the Villages come together to celebrate difference. Each Village introduces a cultural activity to others, and villagers have an opportunity to eat food from different countries. During the festival, villagers, counselors and staff make friends from around the world. We promise to keep in touch and come back the following summer.

What always struck me about International Day was the possibility of an open world, in the woods of Minnesota, where we come together from all corners of the globe. I saw what humanity might look like without the fear of others, and it had a material effect on me. For that day, surrounded by friends from around the world, I could live and celebrate the complexity of my identity as a French-speaking African woman without fear.

I know International Day to be an exception. But I hope that in America and across the globe, we will face our next conversations about racial equality and colonial status without fear.

In 2010, Dr. Frieda Ekotto was awarded the “Global Citizenship Award” from Concordia Language Villages for 20 years of service preparing young people for responsible citizenship in our global community. For Lac du Bois, she developed and taught the college-credit course, “Race, Racism, Ethnicity and Gender in the French Speaking Space.”  She is Lorna Goodison CollegiateProfessor of Afroamerican and African Studies, Francophone Studies and Comparative Literature at the University of Michigan.

Dr. Ekotto is acknowledged as Lorna Goodison Professor of Afroamerican and African Studies, Comparative Literature and Francophone Studies.
Frieda Ekotto has been awarded a Collegiate Professorship named for Professor Emerita Dr. Lorna Goodison. This award comes on the recommendation of the College of LSA.  Collegiate Professorships are one of the highest faculty honors given by the college and university. This Professorship is based upon a lifelong career of ground-breaking scholarship, teaching, and mentoring in African and African Diaspora literature and culture.

In December 2018, Frieda accepted an award for Vibrancy of Silence at the Festival international du film transsaharien (FIFT) under the category “Immigration in African Cinema.” About the award, the festival director Ahmed Chahid said, ” The choice of Frieda Ekotto intervenes by recognizing an African woman who is situated at an American university as a researcher, novelist, and philosopher, who delivers a positive image of the feminine energies and potentialities in the continent of Africa. Her film brings to bear these intellectual and cultural openings on the African stage.” 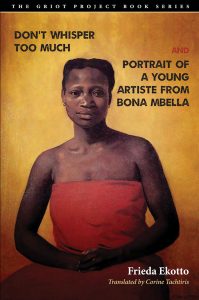 Don’t Whisper Too Much and Portrait of a Young Artiste from Bona Mbella (2018) is now published in English by the Griot Book Project Series in partnership with Bucknell University Press. Translated by Corine Tachtiris, the book is available for purchase on Amazon. Originally published as separate pieces under the French titles Chuchote pas trop in (2005) and Portraite d’une jeune artiste de Bona Mbella (2010) this work of fiction celebrates untold love stories between African woman in a positive light. Now that it circulates in English, these stories are available to readers across the globe.

The University of Michigan’s Center for the Education of Women, Department of Afroamerican and African Studies, and African Studies Center are pleased to present the 2018-2019 African Women Film Series. These exciting films celebrate women’s voices through rich, dynamic, and intimate visual portrayals. Please join for the following screenings:

November 25, 2018 at 7pm: Vibrancy of Silence by Marthe Djilo Kamga and Frieda Ekotto

April 3, 2019 at 6pm: Notre Étrangère (The Place in Between) by Sarah Bourain 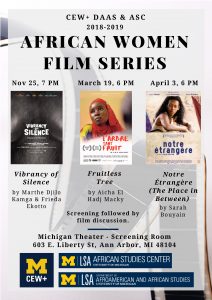 On May 19, 2018, Frieda was recognized at her alma mater Colorado College with an honorary degree in Doctor of Letters. In the video below, she is being introduced by Devaka Premawardhana, Professor of Religion. When he states that Frieda is “the first female African student in our institution’s history” students in the audience can be heard cheering. Premawardhana goes on to note that Frieda “exemplifies through her own border crossings the themes of freedom and confinement at the heart of her work.” He concludes by acknowledging her deep pursuit of her scholarly achievements.  She has risen to become one of the most preeminent critics of Francophone literature in the world. As he bestows upon her the honorary degree, the schools acknowledges her many academic advances since her time as a student at Colorado College.

Click here for more photos of the commencement ceremony 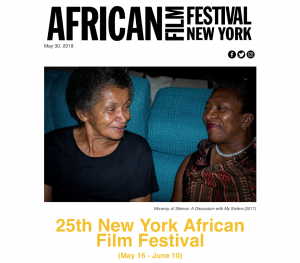 Vibrancy of Silence: A Discussion With My Sisters (2017) by Marthe Djilo Kamga and Frieda Ekotto screened at the 25th New York African Film Festival which ran from May 16 to June 10, 2018.

Frieda spoke at a Q&A on Saturday June, 9th 2018 at the Maysles Cinema in New York. She answered questions about her work which, according to the Film Festival’s newsletter, takes us along a journey in which “she highlights the creative achievements of Sub-Saharan African women in various intellectual and artistic fields – Frieda Ekotto, Koyo Kouoh, Zolan N’Gono and Marie Sabal-Lecco. Over the course of the film, she engages in fruitful conversations with these artists who, like her, know exile as well as how necessary it is to transmit to younger generations what they have learned as their multiple identities have evolved and fused.” 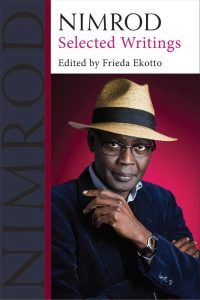 The University of Michigan Press has published the first English translations of key essays, stories, and poems by Nimrod, a major figure in contemporary African letters. The publication is edited by Frieda Ekotto.

The Chadian writer Nimrod—philosopher, poet, novelist, and essayist—is one of the most dynamic and vital voices in contemporary African literature and thought. Yet little of Nimrod’s writing has been translated into English until now. Introductory material by Frieda Ekotto provides context for Nimrod’s work and demonstrates the urgency of making it available beyond Francophone Africa to a broader global audience.

At the heart of this volume are Nimrod’s essays on Léopold Sédar Senghor, a key figure in the literary and aesthetic Négritude movement of the 1930s and president of Senegal from 1945 through 1980. Widely dismissed in recent decades as problematically essentialist, Senghorian Negritude articulated notions of “blackness” as a way of transcending deep divisions across a Black Diaspora under French colonial rule. Nimrod offers a nuanced reading of Senghor, drawing out the full complexities of Senghor’s philosophy and reevaluating how race and colonialism function in a French-speaking space.

Also included in this volume are Nimrod’s essays on literature from the 2008 collection, The New French Matter (La nouvelle chose française). Representing his prose fiction is his 2010 work, Rivers’ Gold (L’or des rivières). Also featured are some of Nimrod’s best-loved poems, in both English translation and the original French.

The works selected and translated for this volume showcase Nimrod’s versatility, his intellectual liveliness, and his exploration of questions of aesthetics in African literature, philosophy, and linguistics. Nimrod: Selected Writings marks a significant contribution toward engaging a broader audience with one of the vital voices of our time. This book will be essential reading for Anglophone students and scholars of African philosophy, literature, poetry, and critical theory, and will offer a welcome introduction to Nimrod for general readers of contemporary international writing. 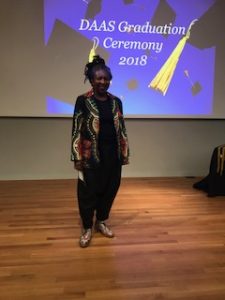 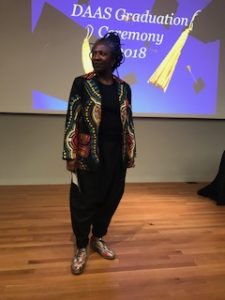 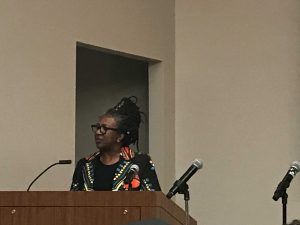 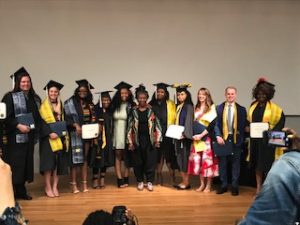 On April 28, 2018, Frieda Ekotto spoke the graduation ceremony for DAAS undergraduate graduating seniors. This is Frieda’s fourth and final graduation speech as Chair of the department. Congratulations to all the graduates!

On Monday May 21, 2018, Frieda will be celebrated by her alma mater Colorado College as she accepts an honorary degree. The Colorado College Board of Trustees voted unanimously to confer Frieda with this honor, which will be presented to her at the college’s Commencement ceremony at Armstrong Hall on the Colorado College campus. This award acknowledges Frieda’s impactful teaching, internationally recognized scholarship, and significant leadership as chair of the Department of Afroamerican and African Studies at the University of Michigan. In accepting this honor, Frieda serves as an inspiration to students at Colorado College who may follow in her footsteps.

For inquiries, concerns, or questions regarding this website, please email Nina Jackson Levin at ninalev@umich.edu