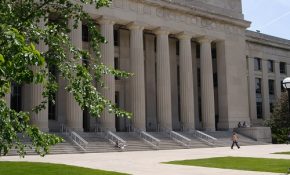 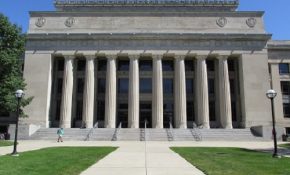 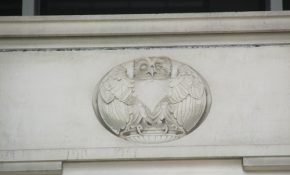 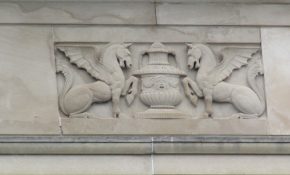 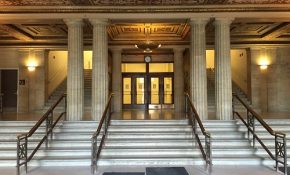 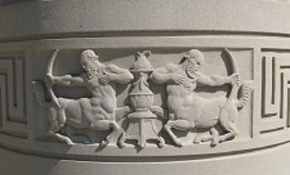 A blend of Greek and Roman architectural motifs, the facade of Angell Hall (1924) is perhaps the most iconic image of the University of Michigan campus today. The eight majestic Doric columns and classical entablature recall that of a Greek temple (in particular, the Parthenon in Athens), while the inscription and medallions on the attic are much closer to that of a Roman imperial arch (for example, the Arch of Constantine in Rome). Much of the facade is decorated with images of Greek mythology, including images of Pegasus, centaurs, and owls, as well as four bas reliefs, sculpted by Ulysses Ricci, with personifications of Poetry, Art, History, and Science in Greek dress (as seen in the header for this website). Built by Albert Kahn, Angell Hall elegantly marries the awe-inspiring grandness of the neoclassical tradition of the facade with the so-called factory aesthetics of much of the building’s interior for which Kahn was famous. (One exception is the first floor lobby which some say may have been inspired by the small-scale Doric structures uncovered during excavations at Priene.)