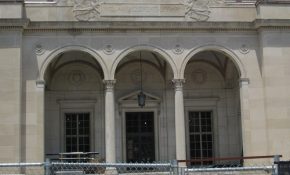 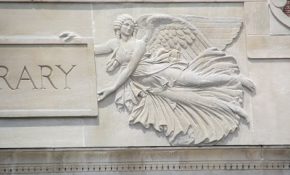 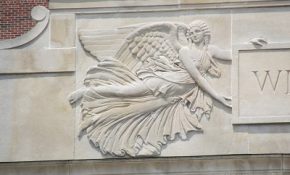 It is interesting to note that the building that Albert Kahn was most proud of on the U-M campus was not Angell Hall or Hill Auditorium or any other of his major architectural works; rather, the structure in which Kahn took the greatest pride was his relatively much smaller Clements Library built in 1923. While the two arches of the facade held up by three Corinthian columns are a staple of Renaissance architecture modeled on the Greco-Roman tradition, the three doors within the portico recall a typical Roman temple. Like the use of classical columns, the angels on the entablature holding up the inscription is a revival of winged victories that graced many an ancient building. Professor Ulrich B. Phillips wrote the two inscriptions on either side of the facade, which read “In darkness dwells the people which knows its annals not” and “Tradition fades but the written word remains forever fresh.” Kahn’s elegant neoclassical design suggests perhaps that tradition too can be forever fresh, especially when one endeavors not merely to copy past tradition but to make it a part of the present so that it never grows old – a task that Kahn as a key figure in the development of modern architecture strove to accomplish in many of his buildings.