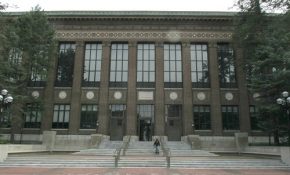 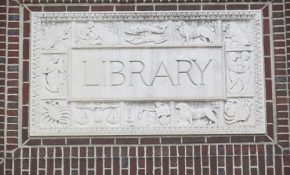 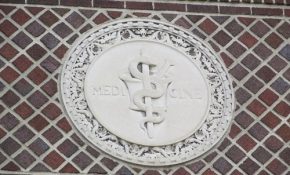 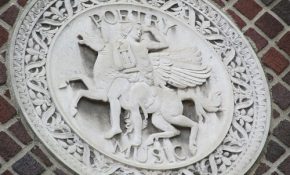 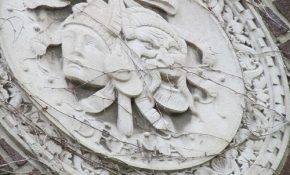 “No money was available for architectural effects.” That is what the Michigan Alumnus claimed in November of 1918 in an article on “The New Library Building,” now known as Harlan Hatcher Graduate Library. Although the building’s architect, Albert Kahn, knew how to construct grand facades with much architectural flare (as he was to do with those of Angell Hall and Clements Library a few years later), he was also able to convey a sense of dignity and importance with a much more minimalistic approach (and budget) through a blend of more subdued architectural motifs. Indeed, an intriguing blend of Gothic-inspired glass curtains interspersed with pilasters of flattened Corinthian-like capitals, Hatcher is certainly not completely bare of architectural adornment. Moreover, Greek zodiac characters surround the word “library” above the central portal, and several of the ten medallions representing the different branches of knowledge contained within the building use classically inspired symbols, including the staff of Aesclepius (the Greek god of healing), a Pegasus for poetry and music, and a Greek mask for drama. Although perhaps one of Kahn’s less extravagant buildings on campus, it is a no less refined architectural composition.

Previous: Greek Life | Next: Hatcher Reference Room Murals -- The Arts of Peace and The Arts of War