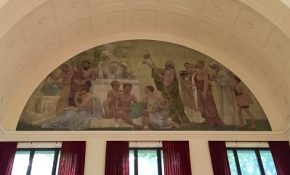 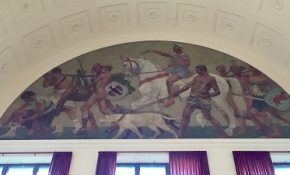 The Reference Room in Hatcher is one of the most stunning interior spaces that the University of Michigan has to offer, with its stained glass windows, its barrel-vaulted, coffered ceiling, and the two impressive murals that mark both its ends. These murals were painted for the Chicago World’s Fair in 1893 by Detroit-born artist Gari Melchers and bear the names The Arts of Peace (west end) and The Arts of War (east end). They were acquired by President James B. Angell in 1895 and (after several moves) were installed in the Hatcher Reference Room upon its completion in 1920; in fact, the barrel vault of the ceiling of the room was designed specifically to accommodate the murals. As is fitting for the classically themed decoration of much of the library, both oil-on-canvas paintings feature characters in classical garb, especially the The Arts of Peace, which depicts several figures in togas all of whom are “worshipers at the shrine of knowledge” (according to World’s Fair program).