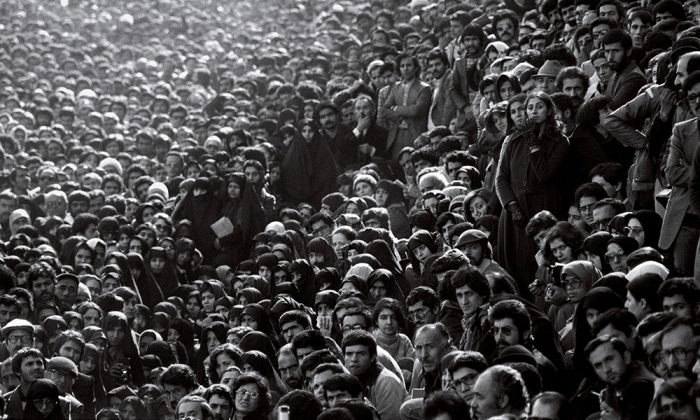 A 2019 symposium reflecting on Iranian Studies 40 years after the Revolution of 1979. Photo by David Burnett.

Revolutions are extraordinary events; they proclaim a decisive historical moment that simultaneously projects a new future and demands a reinterpretation of the past. The Iranian Revolution of 1979 was such a moment: it transformed Iran into a theocracy, put an end to American colonial rule and made political Islam a force to reckon with on a global scale. Many years have passed and much has changed since that fateful year; indeed, it now stands at the mid-point between the coronation of the final king of Iran and the present day. The Iranian Revolution and its Academic Aftereffects is thus an opportunity and invitation to collectively reflect on the writing of Iranian history, culture and society as we mark the fortieth anniversary of the revolution. How has the rupture disturbed the study of Iranian history, literature, and anthropology? What alternative perspectives have emerged as different sources, methods and theoretical approaches have been deployed to understand modern Iran? A growing cohort of scholars has begun to open new vistas in the study of modern Iran by moving away from statist perspectives as the focal point of inquiry, reframing the field through the perspectives of ethnographic history, gender studies, the history of sexuality, and media studies.

Our symposium brings a select group of this cohort of scholars together with the explicit aim to consider and interpret the aftereffects of the revolution in light of these questions above. To foster a dialog across disciplines we have chosen to organize the symposium around a series of three disciplinary workshops to highlight the mutual reinforcement of ethnographic history, literature, and media studies that has shaped contemporary scholarship on Iran. Faculty from the departments of History, Anthropology and Middle East Studies at UM will be invited to participate either as moderators or as commentators for each workshop. In conjunction with these three workshops, we will hold an Iranian Film Festival and an exhibition on new wave Iranian contemporary art, exploring the theme of this symposium in the visual arts.

The Iranian Revolution and its Disciplinary Aftereffects
1014 Tisch Hall

Friday February 15th: The History of Writing the Revolution

Saturday February 16th: A New Generation: Literature after the Revolution

In line with the goals of the Symposium, the films screened in this year’s festival were selected to provide viewers with a snapshot of Iranian cinematic history in the 40 years since the Revolution and introduce critical questions that have occupied both filmmakers and scholars of Iran over this time span. Many of the films in this program speak to each other on multiple levels, and our hope is that viewers who come to all six screenings will see certain thematic cores emerge. Click here for the full program.

Pedram Partovi (American University) is a historian of the medieval and modern Muslim world. His current research focuses on the history of youth movements and their role in creating and disrupting the political order in Iran and the wider Middle East.

Since the 1979 Islamic revolution in Iran, Iranian artistic production has had limited exposure in the International art scene. Though film has been a successful media that has transgressed the politics of sanctions and the climate of US isolationism, Iranian visual arts remain obscure and misrepresented in the American public domain. During the last four decades the visual and plastic arts have undergone fascinating turns in content and style as young artists have searched to find their own expressions; they have explored new aesthetic forms with which to give meaning to the local and the global. Their work is a reflection on the dilemmas of everyday life in the context of the socio-political transformations Iran has undergone through a revolution, a decade long war with Iraq and global sanctions.

Cultural exchange remains to be a productive way to stimulate a conversation between alienated nations and create a platform for engaging one another. This exhibit is an attempt to initiate one such venue of dialogue between Iran and the US. Moreover, it is an opportunity to introduce a different vision of Iranian women with its focus on 16 Iranian female artists born/ raised after the revolution, who have turned inward to represent intimate female spaces and experiences. This group of emerging female artists mainly live and work in Iran and have developed their distinct artistic languages as participants in their country’s turbulent political circumstances.

Like many other Middle-Eastern countries, Iranian women have been stigmatized both from within and without the region. Although Iran’s patriarchal system limits women’s presence in the public sphere, women constitute more than 60 percent of the college gender ratio. As a result, they continue to undermine patriarchy and the gender gap in the workforce. Moreover, despite traditional and religious beliefs that prevent women from expressing their selves, women are fully cognizant of their rights and resist on a daily basis to be recognized regardless of their gender.

In turn, the perception of Iranian women outside of Iran continues to eroticize them as other. Iranian women are typically portrayed as submissive and passive victims to match an Orientalizing stereotype of Muslim women. Subsequently, most of the work represented in the US focuses on the hijab and on gender segregation in Iran. These images in circulation are politically charged and are fed by the popular media.

This exhibition is dedicated to a new generation of women artists, who have found their creative voices despite such facile representations.

Inner Fragments will focus on universal conditions that women experience in their lives, beyond being mothers, wives, and daughters. This exhibition curates works by 16 women, showcasing their inspirations, intimate moments, frustrations, confusions, vulnerabilities, and alienation they encounter while being mothers, wives and daughters. This exhibition brings to public view a slice of Iranian women’s lives that is reflective, as it invites the viewer to experience female intimate worlds through their own stories.

Goal: The contemporary Iranian art scene is young, dynamic, and multifaceted. Inner Fragmentswill be a great opportunity to introduce Iranian contemporary art and young female artists to the Ann Arbor community and the larger Detroit population to initiate a reflection on the concerns of Iranian women as contemporaries, as citizens of a global world beyond. The goal is to shed light on the private thoughts of women, to draw a more intimate portrait of a younger generation of women artists in Iran. With this project, we hope to create a constructive and supportive space for Iranian women artists outside of Iran to showcase their work in the Western art scene. This exhibition, we hope, will present a new episode in the international art scene to incite mutual understanding and educate a Western audience about the complexity of trepidations for a new generation of women artists from Iran. This exhibition is an effort to create a space for dialogue and constructive discussion between the artists and the audience in the spirit of the humanities, regardless of political and geographical boundaries.

Mahsa Soroudi is an artist and independent art curator who is interested in interdisciplinary topics that can evolve into thought-provoking and meaningful exhibitions as well as affecting case studies that exist beyond the space of the exhibition. She is also passionate about taking steps towards familiarizing the American community with contemporary artists who had been disregarded or unseen due to the absences of exposures.

In recent years, she has been concerned about how contemporary Iranian art is being showcased in other countries and to what extent these expositions have presented Iranian contemporary art unaffected by popular stereotypes. With this particular project, she feels responsible to create a more organic representation of a group of Iranian female artists and their distinctive art practices, which has developed through their everyday efforts, challenges and complications.

Parisa Ghaderi is a visual artist, curator, and filmmaker. She earned her BA in Visual Communications from the department of Art & Architecture (Tehran University, Iran) in 2006, and her MFA in Art and Design from the University of Michigan (USA) in 2014. Her work responds to her experience of living in Iran and the U.S. which has revealed an in-between state about distance; In her work, she deals with emotional and physical distance, compounded loss, and the opacity of language.

Soroudi and Ghaderi graduated from the same college in Iran in 2006. After moving to the U.S. in 2009, and witnessing how Iranian art and specifically women artists are represented in the media and the art scene, they both felt the urge to alter this image, by showing a perspective of what transpires in Iran, and to focus on a younger generation of artists who share the same dilemma and themes in their work.