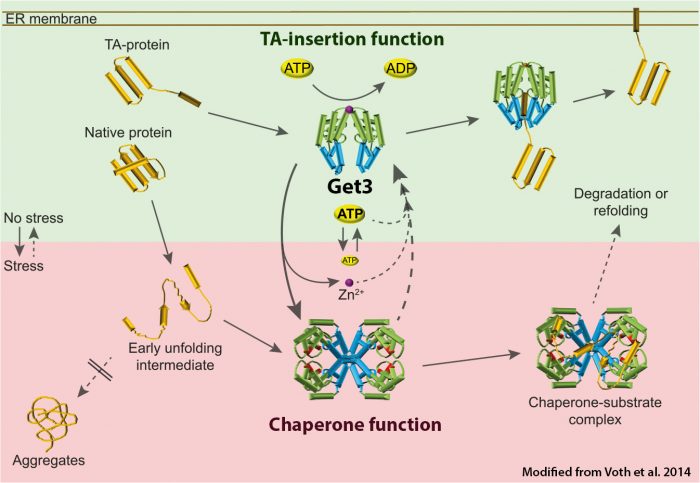 Life in an aerobic environment constantly results in the formation of reactive oxygen species (ROS) including superoxide anion, hydrogen peroxide and hydroxyl radicals. Although ROS are mainly associated with cell damage caused by irreversible oxidation of proteins, lipids, and nucleic acids, low concentrations of ROS play a crucial role in the response and adaptation to local and overall stress conditions. Redox-regulated proteins are the first responder to changes in the intracellular redox milieu and induce initial steps to protect against oxidants, repair cellular damage, and restore the redox homeostasis (Groitl and Jakob, 2014). Those proteins contain highly specific cysteine residues which are sensitive to reversible oxidative modifications, causing a conformational and functional switch of the protein (Reichmann et al. 2018).

We focus in particular on redox-regulated chaperones preventing aggregation of damaged proteins and facilitating refolding after stress condition has been overcome by the cell (Voth and Jakon, 2017). Our lab has discovered the E. coli heat shock protein Hsp33 as one of the first molecular chaperones that are specifically activated upon oxidation (Jakob et al. 1999). Under reducing conditions, a zinc-coordinating four-cysteine cluster maintains Hsp33 in its chaperone inactive form, but reversible oxidation of the cysteines results in zinc release and partial unfolding, which enables Hsp33 to bind unfolded proteins (Groitl et al. 2016). Hsp33 is the central player of a redox-regulated chaperone network that efficiently protects cells against the otherwise lethal consequences of oxidative stress. Recently, we identified the cytosolic ATPase Get3 as counterpart of Hsp33 in yeast. Get3 is a dual function protein which – under reducing conditions – targets tail-anchored membrane proteins to the endoplasmic reticulum, but turns into an efficient ATP-independent chaperone upon oxidation (Voth et al. 2014).

To further understand the underlying mechanism and the physiological context of Get3’s functional switching, we currently address three major points:
(1) The in vivo thiol-redox state of Get3 and stress conditions causing the structural and functional switch of Get3
(2) The precise molecular mechanism and kinetics of Get3 chaperone activation/inactivation
(3) The role of Get3 interaction partner, such as the GET receptors Get1 and Get2, in (in)activating Get3 chaperone function

In addition, we investigate whether TRC40, the highly conserved homologue of Get3 in mammals, undergoes functional switching as well. Studying the thiol redox state of TRC40 in mammalian cells exposed to various stress conditions should reveal whether TRC40 will also response by reversible thiol oxidation. Structural and functional analysis of the recombinant protein will show whether TRC40 has – in addition to its function as ATPase in the GET pathway – indeed a redox-regulated chaperone activity.