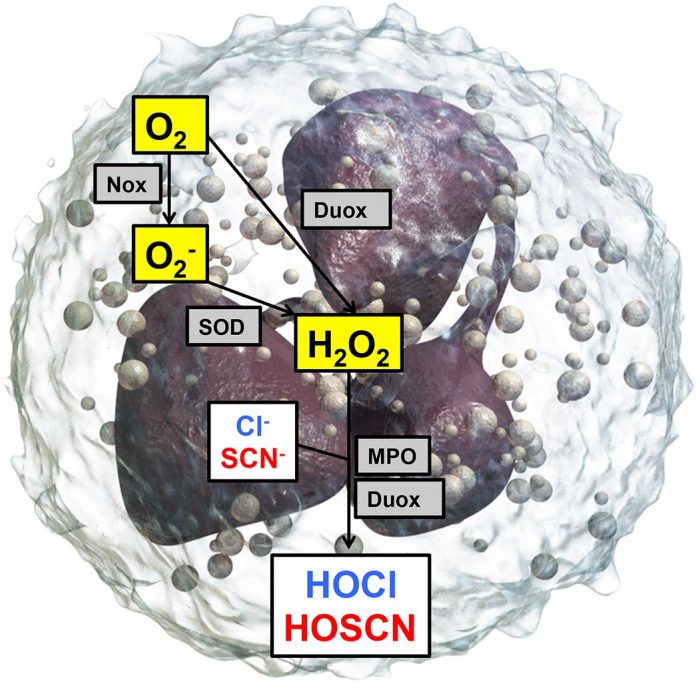 One powerful host-encoded strategy to kill invading pathogens is used by cells of the host innate immune response and involves the production of high levels of oxidants, including hypochlorous acid (HOCl) and hypothiocyanous acid (HOSCN) (Figure 1). HOCl, the major component of household bleach, has been described to rapidly react with many biological molecules, including proteins, lipids, and nucleic acids, making HOCl highly cytotoxic and bactericidal. In addition to its antimicrobial effects, however, uncontrolled production of HOCl has been described to cause extensive oxidative damage of cellular targets in the host tissue and causes a wide range of inflammatory diseases, leading to a progressive decline in the innate host defense and irreversible tissue damage. HOSCN, in contrast, differs significantly in its chemical properties and reaction rates from that of HOCl, primarily oxidizing low molecular mass and protein thiol residues. Moreover, it is considerably better tolerated by mammalian cells, and in fact is thought to serve as efficient scavenger of HOCl, eventually suppressing the severe cytotoxic effects caused by HOCl. Notably, the imbalance in the production of HOCl/HOSCN is believed to contribute significantly to the course of cystic fibrosis. Despite their important antimicrobial functions both in drinking water, as cleaning agents, and as defense mechanisms within our bodies, surprisingly little is known about the physiological consequences of HOCl/HOSCN-mediated oxidative stress in bacteria, the major targets that are affected, and the strategies that bacteria employ to reduce cellular damage. Our research aims to understand the molecular mechanisms behind bacterial responses to HOCl/HOSCN, which has the great potential to open up new treatment possibilities by targeting the crucial players in these processes.

Our lab directly compared the antimicrobial efficacy of HOCl and HOSCN on the pathogenic Pseudomonas aeruginosa strain PA1420. In the same study, we discovered that despite their distinct reactivities, both oxidants cause extensive protein unfolding and aggregation (Figure 1), and identified common and oxidant-specific response and defense systems by RNAseq analysis. We found that bacteria produce high levels of the universally conserved chemical chaperone polyphosphate (polyP)21 in response to both HOCl and HOSCN, which confers considerable resistance against the two oxidants by preventing the formation of toxic protein aggregates20 (Figure 2).

In a parallel line of research, we also developed a high throughput screen for detection of the activity of E. coli polyphosphate kinase (PPK), the bacteria-specific enzyme responsible for production of polyP, and screened three small molecule libraries available through the University of Michigan Center of Chemical Genomics (CCG) comprising approximately 3,400 chemical compounds22. We identified mesalamine, an FDA-approved drug that serves as gold standard in treating the inflammatory bowel disease ulcerative colitis, which is characterized by an inflamed colonial mucosa, to efficiently reduce the activity of PPK in vitro and substantially depletes polyP levels in a wide variety of Gram-negative pathogens as well as members of the human gut microbiota22. Equivalent to strains lacking the ability to produce polyP, we found that treatment of various pathogenic species with mesalamine significantly reduced their ability to form antibiotic-resistant biofilms, increased their sensitivity towards potent inflammatory oxidants (i.g. bleach, HOSCN), and resulted in impaired colonization of the pathogen in the host (Figure 2). In summary, our data suggest that inhibition of bacterial polyP production has the potential to increase the efficacy of the host to kill colonizing bacteria22. We are currently testing the efficacy of mesalamine as topical antimicrobial treatment for infections by drug-resistant P. aeruginosa using a rat burn wound model, since PPK-deficient P. aeruginosa strains have been shown to be much less virulent and more sensitive towards certain antibiotics. Additionally, we are interested to decipher polyP’s role in the formation of antibiotic-resistant persister cells and as protective agent during DNA damage.