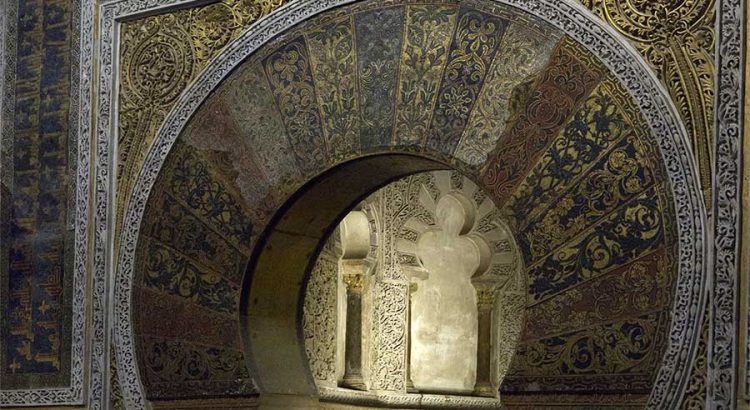 Mihrab at the Great Mosque of Córdoba

This talk briefly introduces the architecture and decoration of the mihrab of the Great Mosque of Córdoba. Taking the form of a discrete chamber, and richly ornamented with carved marble and gold mosaics, the mihrab is the focal point of the mosque’s prayer hall as expanded during the reign of the second Andalusi Umayyad caliph, al-Hakam II (r. 961-76).

Calvo Capilla, Susana. “The Visual Construction of the Umayyad Caliphate in Al-Andalus through the Great Mosque of Cordoba.” Arts 7, no. 3 (2018): 36.

Ruggles, Fairchild D. “From the Heavens and Hills: The Flow of Water to the Fruited Trees and Ablution Fountains in the Great Mosque of Córdoba.” In Rivers of Paradise : Water in Islamic Art and Culture, edited by Sheila Blair and Jonathan Bloom, New Haven: Yale University Press, 2009, 81–103.

A worksheet for this video is available here.

Glaire Anderson is Senior Lecturer in Islamic Art at the University of Edinburgh. Her scholarly work explores the art of al-Andalus and the early Islamic West. She is currently finishing a second monograph that explores medieval Islamic science and visual culture through the career of the ninth-century Cordoban polymath ‘Abbas Ibn Firnas, who is famous for an experiment in early human flight. She is also pursuing research on digital art history and heritage, and the Islamic visual culture of the Philippines.