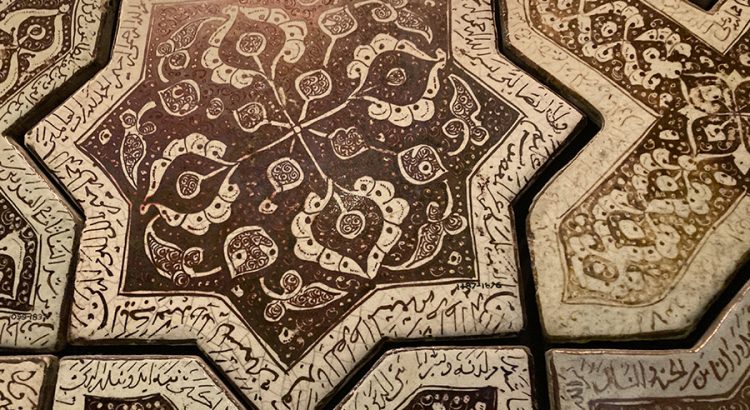 Persian Luster Tilework between the Field and Museum

During the 13th and 14th centuries, potters in the Iranian city of Kashan produced one of the world’s most sophisticated forms of tilework: luster, or zarrinfam. Distinguished by a metallic sheen that shined like the sun, luster was ordered for the finest palaces, mosques, and tombs of the day. Today, most luster tiles are held in museums. Focusing on religious sites in Mashhad, Natanz, and Varamin, this presentation recontextualizes “museumized” tiles within their original architectural homes. It also seeks to balance the study of luster tilework between Iranian and foreign museums and to consider the mutability of medieval monuments.

Blair, Sheila. “Art as Text: The Luster Mihrab in the Doris Duke Foundation for Islamic Art.” In No Tapping around Philology: A Festschrift in Honor of Wheeler McIntosh Thackston Jr.’s 70thBirthday, edited by Alireza Korangy and Daniel J. Sheffield, 407–36. Wiesbaden, 2014.

Rizvi, Kishwar. “The Other Side of Paradise, or ‘Islamic’ Architectures of Containment and Erasure.” Platform, June 24, 2019.

Keelan Overton (Ph.D., University of California, Los Angeles, 2011) is an independent scholar and historian of art and architecture specializing in the eastern Islamic world. Her publications have considered the historiography of Islamic art, the purveying of Iran’s cultural heritage, the life histories of manuscripts and buildings, and cultural relations between Iran and the Deccan. She recently published the edited volume Iran and the Deccan: Persianate Art, Culture, and Talent in Circulation, 1400-1700 (Indiana University Press, 2020). In fall 2021, she was a Getty Scholar at the Getty Research Institute in Los Angeles, where she worked on her book in progress entitled Iran Unglazed: Local, National, and Global Histories of Persian Tilework.