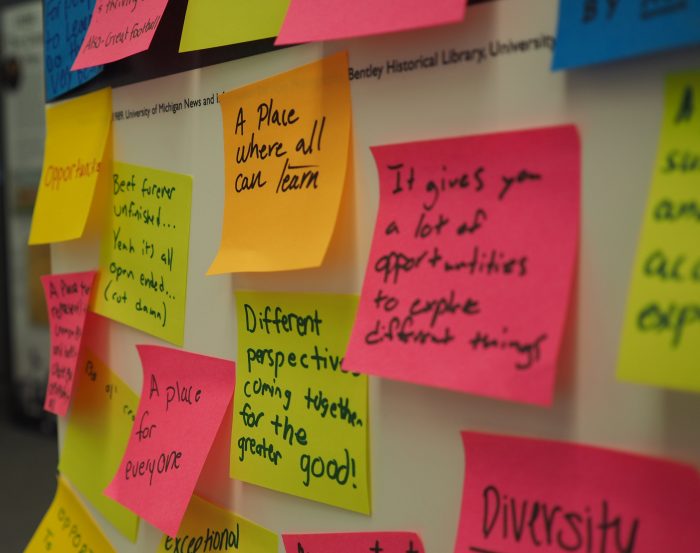 If you visited the bicentennial exhibit Forever Unfinished: Making and Remaking a Public University, you had the chance to stand behind the actual lectern used by university commencement speakers and consider what you would say if invited to give the keynote address.

You might urge the graduates to dedicate their lives to service, or attempt a joke about crushing student debt.

You might, as did the 1933 speaker, apologize for the “Heart-Break House of too much misery, of too much suffering” that confronted the young people sitting before you.

Or you might make a call to action, like Dana Greene Jr.’s recent letter to President Schlissel, “Why I Kneel.”

The beauty of a physical exhibit is that it invites conversation. Visitors walk through a physical space. The photos and stories elicit emotional responses that might be observed by others sharing the viewing experience. Their reactions become a sort of feedback loop incorporated into the exhibit itself.

What makes a university public? What should it look like? Whom should it serve? Who should have access to its resources, and where should those resources come from?

Our historical exhibit gathered two hundred years of answers to these questions from students, faculty, staff, politicians, and citizens. We also asked the viewers themselves to respond. Their answers—over 250 of them left on Post-It Notes, some of which are excerpted below—echo the histories we showcased, reflect our present moment, and imagine the future of U-M as a public university.

“Education that fosters a connection with your state.”
“Different perspectives coming together for the greater good!”
“Public = by and for The People”

Historically, demand for higher education opportunities from citizens and communities has spurred U-M’s growth. The vision of an educational institution stretching across the state has recurred throughout U-M’s two-hundred-year history. For example, when college-level classes started in Ann Arbor in 1841, seven towns already were running preparatory branches under the auspices of the university. Between 1837 and 1850, a total of thirty-two communities—from Marshall to Mackinac—petitioned for a local branch. By 1846, the regents had ceased funding branches altogether. Citizens and local communities also prompted expansion initiatives in the twentieth century, but Ann Arbor remained the center of the university.

But it’s not just about where the university is located. It’s also about who can afford to be there.

In 1933, the country was in the grip of the Great Depression. In the midst of severely slashed state funding, the university cut salaries, reduced classes, and eventually fired some faculty and staff. The commencement speaker that year, noted literary critic and U-M alumnus Christian Gauss, directly addressed the “fathers and mothers and citizens of the state” that were in his audience.

“You have taught our nation and the world that it is not only generous but wise to give youth free access to all the world’s learning. Remember that it is when states are troubled that the blinder, fiercer discontents arise and the need of education is greatest,” he said. Gauss went on to call for the state’s taxpayers to support greater funds for higher education.

On the other hand:
“A whole lotta debt J”
“Making out of state kids Pay WAY MORE.”

The campus community continues to grapple with questions of resources, access, and belonging.

“During the course of the last year I have watched as anti-Muslim, anti-Black, anti-Latinx, and anti-immigrant rhetoric has raced across our campus and across our country,” wrote graduate student Dana Greene Jr. in an open letter to President Schlissel in late September. “I can no longer stand silently by.”

Greene’s words corresponded to a series of student actions protesting acts of racial intimidation on campus, the marginalization of students of color, and the unfinished work of creating an equitable, inclusive university community.

Before sunrise on September 25, Greene took a knee in front of the block M in the heart of the Diag. Drawing on the form of patriotic dissent recently popularized by African American NFL players, Greene knelt facing the central campus flag well into the night. The same day, students of color and allies blocked access to a key transportation artery and bus stop. They were protesting and raising awareness of racist incidents on campus, specifically the disruption they make in the daily experiences of students of color.

These are just two actions for equity and inclusion that have taken place in recent weeks. Students and faculty have formally petitioned for the rechristening of a building named for the unapologetic eugenicist C.C. Little. Other students have rallied on the Diag to protest President Trump’s rescinding of the DACA program and the increase in violence directed towards undocumented immigrants.

We later discovered a copy of Dana Greene Jr.’s letter, “Why I Kneel,” on the commencement lectern in the exhibit. It’s impossible to know just who placed it, but the message was clear: If you talk about what makes a public university, you have to address issues of diversity, equity, and inclusion.

“Equality & inclusion for all because we all deserve to be here”
“A diverse student body in which students can learn about and from each other”
“Diversity! #More of the latinx community & people of color!”
“A university that is for the public, where everyone is welcome”
“The U should be listening to all sides!”

One lesson from U-M’s first two hundred years is that bold visions of diversity, equity, and inclusion have reshaped campus and its mission. Detroit residents successfully petitioned for credit-bearing courses to be offered in the city in the early twentieth century. The first Black Action Movement spurred some reform in African American student admissions in the 1970s. That same decade, grassroots student, staff, and faculty efforts led to the establishment of the Women’s Studies program. More recently, #BBUM focused renewed attention on the experience of students of color.

But the historical record also bears a harder truth: that the university, when confronted by larger political forces, has let those visions slip from view. In 1940, for instance, over a dozen students known for organizing laborers on campus or for protesting segregation in Ann Arbor’s restaurants received letters of dismissal from the university. In response to sharp drops in state funding for higher education in the early 1980s, U-M abruptly withdrew from its extension service outposts in Detroit and other cities around the state, ending a seventy-year mission of offering classes in communities where nontraditional students lived and worked. More recently, the confluence of national and state-level prohibitions against affirmative action has dismantled the Michigan Mandate and significantly reduced the percentage of students of color on campus.

The lingering question is this: Can the university sustain its commitment to diversity, equity, and inclusion when broader political currents seek to undermine those efforts?

We suspect the answers lies with students, faculty, and staff, the same people who have led these endeavors for nearly 200 years at the University of Michigan.

Forever Unfinished: Making and Remaking a Public University was installed in the Harlan Hatcher Graduate Library Gallery from September 5 to October 27, 2017, as part of the Bicentennial LSA Theme Semester. It was researched, written, designed, and fabricated by Jonathan Farr, Nora Krinitsky, Michelle McClellan, Gregory Parker, Emily Price, and Kate Silbert.