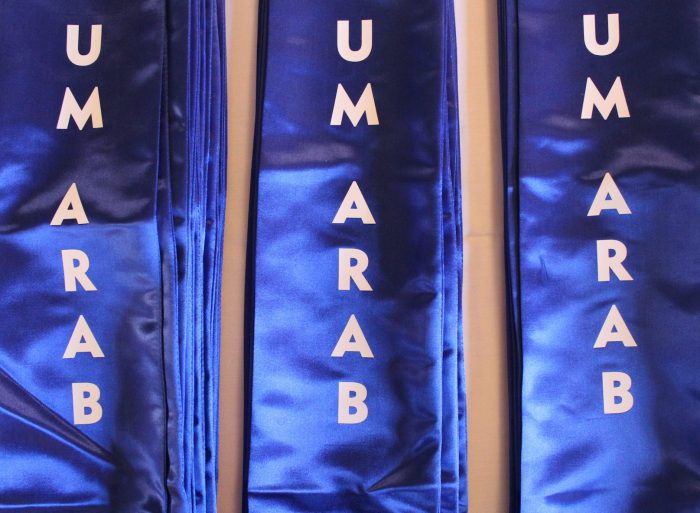 In this episode Dr. Samer Ali, Omar Hashwi, and Nour Eidy will explore how Arab students organized their own graduation ceremony, and in the process, wrestled with ideas of what it means to be “counted” and identified and recognized as a community.

Photo from left to right:

Omar is the West Coast Account Executive at Incorta. He consults enterprise corporations on their analytics technology and roadmap. In college, he served as the Vice President of the Central Student Government, Founder of the Arab Graduation Ceremony, and Founder of PILOT. He holds both his Master’s degree in Business Management and Bachelor’s degree in Middle Eastern Studies from the University of Michigan.

Nour is a freshman in the College of Literature, Science, and the Arts. Born in Beirut, Lebanon, she immigrated to Dearborn, Michigan at the age of five. She is actively involved in the Arab American professional development initiative, serves as the Director of Finance for PILOT, and assists in the organization of the Big Ihtifal-UM’s Arab American graduation celebration.

Samer is an associate professor in the Near Eastern Studies and author of Arabic Literary Salons in the Islamic Middle Ages. His research focuses on the intersections of power, identity, and language in the Middle Ages, and particularly how ordinary people embrace the Islamic humanities to gain respect and influence in society. Our identities are always changing, continuously repositioned and transformed through the cycle of socialization. They are influenced by space, time, history of culture, and exposure to social groups. Self-perception of our identities and our behavior in social spaces brings multiple identities that can create a sense of belonging and membership through shared experiences. Identities constantly intersect and influence multiple components of life and the different systems of privilege and oppression that derive from them. Identity intersectionality can then challenge difference and shape the way social systems and institutions distribute power. Our history shapes our conceptions surrounding identities and dictates groups we see, constructing a social framework of representation.

A fundamental part of student success is having the capability to critically think about our environment. As we embrace the challenges and opportunities that are transformative, we need to be mindful of the damage that needs to be undone (Boggs, 2012). Often, we learn to problem solve through our direct experiences and growing knowledge of how to navigate the various systems that are integrated into our society. Our feelings and beliefs are then examined through the impact of our work to move towards social change. Visually representing how different systems influence our experiences through our visible and invisible identities can grant privilege in some areas and disadvantages in other areas. As students of color, we often need to challenge perceptions and stereotypes to construct safe spaces for community building. This is important because different intersecting identities can often lead to continued oppression when certain parts of our identity are ignored (Crenshaw, 1993). Embracing differences and using it to empower others is one example in which students at the University of Michigan have learned to embrace each other and their identities to celebrate their experiences in spaces that are not always inclusive. Middle Eastern/North African (ME/NA) students at the University of Michigan have faced many difficulties finding representation where they can build community and celebrate their accomplishments. ME/NA students sought opportunities, and strategically gathered resources and support to build a space that recognized who they are. (Photo by Khris Sanchez, 2015) “The Big Ihtifal” was first created in 2015 through the need to recognize the large population of unrecognized ME/NA student graduates. The Office of Academic Multicultural Initiatives (OAMI) supported this student initiative of embracing individuality and culture through celebration and continues to provide an incentive for students to reach their goal of graduation. “Our cultural events celebrate the achievements, commonalities, and differences that characterize the experiences of African/African-American, Arab, Latino/a, and Native communities.” ME/NA graduates at the University of Michigan in Ann Arbor, Dearborn, and Flint continue to come together every academic year to celebrate their accomplishments and embrace their culture through performances, food, and community celebration. Although this celebration of ME/NA student graduates was a success, student representation on campus is still a continued fight. Recently, a campaign called #WeExist led by Jad Elharake, senior undergrad LSA, Nadine Jawad, senior undergrad in Ford, Yahya Hafez, graduate student in the Arab and Muslim American Studies Program, Ibtihal Makki, first year Pharmacy student, and Evelyn Alsultany, Associate Professor and Director of Arab and Muslim American studies program, has garnered support from the larger campus community to add Middle Eastern/North African identify category on all University forms and surveys that collect demographic data. Over 700 faculty and staff have signed a petition in support of this initiative, recognizing the importance of ME/NA student, staff, and faculty inclusiveness. This data is critical in addressing disparities, developing resources/programs for students, and tracking student, faculty, and staff recruitment and retention rates at the University of Michigan. Furthermore, this identity category would validate the experiences of ME/NA students on campus and acknowledge the unique needs of the community. Favor of creating the identity category was passed by Central Student Government and by LSA Student Government. Students continue to organize in efforts to show the University that they are not an “other” category and that they exist, they are valid, and the identify category box will serve as a symbol of recognition for all ME/NA students, faculty, and staff who have felt silenced and are now breaking barriers.