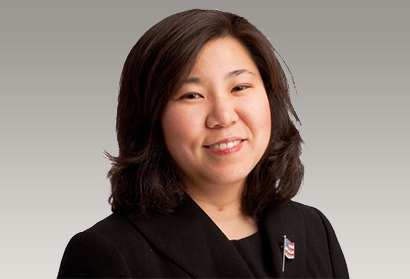 U.S. Congresswoman Grace Meng is serving her third term in the United States House of Representatives.  Grace was born and raised in New York City, attended public schools, and graduated from the University of Michigan in 1997. After attending Yeshiva University’s Benjamin N. Cardozo School of Law, she served as a public interest lawyer before being elected to represent Queens in the New York State Assembly in 2008 and the U.S. House of Representatives in 2012.

As a DNC Vice Chair, Grace has focused her efforts on representing new and diverse constituencies within the Democratic Party. During the 2016 presidential campaign, she focused her efforts on turning out voters in the major Asian American communities, resulting in almost double the rate of early voter turnout in those communities—and a dramatic increase in the number of non-English and new media outlets with which the DNC communicated.

Grace is the first Asian American Member of Congress from New York State, and the only Congressmember of Asian descent in the entire Northeast. She is also the first female Member of Congress from Queens since former Vice Presidential nominee Geraldine Ferraro. In Congress, Grace has focused her legislative efforts on vulnerable women and children as well as America’s minority and rural communities. She is a founding member and Co-Chair of the Bipartisan Congressional Kids’ Safety Caucus, Chair of the Congressional Asian Pacific American Caucus (CAPAC) Leadership PAC, and a member of the Democratic Future Forum.

Through her AT THE TABLE! PAC, Grace supported 11 successful minority candidates in their elections to federal office in 2016. She also serves as an original member of the Board of Directors of EQUALITY PAC, the political arm of the Congressional LGBT Equality Caucus, of which she is also a member.

Grace lives in Queens with her husband Wayne and their two sons, Tyler and Brandon.