How do we assign value? It often starts as a question of what benefits others or benefits ourselves. In our society we often measure that with money. Cold, dead cash. Pieces of debt.

Consider the vampire: for them the most valuable thing is blood. It’s food, yes, but it’s something more than that. It’s hard to say exactly what, just that it’s the most valuable thing. Vampires need blood with lust and hunger and curiosity: total desire. Of the many ways that death changes us, one way of describing it is the end of desire as we know it. And for mythology’s undead, the question of how to “keep body and soul together” transforms, but into what I’m not sure. Vampires are one of our favorite baddies. I was tempted to write lately at the end of that sentence, but their popularity has never really abated since the 19th century. After all this time in the sunlight and out of the spotlight, though, why do they still have the power to scare and seduce us?

I told a friend I was co-teaching a class called Vampire Poetics and he asked, “How do the kids like it?” I felt a little sheepish explaining that I was teaching other adults. Facilitating, really, more than teaching. Why did I feel sheepish? I guess it’s because, despite the fact that vampires are big and serious business, they still feel like kid stuff. There’s a passage near the beginning of Dodie Bellamy’s The Letters of Mina Harker, “KK gave me the first paperback edition of Dracula: 1947, when Literature was hardbound and everything else was SEX” (21). That was before my time, but I remember my grandparents occasionally giving me paperbacks from Walmart, COMPLETE AND UNABRIDGED and 2 for $1 stamped on the cover with lurid illustrations encasing books like White Fang or The Time Machine or Dracula. And as a sometimes bookseller and all around bookhound, I have haunted enough stacks to recognize mass market’s lurid and democratic legacy as it yellows and turns brittle.

Maybe I want it all: for vampires to be serious and forbidden at the same time, and this class is making me feel like it’s not too much to ask. Laura Moriarty pitched the class, then graciously invited me to co-teach it. We started with Dracula.

Does a case still have to be made that it transcends Victorian melodrama (or that Victorian melodrama needs transcending)? It’s a good starter for a class focused on vampires not simply because it is perhaps the most well-known, but because Stoker inaugurates the tradition of the overdetermined nature of vampire symbolism. Is Dracula about sexuality— queer sexuality, even? A very compelling case can be made. Is Dracula about colonialism and otherness? Not unlikely, considering Stoker’s own ambiguous position in 19th century British racial hierarchy. Does it touch upon the classic Gothic theme of the tension between science’s light and the unconscious’ shadow. No doubt. And yet, part of the poetics of the text is that it resists any definite aboutness. This is not to say that Dracula, or vampires more generally, are a completely open symbol. Rather, their value must be determined contextually, sensitively, and poetically.

But what are poetics? What are vampires? I feel like most people might think of the latter question as easier to answer, but when you start to drill down into the specific examples, as we’ve done some in class, the concept starts to shift. Some books or movies play up the mesmerism, some add a little touch like equipping the undead with an uncanny knowledge of martial arts. That vampires refuse to stand still is not only what makes them so hard to kill but also what has ensured their longevity as a cultural archetype.

We looked at Joseph Valente’s Dracula’s Crypt: Bram Stoker, Irishness, and the Question of Blood, before moving to Peter Linebaugh’s YPSILANTI VAMPIRE MAY DAY, which linked vampirism to corporate vampirism. We also considered Jalal Toufic’s (vampire): An Uneasy Essay on the Undead in Film. More recently, we have moved to Alice Notley’s Songs and Stories of the Ghouls. Technically a ghoul is not a vampire, but by Notley’s account, they eat blood sacks, so they’re fair game. It’s more difficult to sum up than Dracula, but from one vantage it is a nuanced take (multitude of takes) on women in history and myth, from Medea and Dido onward, who, because powerful, have been denounced, demonized. Speaking of Carthage, Notley asks, where is its poetry? Notley gives the aftermath of the long slow razing of a City of Ladies (with apologies to Christine de Pisan), and a salting of its fields. Notley writes in a Toufician mode, as a revenant. [Notley will be the subject of a symposium at the end of the month in Oakland]

And poetics? A quick search in the archive of this very blog reveals titles like, The Poetics of Reverie, A Poetics of Forgetting, Urban Poetics, and to artists as diverse as Joseph Cornell, Edmund Jabès, and Danielle Pafunda. This is not to say that vampire poetics, or poetics more generally, are a completely open category. It’s actually a very workaday term among the poets I know, who connect it to its etymological roots in the Greek verb to make. At its simplest level, poetics is the functioning of the made thing. Very nuts and bolts, but writers know that the mechanics of the poem (or novel, etc.) is where the poem happens, and so we find it very romantic. Somehow this reminds me of the plumber from Terry Gilliam’s Brazil. The closest thing the film has to a hero, he swings from building to building like Batman and he fixes ducts. This is also what I imagine when I see my radical friends get that longing look in their eyes as they utter the words, “Communization theory.” The poetics of utilities, the utility of poetics.

These words aren’t unusual to hear at the Bay Area Public School, or BAPS. At the end of the last Vampire Poetics class, we walked past a seminar on “Value, Capitalism, Communism,” central concerns for BAPS. During my time in the Bay Area, I’ve seen a tradition of reading and discussion groups held in living rooms coalesce, in the wake of the Occupy movement, into a radical free school. BAPS first shared a musty space in downtown Oakland with the SUDO Room, before joining up with other organizations to form the Omni Commons. It’s housed in the Temescal neighborhood’s storied Omni Building, which began its existence as an Italian social club before enjoying a second life as a metal venue in the 80s.

Vampire Poetics meets, fittingly, in a back room in the basement of the Omni. Just outside one of the doors are hulking rusty printing presses, soon to be put to work in print collective, just as Black Hole is a collective of artists working in photochemical filmmaking. 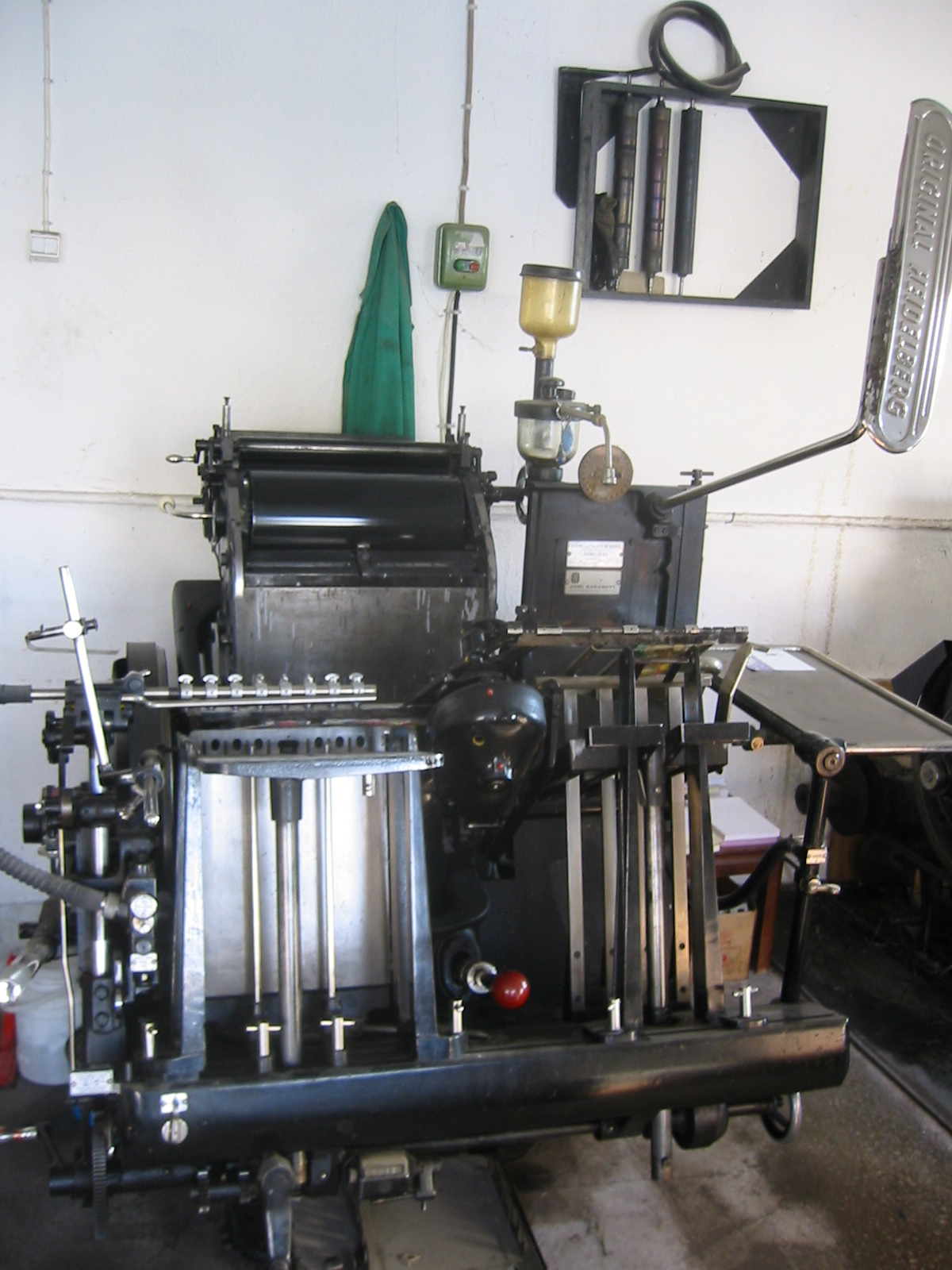 The objection could be made that this emphasis on materials-driven forms is the dreaded mark of the hipster. In Vampire Poetics, we’ve been having informal check-ins about our encounters with the supernatural, usually in media, so naturally, Jarmusch’s Only Lovers Left Alive (2013), with its characters’ fetishization of old tech, has come up. Are these tools decontextualized anachronisms reduced to conversation pieces?

As Black Hole’s description on the Omni site states:

We seek to build a collaborative space for the production and exhibition of work that locates its form and ideological function far outside of commercial industry structures and pursuits.

We do this at a time when those exact institutional power structures threaten the existence of the very physical material in which we work (celluloid) and endanger an entire tradition of culture it simply no longer deems profitable, further underlining the dual artistic and political importance of reclaiming these modes of production collectively.

Perhaps poetics is an answer for how we determine value, which would help explain the overlap of radicals and poets at BAPS and the Omni and Oakland in general. The audacious project is, like that of the living dead, one of learning how to live after— after money as the arbiter of all value.