“Querida Angelita,” nonfiction by Angela Morales, appeared in the Summer 2018 issue of MQR.

When Angelita arrived on our doorstep, she’d been living in the United States for only a few days — hours. I could not have imagined, at that time, her perilous journey and its resulting trauma, nor could I have appreciated the fact of her survival on that uncharted river of migrant travelers, with its snaking tributaries and unpredictable waters, particularly dangerous for a young woman traveling alone. Angelita would later tell my mother about how she’d boarded a bus somewhere in central Mexico, transferred to another bus, and another bus after that, until she reached downtown Tijuana, where she hurried, head down, to the nearest pay phone. She dialed a phone number that a friend of a friend had scrawled onto a scrap of paper. For the whole trip, she’d kept it stashed deep inside her jeans pocket, this little paper being her ticket to a job; and possibly to an American husband; to a little brick house with its own patch of grass and flower garden; and two or three or four fat-wristed baby boys, all nicknamed Gordo; and possibly, and most important, a few extra dollars wired from the 7-Eleven to her mother back home. Of course she knew nothing about this coyote-guy who would answer the phone, only that he came highly recommended, and that for a thousand dollars he could ferry her across to el otro lado.

Angelita, like most survivors of the journey, told only parts of the story, leaving gaps in time, omitting descriptions of certain places where the metaphorical river ran up into stagnant creeks, where the road hit cinderblock walls. No details of a certain holding-house, of a filthy bedroom filled with other girls and women. No discussion of threats and empty promises. And, of course, no words at all to describe the worst violations, words best abandoned in the desert, or in that house, or in that van; these were stories not to be repeated if one wanted to keep walking forward.

She did tell the story of climbing into the trunk of a car and, in pitch darkness, rolling across the Tijuana border, inch by inch, right through the international zone, buried beneath newspapers and junk-filled cardboard boxes, entombed between two strangers — both men — the three of them packed tight as tinned sardines and sharing the same fetid, exhaust-filled air. When they finally arrived in San Ysidro, California, she climbed out of the coyote’s trunk, where she was reborn, right there in the corner of a McDonald’s parking lot, parallel to the gargantuan 405 freeway, which looked that night like the tentacles of an electric octopus — bursts of white headlights and red taillights, swirling and whizzing by, right across the chain-link fence. She straightened out her creaky legs, adjusted the straps of her backpack, clutched her battered shopping bag, and began her life anew.

To continue reading, purchase MQR 57:3 or consider a one-year subscription. 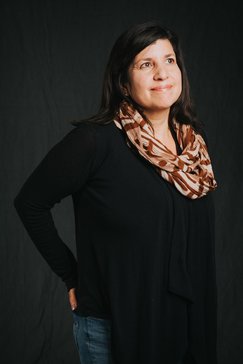 Angela Morales is the author of the essay collection The Girls in My Town, and winner of the River Teeth Nonfiction Prize and the PEN Diamonstein-Spielvogel Award for the Art of the Essay. Her work has appeared in Best American Essays, The Southwest Review, The Southern Review, and other journals and anthologies. She is currently working on her second essay collection. Find out more at angelamorales.net, or follow her on Twitter @professorbgirl.

About the author Angela Morales