This review of Caroline Johnson’s The Caregiver is published in conjunction with MQR’s forthcoming issue dedicated to Caregiving & Caregivers guest edited by Heather McHugh.

Adults that must arrange care for their parents or loved ones face a confusing, emotionally challenging task. Poems can capture the rollercoaster of feelings and offer close-ups of the experience, and Caroline Johnson’s The Caregiver (Holy Cow! Press, 2018) does both, offering honest and moving accounts of her own journey as caregiver to her aging parents. 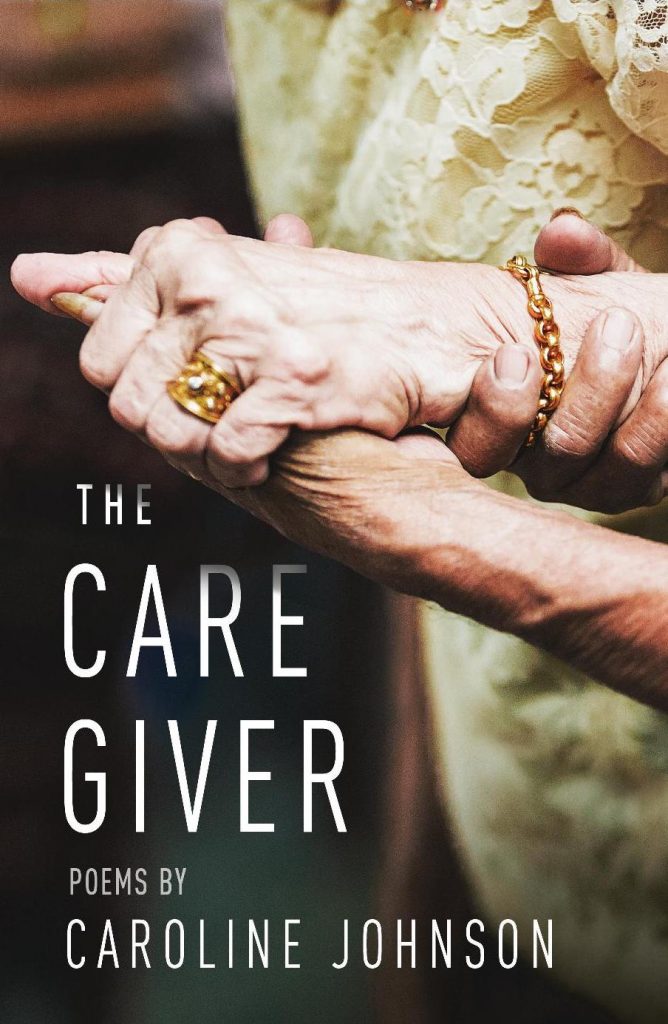 Johnson, a college advisor as well as a poet, was a caregiver for twelve years for her mother, who had Alzheimer’s Disease, and her father, who had Parkinson’s that was later diagnosed as the rare degenerative disease Multiple Systems Atrophy. In the book’s prologue, Johnson comments on the circumstances that informed many of the poems in the narrative, autobiographical book: watching films with her parents; learning about her father’s work as a bomber pilot in the Air Force during Cold War; and working with her parents’ principal and patient caregiver, Donna.

The book opens with the poem “Sunsets,” showing us the three of them together in the years of her mother’s Alzheimer’s Disease, watching Titanic: “Leonardo DiCaprio’s lips are turning blue. My mother’s / arms are scaly and dry. I put lotion on her arms. / I put lotion that smells like coffee on my father’s legs, / bright with red sores. I tuck them into bed / and spread the fat green comforter over them.”

The rest of the book is divided into three numbered sections — a first section of poems about her father, a second about her mother, and a third of her own grief over the loss of each parent, including the last, very long, stunning poem “Der Schrei” (“The Scream”), a piece that follows Allen Ginsberg’s “Howl” and begins:

who never complained about boiled broccoli or mashed potatoes

whose suppositories worked only sometimes

who woke in the night crawling, kicking, screaming, only to be pacified by Xanax and cranberry juice

who gave up their car, their cane, their wheelchair, and then their kitchen to move to a hospital bed

who smiled despite dementia and dentures

who fell down so many times we lost count, making dents in the plaster walls that we spackled and painted, and dents in the car from driving

who could recite the Gettysburg Address, look you dead in the eye and say they are proud of you, then ask who planted bombs in their bed

who cried and shrieked about what they saw in the yellow wallpaper, then turned over and went to sleep for good

who got angry and made fists and accusations, full of grief and depression and fear and terminal anxiety

who once flew a B-47 and made a hole-in-one and whose demented wife was always leaving for Alaska very, very soon.

In the book’s title poem, “The Caregiver,” Johnson reflects on her parents’ principle helper, Donna, who shows the poet what it means to care for another “beyond all thoughts of myself”:

See this Lithuanian woman. She has been
feeding my father dinners of mashed turkey
and broccoli, potato pancakes, washing his
clothes, bathing him, offering him the choice
between Wolf Blitzer and Vanna White for years.

Observe her hands as they gently push his body
to the side of the hospital bed. They are covered
with latex gloves. Consider the way she has taught
me to tenderly pull up his socks and cover him
with a quilt, put drops in his eyes, rub powder
on a rash, splash his neck with Old Spice, then
bend down to kiss his cheek goodnight

You must come closer, you must hang up your jacket,
be prepared to spend hours listening to his slurred
speech, help feed him applesauce with vitamins,
raise and lower his bed, monitor his erratic heartbeat.
Remember what he has given up—his Buick LeSabre,
his cane, his walker, then finally his wheelchair—to get
to where he now lives, a bed with guard rails.

Go to the night-stand and offer him a Frango Mint.
Put on his favorite Garrison Keillor CD. Listen as he
Smiles with his one good eye and whispers something
so faint, you ask him to repeat, “I’m lucky.”
Think about all this while driving the long way home.

You may get angry at the world, like I do, until you
see your husband asleep in the Lazy-Boy, bare legs
dangling. Until you suddenly realize what the caregiver
has taught you as, without a word, you slowly rub lotion
onto your husband’s chapped heels, then cover his ice-cold feet.

Animals that she’s encountered also enter the poems — turtles remind her of her father; a coyote crossing freeway traffic, of her mother. In “Coyote,” she writes, “You are like that coyote now — strong, free / and healthy — conquering all fears and / blissful of your surroundings. You have / crossed the road of troubles, and emerged to return into the forest of your life.”

In “Hospice,” a poem dedicated to her father, Johnson writes:

When you watch someone die
you must sit up close and open
your heart to pronounce each vowel,
you must let your loved one
embrace the air, let his arm
extend towards infinity,
you must help him
touch the stars.

When you watch your father die
remember it is a privilege
to stroke his stone cheek
to kiss his forehead,
to tuck his air behind his ears.
You must try not to be
so important, you must wave
when he decides to leave.

When you watch a bomber pilot die
who once got lost in the threshold
of a dream, remember he no longer
needs his walker, his cane, his wheelchair,
remember there will come a day
when he will no longer need you
will no longer need his body
though you will pray for him

to bring back the light as he flies
past one thousand sunrises in the sky.

These are skilled poems of Johnson’s own journey, and they speak movingly to the similar journeys of millions of caregivers.

Robin Chapman is Professor Emerita of Communication Science and Disorders at the University of Wisconsin-Madison, a poet, and a painter. She teaches poetry workshops at Bjorklunden and The Clearing in Door County, Wisconsin. She is author of nine full-length poetry collections, including most recently Six True Things (Tebot Bach, 2016) and The Only Home We Know (Tebot Bach, forthcoming).