From the Archives: Seven Rooms

The relationship between American and British poetry has often been one of divergent, complimentary strains. Just comparing The Guardian’s list of Top Books of Poetry from 2020 to NPR’s 2020 Poetry Review, it is clear, even now, that though excellent poets are present on both lists, there is very little crossover. Attempting to address this divide, Michigan Quarterly Review, in April of 1970, published an issue on British poets which Donald Hall described as “an interim bulletin from the poetic scene from England.” Among this “fragmented” bulletin was a mysterious, ekphrastic poem by George MacBeth that, since I first read in our archives, I have not been able to stop thinking about. The poem is both tender and sinister, simply told and yet deeply bizarre. It is a poem seemingly about torture, affection, and the afterlife ambiguously titled “Seven Rooms,” and, though we decided not to include it in our upcoming Anniversary issue, I believe it still deserves some attention.

At first glance, “Seven Rooms” appears to be a description of the infamous three-paneled Bosch painting, “The Last Judgement.” Each of the seven sections describes a small image within Bosch’s nightmarish landscape, which MacBeth describes as a “room.” We are guided through these rooms, as if on a tour, and at the end of each room we hear the simple, repeated phrase, “I touch you, very gently.” The effect is entirely bizarre. I cannot tell, even now, if the repeated touch is friendly, cruel, or something entirely else. By the poem’s end, I feel as though a distant friend has told me something intimate and compelling about their life, and yet I am no closer to understanding who the friend really is, or what they want from me.

To add to this perplexity, MacBeth’s descriptions of these “rooms” are told with startling simplicity. In this way, the poem is somehow both packed to the brim with imagery, and yet remains stark and cold. We see these judgments and tortures rendered by Bosch and feel removed. Yet after every description, we are touched, ever so gently. Is it by gentle touch from the divine, guiding us to see ourselves in these tortured figures? Or a gentle touch from MacBeth asking us to lean in closer, to step inside the room with the speaker, and perhaps be comfortable in not knowing where the room begins or ends. The answer to the questions, like the speaker of the poem, is elusive; and like Bosch’s original, remains both abstract and deeply compelling, worthy of being revisited again and again.

The Winter 2021 issue can be purchased here. If you want to explore MQR’s archives on your own you can visit them here.

Tagged with: Poetry, Why I Chose It

About the author George Mann MacBeth 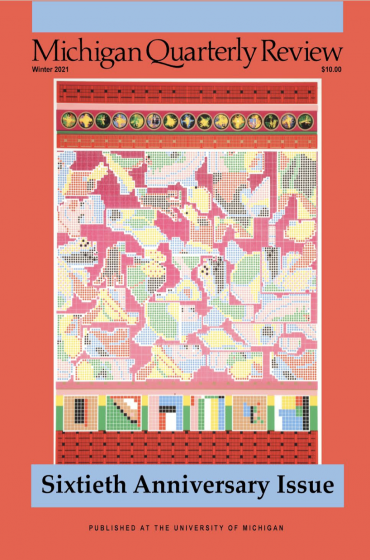