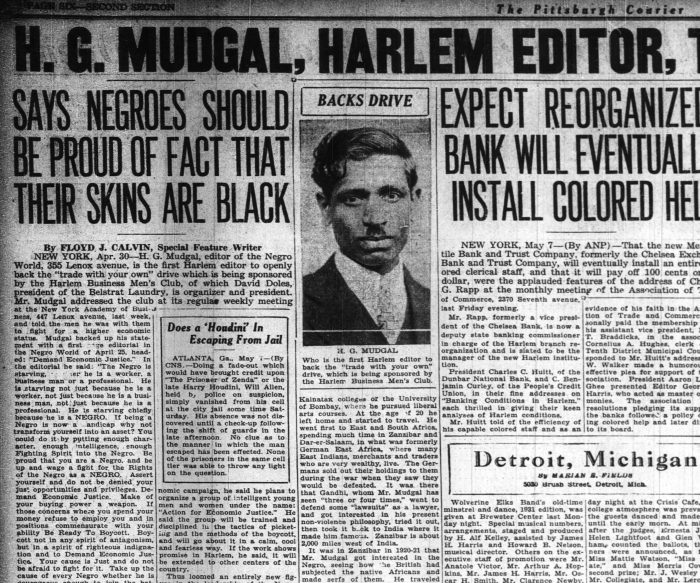 Over the Summer, I had the good fortune to work with Tizarat Gill, a recent UM graduate who also worked with SAADA through an internship, funded by the Center for South Asian Studies and sponsored by the Department of American Culture at UM.  Tiz and I worked on several projects, but the one that we spent the most amount of time on was a short biography of H.G. Mudgal.  Mudgal was a contributor and editor of Marcus Garvey’s newspaper The Negro World, during the 1920s and ’30s.  I’d heard about Mudgal over the years through several books on the interconnections between Black and South Asian communities, including Vijay Prashad’s Everybody Was Kung-Fu Fighting, Gerald Horne’s The End of Empire, and Nico Slate’s Colored Cosmopolitanism.

During her internship period, Tiz dug up a lot of newspaper articles and some census information.  She also got her hands on one of Mudgal’s pamphlets, titled “Marcus Garvey — Is He A True Redeemer of the Negro?” at the Labadie Special Collection at UM.  The piece we worked on together is up on SAADA’s website Tides today in honor of the start of Black History Month: “H.G. Mudgal, Harlem Editor”

There are still many questions about Mudgal that remain.  For one, I think there’s more to research about his period of travel in Africa.  A Pittsburgh Courier piece from 1931 describes Mudgal’s time in Zanzibar and South Africa as a period of political awakening:

“At the age of 20 he left home and started to travel.  He went first to East and South African spending much time in Zanzibar and Dar-er-Salaam (sic), in what was formerly German East Africa, where many East Indians, merchants and traders who are very wealthy live.  The Germans sold out their holdings to them during the war when they saw they would be defeated.  It was there that Gandhi, whom Mr. Mudgal has seen ‘three or four times,’ went to defend some ‘lawsuits’ as a lawyer and got interested in his present non-violence philosophy, tried it out, then took it back to India where it made him famous. […]

“It was in Zanzibar in 1920-21 that Mr. Mudgal got interested in the Negro, seeing how the British had subjected the native Africans and made serfs of them.  He traveled south studying the Indian and African situation, coming on down through the province of Natal and visiting the city of Durban, to Cape Town.  He wrote articles about his observations in the Mahratta, a Sunday paper devoted to political, social, religious and literary matters, published in Poona, India, near Bombay, and was harshly atacked by the English labor press in South Africa for his views.”

What exactly was in those Mahratta editorials?  While the piece goes on to describe how Mudgal found work with the African American press after being shut out of white newspapers, how much did his experiences in Africa — as well as other outposts along the African diaspora (Santo Domingo, Barbadoes, and Cuba) — affect his political outlook on race?  Another question that kept coming up in our research was Mudgal’s time in Trinidad; the historian Tony Martin, who has written several important works on Marcus Garvey, mentions that Mudgal was born in Indian and emigrated to Trinidad, which many subsequent monographs cite.  Learning more about that period of time would be valuable.

I’m including the files Tiz and I dug up — most from Proquest and other newspaper databases — for anyone who would like to further pursue Mudgal’s story.  I hope they are helpful, and look forward to learning more.