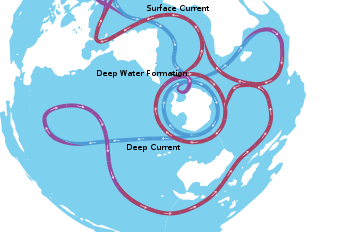 Thermohaline circulation (THC) is a part of the large-scale ocean circulation that is driven by global density gradients created by surface heat and freshwater fluxes.[1][2] The adjective thermohaline derives from thermo- referring to temperature and -haline referring to salt content, factors which together determine the density of sea water. Wind-driven surface currents (such as the Gulf Stream) travel polewards from the equatorial Atlantic Ocean, cooling en route, and eventually sinking at high latitudes (forming North Atlantic Deep Water). This dense water then flows into the ocean basins. While the bulk of it upwells in the Southern Ocean, the oldest waters (with a transit time of around 1000 years)[3] upwell in the North Pacific.[4] Extensive mixing therefore takes place between the ocean basins, reducing differences between them and making the Earth’s oceans a global system. On their journey, the water masses transport both energy (in the form of heat) and matter (solids, dissolved substances and gases) around the globe. As such, the state of the circulation has a large impact on the climate of the Earth.