Project Community (PC) is one of the longest-running community-engaged learning programs in the country. The rich history of PC spans over six decades. Project Community’s first beginnings were influenced by John F. Kennedy’s 1960 speech atop the steps of the Michigan Union that led to the establishment of the Peace Corps and his famous inaugural address in 1961 when JFK urged Americans to “ask not what your country can do for you, ask what you can do for your country.”

In response to John F. Kennedy’s vision for a new era of peace, justice, and equality and the growing Civil Rights movement, Project Community was created by U-M student activists in 1961. In particular, Charles “Dick” Richard Sleet, an undergraduate student majoring in Psychology, saw an opportunity to engage in social action with fellow University of Michigan students and community members.

Project Community transitioned from a student-led organization to developing partnerships with the Department of Sociology, Department of Psychology, and the School of Education during the 1960s and 1970s. Dr. Mark Chesler was the first Program Director for Project Community, and created opportunities for students to earn course credit for their community engagement. The current name of the program, Project Community, was formerly adopted in 1970.

The Black Liberation School was founded in 1971 with the goal of addressing educational inequalities that were affecting Black students. Project Community had previously developed the Black Tutorial Program to address similar social issues. However, because the volunteers taking part in the Black Tutorial Program were predominantly White, it was determined that the program needed to be restructured.

Thus, the program was revamped and renamed the Black Liberation School, under full leadership of Black parents, teachers, and PC students. The program consisted of weekday breakfasts with Saturday tutoring sessions during the school year and Summer programming. Additional activities, such as rollerblading, dance, and crafts were also included. Students were encouraged to express themselves through art and writing activities, where they discussed the narratives of Martin Luther King Jr., Eldridge Cleaver, and other Black leaders. The principles of the Black Liberation School remain central to the Education focus area today, which is committed to supporting the academic and social-emotional learning of K-12 students.

The Inmate Project began in 1972. The aim of this endeavor was to meet the needs of individuals involved in the Criminal Justice system by engaging in advocacy efforts, facilitating creative arts workshops and other enrichment activities, and providing social support. Students volunteered at various community sites including juvenile halls, detention centers, jails, and prisons in the Metro Detroit area. The Inmate Project also created the Ex-Offender Contact Center in the 1970s. PC students in the Criminal Justice focus area continue to work with currently or formerly incarcerated individuals across the state of Michigan.

Project Community has evolved to reflect the changing times within the University of Michigan, Metro Detroit area, and the United States. PC sites have met the needs of the community, and the program itself has continually adapted to administrative changes at U-M. Through it all, PC has maintained strong partnerships with the local community and allowed students to gain valuable community-engaged learning experiences. Though things have changed over the years, one motto still rings true: Project Community is “…where service and learning intersect.”

During the 1980s, Project Community became involved with the Ann Arbor Schools Desegregation Movement and Consumer Advocacy Services, which provided tax assistance and tenant’s rights advocacy. The Migrant Labor Camp Project, where students worked with migrant labor workers in Michigan to promote better education and greater awareness of migrant rights, was also a notable PC program in the 1990s. Over the course of its history, Project Community has collaborated with other U-M programs, including Project SERVE, the Markley 21st Century Scholars Program, the Michigan Community Scholars Program (MCSP), and the Prison Creative Arts Project (PCAP). Project Community also shifted from being housed in the Office of Student Services to the Center for Community Service and Learning, which was founded in 1997 and later became the Ginsberg Center.

Project Community has been featured in several academic publications and scholarly papers. Former PC administrators, Jeff Howard and Joe Galura, published the Praxis I, II, & III series on service-learning through the OCSL Press, which was one of the first works of its kind. Several articles by former PC Director, Mark Chesler, and other Project Community-affiliated faculty, staff, and students have also appeared in the Michigan Journal of Community Service Learning. The scholarship on Project Community has highlighted the connection between service-learning and positive learning outcomes during students’ undergraduate years, and fostered the establishment of community-engaged programs similar to PC across the country.

Dr. Ian Robinson served as the Program Director during the 2000s and 2010s, and PC shifted from being housed in the Ginsberg Center for Community Service and Learning to the Department of Sociology in Summer 2013.

Project Community’s sites continues to shift and evolve, allowing the program to maintain existing relationships and establish new community partnerships in order to meet the needs of the Ann Arbor, Ypsilanti, and Detroit communities. Current sites, such as the Ann Arbor Public Schools and Washtenaw County Jail have partnered with PC since the 1970s. Some of Project Community’s newest sites include Ypsilanti Meals on Wheels, the Hope Clinic, and the American Friends Service Committee (AFSC)-Criminal Justice Program. PC currently provides community engagement opportunities in three focus areas: Criminal Justice, Public Health, and Education.

PC is now located in the College of Literature, Science, and the Arts (LSA) Building and Dr. Rebecca Christensen has served as the Director of Project Community since Fall 2017. The current structure of PC exists as two 4-unit, graded courses. Sociology 225 (Project Community: Sociology in Action) serves as the introductory course, which integrates weekly on-site or remote community engagement with simultaneous learning in the classroom during lecture and discussions sessions. Sociology 325 (Project Community Advanced Practicum) is the advanced course that allows students to continue working with their previous community partner or another Project Community-affiliated site, along with developing their own community-engaged project.

Despite its changes throughout the decades, Project Community is committed to helping students develop a critical consciousness of social inequalities and explore social change at the individual, community, and societal level. Project Community remains dedicated to building mutually beneficial relationships between students and community members, promoting social justice both in the classroom and community, and fostering social action among undergraduate students during their time at U-M and beyond.

Cassidy Guros wrote the majority of the “Our History” webpage in December 2018. She served as a research assistant for Project Community as part of the Sociology Opportunities for Undergraduate Leaders (SOUL) program. She was also a PC student during the Winter 2020 semester, and worked with UNIFIED HIV Health & Beyond in the Public Health focus area. She developed the content of the webpage by reviewing the Project Community archives, scanning photos and documents in the Bentley Historical Library, and interviewing former PC directors and administrators. Cassidy obtained her BA in Sociology and Women’s Studies in May 2020.

Mariah Benford conducted and transcribed interviews with former Project Community staff members and alumni. She also located and collected notable Project Community publications and scholarly papers. She was a SOUL research assistant for Project Community for the 2019-2020 academic year, and a PC student during the Fall 2020 semester where she worked with Brilliant Detroit in the Education focus area. Mariah will graduate in May 2021 with a BA in Sociology and Social Work.

Dr. Rebecca Christensen, the current Director of Project Community, oversees the PC research team and is continuing to document the program’s history. She revised and updated this webpage in December 2020. 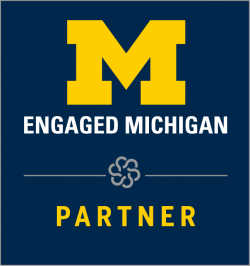