This episode, which is part of the “Frankely Judaic” podcast, discusses the convert Abner of Burgos (Alfonso of Valladolid) (ca. 1270–ca. 1347) and the anti-Jewish riots of 1391.
Available HERE or copy and paste this address:
https://soundcloud.com/user-780716487/ryan-szpeich-he-is-still-israel-conversion-and-sephardic-identity-before-and-after-1391

Ryan Szpiech delivered a lecture at the University of Salamanca in May, 2018

In May 2018, I delivered a lecture at the University of Salamanca and the University of Granada. The video of the lecture, “¿En camino a 1391? Abner de Burgos/Alfonso de Valldolid sobre la conversión forzosa,” as delivered in Granada on May 18, 2018, is NOW AVAILABLE ON YOUTUBE HERE.

In December 2014, I delivered a joint lecture with Thomas Burman on the writing of Catalan Dominican Ramon Martí. The video of my portion of the lecture, “A Two-Sidded Dagger: Ramon Martí’s Philosophy of Language and Mission,” is NOW AVAILABLE ON YOUTUBE HERE.

Conversion and Narrative has been awarded the
2015 La Corónica International Book Award!

See HERE FOR THE ANNOUNCEMENT.

Presented at the 2015 Medieval Congress in Kalamazoo, MI

On October 28–29, 2015, I will be presenting a paper “Jews Forcing Jews: The Story of the Forced Conversion of Iberian Karaites in the Anti-Jewish Writing of Abner of Burgos” at the conference “Pouvoir politique et conversion religieuse 2: ‘Signes et scènes'” to be held at Université Paris-Est – Marne-la-Vallée.

On February 23‒25, 2015, I presented the paper “From convert to convert: On the medieval parallels and predecessors of the Pfefferkorn-Reuchlin debate” at the conference “’Noviter in lucem data iudeorum secreta’. Johannes Pfefferkorn’s Campaign against the Jews: Antisemitism and Ethnography in the Sixteenth Century” in Uppsala University, Sweeden.

On February 26, 2015, I gave a lecture at the Centre for Medieval Literature at Southern Denmark University, Odense, Denmark, entitled “Brothers of Lot, Children of Abraham: Captivity and Medieval Polemical Literature.”

December 5, 2014 (3pm), I gave a joint lecture with Thomas Burman (University of Tennessee) at the Ohio State University Center for Medieval and Renaissance Studies entitled “The Polemics and Projects of Ramon Martí O.P.: Debating the Legacy of Medieval Iberia’s Greatest Linguist.”
For more information, see HERE. 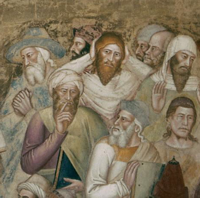 On September 29–October 4, 2014, I participated in the “Polemical Encounters” conference in Madrid at the CSIC-CCHS where I presented on  “Prisons and Polemics: Captivity and Inter-Religious Encounter.” For more information, see HERE

On October 25–26, 2014, I participated in the conference “International Networks and National Frameworks of Medieval Studies” at Fordham University where I presented on “From Father to Son: Ways of Reading the Alfonsine Tradition, 1250–1350.”