The article was published in the Washington Post: https://www.washingtonpost.com/outlook/2020/06/14/restaurants-may-be-reopening-will-dining-out-be-same/

Restaurants may be reopening, but will dining out be the same?

Conviviality makes dining out fun, but it’s not conducive to social distancing

Shachar Pinsker is a professor at the University of Michigan and the author of “A Rich Brew: How Cafés Created Modern Jewish Culture.” 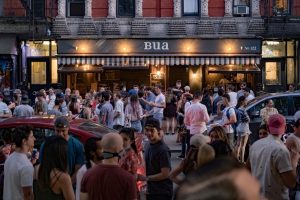 People drink outside a bar during the reopening phase following the coronavirus outbreak in the East Village neighborhood in New York on Friday. (Jeenah Moon/Reuters)

When the French Economy Minister Bruno Le Maire declared France would relaunch economic activity in early May, he explained the plan was to open all businesses “with maximum sanitary measures, except for places of conviviality such as restaurants, cafes, and bars.” Something similar has happened in the United States as states have slowly reopened over the past six weeks: While restaurants are open for indoor dining in some places — often with limits on how many people are permitted inside — in other states only outdoor dining is allowed, and in still others, even outdoor service remains heavily restricted. When images of packed bars and restaurants — even outdoor ones — circulate online, there is often an alarmed reaction, either over people not wearing masks or not social distancing, as happened in New York on Friday and Saturday.

But this backlash and the limits on dining and bars raises the question: When will restaurants, cafes and bars fully reopen? National and local authorities, business owners and the public at large have pondered — and tried to balance — the economic and health ramifications and possibilities of reopening with social distancing requirements. But is there an economically viable way to do so for most establishments? If yes, what should these spaces look and feel like? The uncertainty around these questions gives us an opportunity to think about the role of these businesses not just as sites of consuming food and drink, but also as institutions of conviviality over the past two centuries. This cultural importance is one reason people are so eager to see these establishments open and lively again, but it also helps explain why doing so at safe social distance is difficult.

People have been eating and drinking together since the dawn of civilization, but before the 18th century they largely did so inside their homes with their own families, or with people from the same socioeconomic status and educational background. Commercial, public drinking establishments (for wine, beer and other alcoholic drinks) outside the house appeared by the late Middle Ages in Europe. Utilitarian in decor, and providing little more than tables and chairs in one or two rooms, they could be rowdy and disreputable, and were principally neighborhood centers serving mostly the male working poor. In North America, until the mid-18th century, taverns were mostly run out of private residential houses.

Additionally, urban coffeehouses in the Ottoman Empire, Christian Europe and North America existed beginning in the 16th century, because of the difficulty of roasting and brewing coffee at home. They were different from drinking establishments because they did not serve alcohol, and their atmosphere encouraged reading and discussions of politics and culture. Yet, while these coffeehouses were places of sociability, by and large they were truly open only to social interaction for men of certain educational attainment and status in society.

This all changed in the 18th and 19th century, thanks to abolition of guilds and changing ideas related to conviviality and sociability. The word “conviviality” comes from the Latin convivium, combining the roots for “with” and “living.” In all Latin-based languages, the word initially meant a feast and later shifted to indicate “one with whom we share a table.” In this period, conviviality became linked to the activity of eating and drinking together. Sociability, in turn, came to be seen as invariably tied to urban institutions of food and drink open to everyone, and with the small-group rituals and social bonding associated with them.

The modern restaurants, cafes and bars so missed by many today, also emerged around the time of the French Revolution. Changed values cemented their status as popular places of consumption of food and drink, leisure and sociability for the middle and working classes, in addition to elites. The strict lines that separated coffeehouses from taverns, wine houses, inns and pubs became more blurred, and cafes, now serving coffee and alcohol, fostered sociability for people of different socioeconomic backgrounds — at least in theory. They also enabled and encouraged creativity and exchange of ideas in journalism, literature, art and politics. In the North American colonies, around the time of the American Revolution, public taverns began to provide a setting in which citizens from all walks of life swapped ideas while enjoying beer or cider.

Although these spaces attracted mostly men, women would join them occasionally.

The Western restaurant had first appeared in Paris in the second half of the 18th century as a food shop selling one dish: bouillon, a slow-simmered bone broth or consommé. But in revolutionary-era France, the culture and practices of these spaces changed, with Paris serving as a laboratory of sorts for them.

Restaurants expanded their menus and became widely popular. Instead of catering to aristocrats, who had cooks working for them, or to the occasional travelers who ate what the owner of an inn prepared, they attracted the bourgeoisie, the new middle class. One ordered at will from a menu instead of taking what an innkeeper was serving.

But it wasn’t food alone that created the allure of these places — their unique culture drew people in. In his pioneering 1825 book, “The Physiology of Taste,” the politician, lawyer and gastronome Anthelme Brillat-Savarin claimed “[t]he spirit of conviviality […] brings different social classes together every day, gives them a single goal, stimulates conversation, and softens the angles of ordinary inequality.” He was one of the first to express the idea that conviviality was not just the pleasure of eating and drinking well but also of practicing the communal exercise of conversation.

Throughout the 19th century, restaurants in Paris and other cities around the world became popular places to experience and to create national cuisine, meet friends or a date, and share meals and conversation. The custom of setting restaurant tables at a little distance from each other was essential to its conviviality. It made it possible to watch and be watched, to eat in private and in public simultaneously, and to take part in these spaces that were as much cultural as they were gastronomical.

Because of the current pandemic, most of these places are in a state of flux. When and if they do fully reopen, their design and feel necessarily is going to be different as long as we have no medical cure or vaccine for the coronavirus. That opens up the possibility that we’re entering a moment of social change similar to the one ushered by the revolutions of the late 18th and 19th centuries. The very fabric of our urban life, especially in the great metropolises such as Paris, New York City and Los Angeles, is mired in doubt and uncertainty.

Owners of independent restaurants, cafes and bars and policymakers are slowly coming up with guidelines and business models that might work for the industry in the near future. But they, and the public — all of us who love visiting these places and are willing to pay for the experience — must think about how what makes these establishments unique and loved is not just the quality of the food and drink; otherwise delivery and curb pickup services would suffice. What is sorely missing is the sense of conviviality in these spaces.

The late urban planner and anthropologist Lisa Peattie wrote, “Conviviality can be encouraged by the right rules, the right props, and the right places and spaces.” The props and spaces that developed in the past 200 years to enable conviviality and sociability in commercial businesses will have to be re-created alongside the new health and safety measures and business models. If owners and policymakers fail to understand the experience is as important as the food and drink, our attempt to reopen restaurants, cafes and bars may flop.