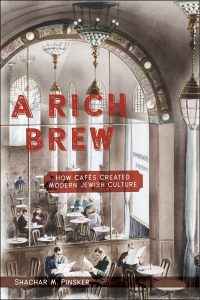 Adam Gopnik in The New Yorker: 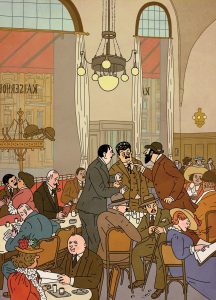 Shachar Pinsker’s “A Rich Brew: How Cafés Created Modern Jewish Culture” (New York University) might seem, at a glance, like one of those “Bagels of Our Fathers” books that a Leo Rosten could have written back when Jewishness, as a cultural subject, still struck Americans as fresh and mostly funny. The cover shows an appealing pastel of a sunny, amazingly high-ceilinged and arch-filled café in Berlin—a lost Eden of conviviality and conversation. And the book itself is hugely entertaining and intimidatingly well researched, with scarcely a café in which a Jewish writer raised a cup of coffee from Warsaw to New York left undocumented. Yet it’s really a close empirical study of an abstract political theory…that the coffeehouses and salons of the seventeenth and eighteenth centuries helped lay the foundation for the liberal Enlightenment—a caffeinated pathway out of clan society into cosmopolitan society. Democracy was not made in the streets but among the saucers.

Jeffrey Yoskowitz at In Geveb: A Journal of Yiddish Studies:

Pinsker packs his history with titillating behind-the-scenes snapshots of a cast of fascinating and enigmatic Jewish figures in cafés throughout history, including luminaries such as Moses Mendelssohn, Karl Marx, and Theodor Herzl. It’s a rather ingenious organizing principle for the book: since there was so much cultural output produced in cafés and, consequently, about them, the author is granted the latitude to quote rich passages from seminal works of Hebrew and Yiddish literature to put them in context.

Seldom have I accepted a scholarly premise as trustingly as I did Mr. Pinsker’s notion that Jewish culture was born in a café. If it wasn’t, it probably should have been

In A Rich Brew, Shachar Pinsker masterfully documents the impact of café life on Jewish culture throughout the civilized world. He focuses on six essential cities—Odessa, Warsaw, Vienna, Berlin, New York and Tel Aviv/Jaffa—creating overlapping storylines that are not always chronological. A professor of Hebrew literature and culture at the University of Michigan, Pinsker has a deep knowledge of modern Jewish literature, which he mines to good effect in this book.

Mikhail Krutikov in the Forward

The reader learns that cafés in Europe, America and Israel were indeed highly productive spaces where people wrote, read and frequently debated questions of modern Jewish culture…Pinsker takes the reader on a journey across the important centers of modern Jewish culture: Odessa, Warsaw, Vienna, Berlin, New York and Tel Aviv, using a host of different sources and making for a captivating read.

Avery Robinson in The Marginalia Review of Books

In A Rich Brew, Professor Shachar Pinsker illuminates this improvisational home of Jewish intellectuals who, having left the world of their parents (e.g., the rural shtetl of Eastern Europe) created a new community of culturally and socially engaged souls. At the forefront of modern literature in Hebrew, Yiddish, Russian, and German, these intellectuals laid the groundwork for an alternative beit midrash(Jewish house of study), engendering an emancipated individual home for these “Jews on the move.” Weaving stories of writers, artists, activists, and revolutionaries in the cafes of Odessa, Warsaw, Vienna, Berlin, New York City, and Tel Aviv, Pinsker takes us on a journey from Moses Mendelssohn’s philosophical writings in Berlin’s Gelehrtes Kaffehause in 1755 to the funeral of the last Yiddish-speaking café owner in 1979 Tel Aviv, “attended by a crowd of thousands.”

makes clear the vital role literary cafés played in 19th- and 20th-century Western Jewish culture in this smart volume. By examining the history of cafés in six cities—Odessa, Warsaw, Vienna, Berlin, New York City, and Tel Aviv–Jaffa—Pinsker demonstrates how cafés served as venues for intense exchanges “between Jews and non-Jews, and between Jews of different political and cultural orientations.” Pinsker also highlights the importance of cafés as intimate meeting places that enabled the development of a sense of community for Jews who migrated to large, impersonal cities from small towns, or to a new and unfamiliar country. To buttress his case, Pinsker makes an impressive list of writers and thinkers who found intellectual homes in cafés— S.Y. Agnon, Emma Goldman, Heinrich Heine, Theodor Herzl, and Isaac Bashevis Singer among them…Pinsker’s approachable book explains the vital role cafés and salons played in the development of

Today’s coffeehouses are typically filled with impatient patrons waiting for lattes to go, or remote workers transfixed by their laptops. In other words, they have no resemblance to the cafés described in Shachar Pinsker’s absorbing new work of nonfiction, A Rich Brew. Pinsker uses the café as a vehicle both to describe the development of modern Jewish culture, and to delve into the topics that drove its progression. The impact of immigration, Zionism, and capitalism is explored through the rise of the café, particularly from the late nineteenth to the mid-twentieth century.

In this invigorating book, literary scholar Shachar M. Pinsker argues that in the 19th and 20th centuries a loose network of cafés across Europe and beyond became “a silk road of transnational modern Jewish culture” (18). The café was not merely a place of idleness or sin, as its critics argued, nor was it the totally egalitarian space of public discourse that peaked in the 18th century, as Jürgen Habermas has argued. Rather, as Jews became emancipated and migrated to urban centers, cafés became crucial “thirdspaces,” sites of intense mediation between the various dualities of modern culture—including the  “private and public, professional and recreational, bourgeois and bohemian, and literary and consumer culture” (9)…Beyond illuminating the pathways of modern Jewish culture, A Rich Brew shows how central both Jews and spatiality can and should be to our understandings of religion in modernity.

Shachar M. Pinsker’s A Rich Brew: How Cafés Created Modern Jewish Culture takes you to the coffeehouses that became the urban refuges of Jewish writers, thinkers, political activists and even gangsters from the mid-19th to the mid-20th centuries after they left behind their close-knit villages…This meticulously researched book pays tribute to an electrifying network of cafes that once incubated modern Jewish culture. “The most eye-opening aspect of Pinsker’s discussion of European-based Hebrew modernism as a sub-set of European modernism proves to be his detailing of the continuing presence of religious experience in this literature . . . Pinsker’s book might just be a passport for a whole literature and its critics.”

“Pinsker argues vigorously in his extraordinarily impressive book that this Zionist teleology distorts the fundamental character of European Hebrew literature in the early twentieth century. Pinkser’s study is based on wide-ranging and thorough research that includes scrutiny of many forgotten texts and also actual visits to the places where Hebrew writers gathered . . . Literary Passports performs a valuable service in reminding us how rich and varied [poetic interpretation] was.”

“Pinsker’s book is thus an important contribution to new modernist studies, a field which looks to expand the scope of the research on modernism beyond the classical German, French, English, and Russian mainstream depictions of this movement. Pinsker succeeds in showing that Hebrew prose is a contemporary of European modernist writing and is an active participant in modernist European movements of decadence and symbolism.”

“Pinsker is conversant with and often insightful about the development of European literary culture, so this study turns out to be just as exciting an exploration of Western cultural themes as it is of early Hebrew ones.”

“Professor Pinkser’s learned and lively exploration provides not only a rich theoretical context for examining a largely undiscovered body of important Modernist texts, but also a series of close, often original, readings. He offers a fine blend of lucidity, passionate attention, and intellectual play.”

“Literary Passports… hardly mentions Kafka, since he wrote in German, not Hebrew or Yiddish, yet succeeds in throwing genuine new light on him. Pinsker is concerned to rescue writers of Hebrew and Yiddish poetry and fiction in the early years of the twentieth century, who were in large part Russian, from the Israeli narrative in which they have usually been placed. Rather than as forerunners of a vibrant Israeli literature, he argues, we must see them as rooted in European modernism, sharing many of the same interests and obsessions as their non-Jewish contemporaries all over Europe.”

“Into this huge scholarly gap between Odessa and Tel Aviv, enters Pinsker’s impressive, comprehensive research shedding a new light on it. … Pinsker’s is the flickering and elusive light of modernism, which enabled a group of Jewish authors, wandering throughout the continent of Europe at the turn of the century, to explore their homelessness and lack of national affiliation via a new artistic medium…Throughout the book, he conducts a fascinating examination of these writers’ poetics and the European experience facilitating them, moving between three prominent realms of modernity: urban experience and the ways in which it shaped turn-of-the-twentieth-century Hebrew literature; the shifting terrains of gender and sexuality; and the effects of modernity on religion.”

“Shachar Pinsker’s Literary Passports is a major study of early twentieth-century Hebrew fiction in the Russian and the Austro-Hungarian empires and the problems of urban experience, sexuality, and religiosity that framed its creation. It should be read not only by scholars of modern Hebrew literature, but by anyone interested in Jewish literary history generally, the history and theory of modernism, and the impact of the specific modernity of urban Europe on Jewish culture and consciousness.”

“Pinsker’s Literary Passports is one of the most impressive books to come out of what may
be called the University of California-Berkeley School of Jewish Literary Studies… Literary Passports is an astonishingly ambitious and successful book. It takes us back to the decades before the establishment of the State of Israel, when Hebrew writing took place in the margins of European modernism.”

“Pinsker’s approach thus challenges the premises of epoch-defining critic Gershon Shaked, who has suggested that Hebrew modernism was a movement quashed by its failure to propagate Zionism through realist fiction… Pinsker’s conceptualization of it as a “transnational modernism” places it in the broader scope of European modernism…Pinsker’s work may be seen as a foundational text in rethinking the development of early twentieth-century Hebrew literary movements.”