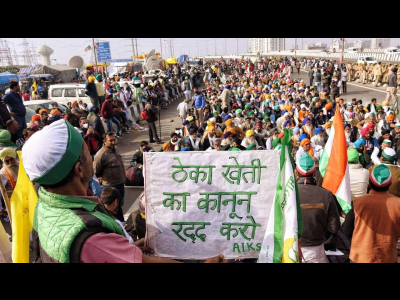 The year 2020 started with the then ongoing Shaheen Bagh movement and culminated with the currently active Kisan andolan—or the farmers’ movement—and the countrywide lockdown in between due to Covid-19. Both the movements are nonviolent and unusually studded with women’s participation in large numbers. The former was scuttled by the Indian government after more than 100 days on the pretext of the lockdown and the latter is being torpedoed by infiltrating saboteurs. Luckily, the movement has survived and entered its 74th  day of continuous peaceful protest on the 5th  of February, 2021. All roads to Delhi are blocked by the protesters at its borders at five points. The government has deployed police and paramilitary forces in addition to heavy barricading via spiked slabs of concrete and barbed wire. Yet the farmers from all over India are flocking for the sit-in (dharna).

The government is deliberately prolonging any decision, hoping that the desperate farmers will get exhausted due to lack of amenities (especially in the harsh winters of Delhi when the lowest temperature touched 1.5 degree Celsius). The westerly winds too brought heavy rains. The farmers were sleeping in the polythene covered tractor-trolleys and others under them. Gradually, living facilities such as tents, water tankers, washing machines, portable toilets, desi (local) geysers were arranged. Langar or community kitchen was already in place from day one even all along the routes to Delhi. The hot food and snacks are available from early morning to 12 PM midnight. Men and women provide voluntary service tirelessly for months together. The donations in cash and kind are reaching from the locals and the diaspora in such volume that its storage has become a problem. The village panchayats of Punjab, Haryana and Uttar Pradesh have arranged to maintain a constant flow of men and material from each village on rotation basis such that the protesters are relieved after a week or ten days.

In due course of time, these protesting sites assumed the form of a fair (mela) hosting not only speeches by the farmers’ leaders and activists but also popular Punjabi singers and composers, theatre persons presenting plays and skits, film shows and painting exhibitions etc. all geared to show the plight of the farmers. Noted poets are singing paeans to the farmers. Kabbadi and wrestling matches too are being organised. Those who visit there wish to be there again, that is how lively it is. The largest gathering of farmers is at the Singhu border on the National Highway-1 that has assumed the status of a pilgrimage centre. Persons belonging to different professions but related to the farming community indirectly wish to be there once. For them it is like a dip in the Ganga river during the Kumbh mela held after 12 years.

The farmers are protesting the repeal of three laws related especially to the marketing of agriculture produce that had been framed without proper procedural discussions and debates at appropriate fora. The farmers’ unions were not consulted. They fear that whatever little means of subsistence they have will be ruined by giving agriculture in the hands of corporate houses. Mind you, in Punjab alone that is primarily an agriculture dependent state the small and marginal farmers are 85 percent of the population. The farmers are rightly apprehensive that the government rushed through these bills and their implementation when the country was under lockdown to favour the Ambani and Adani companies who are now venturing into the food and agriculture sector. The farmer unions in Punjab also damaged the communication towers of Ambani’s Jio Reliance. The Haryana farmers have also threatened similar action if internet shutdown is not revoked.

It is remarkable that a large congregation of many hundred thousand protesting farmers has remained peaceful, except for an aberration on the January 26th by a minuscule number of ruffians allegedly supported by the ruling Bhartiya Janata Party (BJP). The television channels too focused on these incidents of removing barricades than showing even glimpses of the peaceful tractor-rally involving the majority farmers. According to some, there were more than two hundred thousand tractors around Delhi on that day, far beyond the expectations of the leaders. The government framed criminal charges against the union leaders besides jailing 115 farmers.

In the past century, such a long drawn peaceful protest has not happened. The litterateurs in large numbers returned their awards and honours followed by the sports persons of Punjab and Haryana. The decorated soldiers returned their medals in thousands and reached their target of 25,000 medals. The old people nearing a century and tiny toddlers are sitting on dharna. The Supreme Court directed the organisers to send home the elderly, the women and the children but they refused to leave saying: “Pehle Bill wapasi, phir ghar wapasi” that they will return home only after the bills are repealed. All farmers’ are adhering to this slogan unflinchingly. People in Punjab are hoisting the union flags on their houses and vehicles besides stickers like No farmer, No food etc.

The Shaheen Bagh and the farmers’ movement have exposed the nature and character of the Indian state. The façade of liberal democracy with an insulated judiciary, impartial and transparent governance of laws framed in the parliament has been torn asunder in the second term of the BJP rule. What the Bollywood films were showing about the nexus of the political elite, the police and the underworld is manifestly reflected in the functioning of this government casting away any pretensions of secrecy and decency. In the last year only three executive orders were unilaterally implemented – CAA (Citizens Amendment Act)/NRC (National Register of Citizens), removal of Article 370 from Jammu and Kashmir and the farm Bills. All of these invited huge opposition from the affected people. Kashmir was already under lockdown before the Covid-19 pandemic. The Shaheen Bagh protest against the CAA/NRC became an all-India phenomenon. Prime Minister Modi keeps invoking his government’s mantra of sabka vikas, sabka saath, sabka vishwas, that is, everyone’s development through everyone’s support and trust but acts contrarily. All people whom the government professes to benefit are up in arms against it.

The farmers are hell bent on repealing the laws because they know that all institutions of the government including the parliament and the judiciary have lost credibility and legitimacy. There is hardly any opposition in the parliament. Whenever any voice is raised it is hooted down. The Supreme Court too has lost legitimacy. It is believed to look towards the government than the truth and justice. An elderly farmer who lost his grandson during the tractor-rally laments: “We do not expect any justice from the Supreme Court. It is captured by the government but we will fight anyway.” The leader of five judges who raised a voice against the then Chief Justice, got promoted and on retirement occupied a berth in the Rajya Sabha (parliament’s upper house). The government asked this court to intervene in the farmers’ issue which the protesters rejected. The state and its apparatus has lost legitimacy over the last few years as never before. The list is too long to enumerate.

The media as the fourth estate, a pillar of modern democracy, has also fallen in the government’s lap, hence ‘godi’ (lap) media. It propagates and justifies the government’s viewpoint rather than raise a voice against the lies. It is generating fake news in the government’s favour rather than exposing these lies.  It no longer reports the facts so that wrongs done to people are corrected. It has distracted from its major role of modernising a traditional society but concentrates on revenue collection and high TRP. If the government becomes a lying machine then where can one expect truth and justice?

The benefit of the farmers’ movement is that it has laid bare the collusion between the state and the capital, the government and Ambanis and Adanis. Long ago Marx dubbed the modern state as an executive committee of the bourgeoisie to run its affairs but the political elite always denied it and continued to do so. The farmers’ movement with the support of social media has brought it to light openly. It is arousing peoples’ consciousness in this regard.

Under such circumstances when the state institutions have lost legitimacy, what can the protesting farmers do? There is no option for them but fight to the finish following the Sikh principles of doing labour (kirat karo) and sharing its fruit with others (wand chhako) all in the name of God (Naam japo) for everybody’s welfare (sarbat da bhala). They should remain firm in their resolve to protest peacefully like Gandhi’s satyagrahis during the Dandi march. Ultimately, the truth prevails and the truth is with the farmers who do hard labour on ground to make a living. The farmers’ are fighting not only for themselves but for the survival of teeming millions in India who are living on the subsidised ration from the government. Prime minister Modi should show magnanimity and facilitate the repeal of laws for these people. Please note, India ranks 94/107 on the Global Hunger Index in 2020.