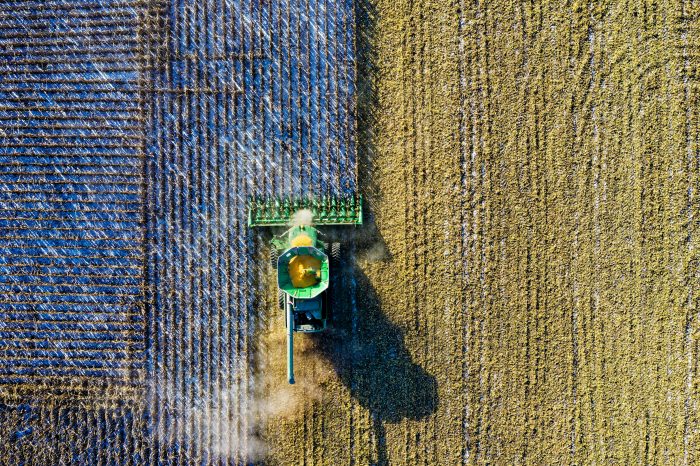 The most recent updates on the University of Michigan’s response to the COVID-19 pandemic can be found here. The Maize and Blue Cupboard remains open, providing food, cookware, and other personal items with increased safety precautions at this time. See here for details.

COVID-19 and the Urgency of Transforming the Food System

The pandemic of 2020 created challenging conditions which some say could result in one of the most significant world transformations since the world wars of the 20th century. It is, as acknowledged by all political persuasions, a catastrophe on multiple fronts, intersecting as it does the key biological issue of how a virus spreads through the human population with the ever more complicated issue of the way goods and services spread through that population. It is an unhappy marriage of epidemiology with economics. The problem of food acquisition, the central problem of existence from Homo erectus to us, will almost certainly be changed as our species emerges from the most dire emergency in a century. Concomitantly, intellectual engagement with this key issue, from the genetics of crops and animals to the distribution of processed foods, will also be greatly modified, or should be. Innovation on this issue should be paramount in our actions as new scholarship emerges from new experiences, some obvious, but many subtle yet important.

The community of scholars, practitioners, and activists associated with the general problem of food acquisition, needs to be encouraged to “think outside the box,” as we engage with the immense problems already being experienced, and, perhaps more importantly, anticipate the problems likely to arise in the near future. Examples of the former already abound. Meat-packing workers in the US, because of the way we have fetishized the need for cheap meat, are forced to live their working lives in a petri dish of viral transmission. The result is not only dramatically increased risk of disease for those workers, but the creation of an effective hot spot for the promulgation of the virus itself, endangering the rest of society. Some small towns in Argentina and Brazil have been unable to engage in the public health necessity of social distancing because of the requirements of the politically influential soybean system to get products to international markets through the docks in those towns. These compelling problems, and many more could be cited, result from decisions collectively (and sometimes unwittingly) made by the world’s human population over past decades about what constitutes a good food system and what constitutes a good economic system to go along with it. The Covid-19 virus is our wakeup call.

To be sure, the food system will change. Our collective job as a species, is to try and intelligently steer that change in a good direction. Our navigation will be complicated. The key problems that existed before the virus attacked, remain – global climate change, potential for nuclear war, threats of world economic collapse, the ongoing immigration crisis, and more.  All of these crises are related to the global food acquisition system, even if sometimes through tortuous interconnections.  Likewise, scholarly engagement with the issue is likely to change, or perhaps should. There are those who engage in sometimes aloof study, those who engage in acquisition or distribution of food, those who actively engage in trying to transform the system – scholars, practitioners, and activists. It is time to invent a new framework in which these diverse sectors intersect.

In our (SFSI, 2018) published analysis “Feeding Prometheus” we noted:

“A global food system that leaves millions food insecure while contributing to obesity, that generates significant collateral environmental degradation, and that compromises the wellbeing of consumers and producers alike challenges the academic community to ask new types of basic research questions and apply novel analytical frameworks for analyzing them. . . [and calls for] new, transdisciplinary, and high-impact research questions that will help re-route the food system toward a path of environmental, social, and economic sustainability.”

The COVID-19 crisis has only heightened the urgency of this call. Meat-packing workers form hubs for the virus, soybean capitalists impede social distancing in port cities so as to maintain their animal feed production line, deforestation to promote industrial farming brings zoonoses into our human community, citizens become more vulnerable to the virus because of a lifetime of eating junk food – the list could be expanded considerably. The problems with the current food acquisition system were not created by the pandemic, but it certainly has brought them to our attention.  It is now time for academic institutions to play a greater role in this most basic of human needs – food.  Now, with the new push to rescue the stock market causing some to ask “how many must die for the Dow?”, the fact that our modern monopolistic capitalist system is the core of the problem is there for all to see, and transforming the associated food system is part of the solution that is now more evident than ever.  It is time for academics, practitioners and activists to get together and call for a Green New Deal for the food system, and academic institutions need to put far more energy into this basic transformation.