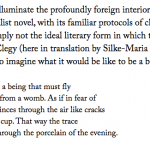 A lyrical translation of Rilke, published in The American Poetry Review in 2000 by Silke-Maria Weineck (Professor of German and Comparative Literature at the University of Michigan) is mentioned in a current article from The New Yorker:

If writers hope to illuminate the profoundly foreign interior lives of animals, it may be that the realist novel, with its familiar protocols of character, narration, and dialogue, is simply not the ideal literary form in which to do so. In his rapturous Eighth Elegy (here in translation by Silke-Maria Weineck), Rainer Maria Rilke tried to imagine what it would be like to be a bat:

how dismayed a being that must fly

and yet stems from a womb. As if in fear of

what it is, it winces through the air like cracks

run through a cup. That way the trace

of bats tears through the porcelain of the evening.

Rilke’s strange, exploratory poem does not attempt to translate the creature’s experience into our own familiar discourse, but works instead, strenuously and tentatively, to find a new grammar and syntax through which to convey it. If Rilke’s elegy cannot tell us what it is in fact like to be a bat, it at least allows us to imagine how our language would need to metamorphose and take wing in order to even attempt to find out.

For the complete article, see “Can Fiction Show Us How Animals Think?”.