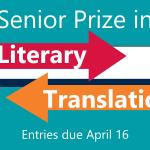 This prize is intended to encourage undergraduate students to develop projects (through previous coursework or on their own initiative) in translating into English a literary text originally written in another language.

Submissions are due by Tuesday, April 16, and will be judged by a team of faculty members in Comparative Literature.

A prize of $500 will be awarded at the end of winter term. The winner or the winners will be invited to read at the department’s end-of-year reception on Friday, May 3. 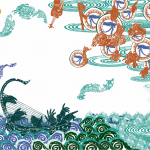 The newest issue of Absinthe: World Literature in Translation is here! Volume 24, World Hellenisms, is now available for order!

World Hellenisms presents a selection of newly translated prose and poetry by vital voices from around the globe, including Mata Kastrisiou, Yiorgos Chouliaras, Chaim Shoshkes, Maryam Hooleh, Ersi Sotiropoulos, Elena Polygeni, Tarek Emam, Vinicio Capossela, Thomas Ioannou, and Iana Boukova. These wide-ranging texts represent reimaginings of Ancient Greek myth, explorations into the life of Cavafy, and reflections upon contemporary political and economic crises, gathered here with the aim of opening up and expanding our definitions of “Hellenism.” 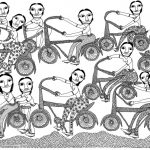 Comparative Literature Professor Christi Merrill and Professor Laura Brueck (Northwestern University) edited a special issue of Dalit writings from Hindi into English for the October issue of Words Without Borders! The translations include stories on “a traveler who finds himself checked into a ghost story to an ambitious schoolgirl facing her relatives’ resentment, in settings that range from a corporate office to a rural village.”

Words Without Borders promotes the accessibility of international literature through translation and publication to further intercultural understanding. The Dalit community’s Hindi writings use the national language to challenge the caste system and untouchability. Dr. Merrill’s careful work as a translator and editor of the special issue makes available to English readers “some of the most meaningful, socially engaged narrative voices in India today” (Introduction).

Congratulations to Dr. Christi Merrill! The October issue of Words Without Borders can be found here. 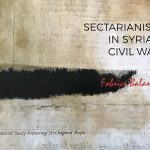 Marine Barjol developed her capstone project for the minor in translation studies out of an internship for political science degree. After arriving in Washington DC for the Michigan in Washington program in fall 2016, Marine was offered an internship opportunity working with a visiting fellow from France at the The Washington Institute for Near East Policy. The fellow, Fabrice Balanche, was working on a book about the Syrian civil war, and one of Marine’s assignments was helping translate the French manuscript into English. The project was a challenging yet rewarding experience. Not only did Marine gain practical translation skills, she also acquired professional experience working with and author on a publishing project. The translation took seven months for Marine to complete, and the end result, Sectarianism in Syria’s Civil War by Fabrice Balanche, was published in 2018. 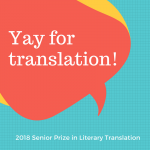 The Department of Comparative Literature is pleased to announce that Trevor Krayer and Jess Liu were selected as the winners of the 2018 Senior Prize in Literary Translation.

Trevor Krayer (BA, International Studies and Romance Languages and Literatures) translated an excerpt from the novel Terra Fresca by João Leal from Portuguese into English. Trevor worked to faithfully convey the author’s original sentence structure in his translation, thus keeping the tone of the scene and narration style in line with the original text. He was also careful in his portrayal of the characters, using their dialog to indicate the differences in social classes and the relationships between the characters. The prize committee particularly admired the graceful fluidity of his English prose. al Science) translated the short story Endless August by Anni Baobei from Chinese into English. Jess discovered the writing of Anni Baobei in her early teens and it sparked her passion for fiction and for writing. The Senior Prize in Literary Translation was the perfect opportunity for her to revisit this text. Over the years, Jess had translated stories between Chinese and English, and she applied these skills to her translation of the short story Endless August by Anni Baobei. Her recent reading of the story—which takes place during a time of change in 1990s China—was particularly affected by her studies in political science and international studies, adding a richness to the story that eluded her at age thirteen.

Congratulations, Trevor and Jess! And thank you to everyone who submitted a translation to this year’s contest. Look for excerpts of their translations in the forthcoming issue of Canon Translation Review. 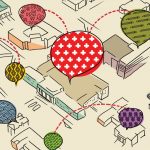 Anjali Alangaden grew up in a family of polyglots, sparking her interest in language and translation, eventually leading her to a linguistics major and a translation studies minor. Once she started paying attention to language on campus, she began to notice something: “The more I looked, the more I saw translation at work in almost every imaginable context. I was fascinated by the translation spectrum I began to see emerging.” For her capstone project in Translation Studies, Anjali worked as an intern for Absinthe (journal of world literatures in translation, published by the Department of Comparative Literature). She also conducted a series of interviews of people working in translation at the university “in an effort to explore the sides of translation that are so often overlooked.” She was interviewed for the Spring 2018 issue of LSA Magazine about her translation project.

You can read Anjali’s interviews and reflections about translation across campus on the Translation @ Michigan blog, and the LSA Magazine article can be found on the LSA website. We’re very proud to have Anjali as the spokesperson for translation at Michigan. 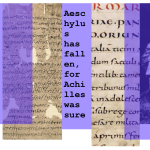 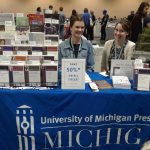 On Wednesday, March 7th, fellow Absinthe editor Genta Nishku and I hopped on a plane to Tampa, Florida for our first ever AWP (Association of Writers & Writing Programs) conference. We were greeted by a perfect 65º day, though not everyone agreed it was warm—locals blamed us for bringing the cold front with us.

AWP is the MLA of the writing world, and so I was prepared for, well, crowds of people, the volleying of loud voices as people spotted one another from far off, and event after event of seemingly imperdible events. (By the way, it felt good to speak so much Spanish in Tampa. Love you sometimes, am-er-ic-a to the north). There’s a lot of joy at AWP, which is something I appreciate, especially after having been to an MLA conference (ALTA has a similar feel). And I was lucky to have Genta as a co-conspirator, and to know that many of my friends—translators, writers, micro-publishers—would be in attendance, too. There was no competition, no job interviews, no despair, and it was the kind of literary vacation I needed right now. It made me feel like translating, and that’s something I’m not always feeling up to these days.

After settling in, we made our way to the convention center to meet up with Kate Beaton—whom I met in undergrad—from the UofM Press. We carved out a small spot for Absinthe and admired the rows and rows of publishing projects at the book fair. It’s wild, really, to be confronted with all of those contemporary books; it’s even wilder that I managed to escape having only bought three of them (all in translation, of course). Those discounts are brutal, y’all. People loved our postcard of the medieval Armenian alphabet imagined as a kind of bestiary and some man even took one and said the letters would make for a good tattoo. Maybe he’ll subscribe, too . . .

While we weren’t with Kate, we were networking, although networking isn’t the right word for what we do at all. It’s community-building, it’s a support network, it’s a fan club. Most of the people I admire are in the same “situation” as I am—translators who are lodged in the in-between. They’re aren’t many jobs in the translation world—and there are even fewer well-paying jobs, especially for those who aren’t “stars” of their language—so many of us work in other fields and cobble together what we can to get by. Some—very few—get PhDs and translate in the mean-while of professing, but that’s a long shot, too, these days. It’s a real problem in our industry (literary translation & academia), and I’m inspired by the people and organizations that are trying to change things. I aspire to be one of them. All of this is also to say that I was excited to not only rep Absinthe and spread the good word, but that I also had the chance to show off some of my own work as a book designer/artist with an interest in translation & labor. Last week I completed my first folio of a trilingual folio called Co Co Co U by Luz Pichel, Ángela Segovia, and Neil Anderson. Here’s a picture of my corner at the ALTA’s table (American Literary Translators Association). The people at ALTA (Lissie and Rachael) are phenomenal and I had such a good time talking about how we can advocate for not just translation, but translators. That’s a crucial difference y’all, and one that needs to be taken up over and over again in the years to come.

I spent my last night at a special reading featuring my fav poet, Ada Limón, with Cristy Hall, whom I’m co-editing Absinthe’s upcoming issue on Catalan Women Writers. We had time to work out some of our ideas earlier that evening, and let’s just say we’re excited to show you what we have in store, including that our issue will feature illustrations from the wonderful Elisa Munsó of El Diluvio Universal (Barcelona). Until then, chase that joy, y’all. 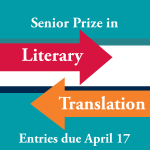 This prize is intended to encourage undergraduate students to develop projects (through previous coursework or on their own initiative) in translating into English a literary text originally written in another language.

Submissions are due on the last day of classes, and will be judged by a team of faculty members in Comparative Literature.

A prize of $500 will be awarded at the end of winter term. The winner or the winners  will be invited to read at the department’s end-of-year  reception. 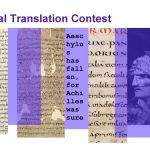 Contexts for Classics at the University of Michigan is pleased to announce the 17th annual Classical Translations Contest.

1. Please submit your work anonymously in the following format: FOUR hard copies of your English translation (along with the original text) and ONE separate cover page (listing the title and author of the text you translated, your name and email address, and your undergraduate major or graduate program).

3. All submissions will be judged anonymously by a panel of faculty members from Classics, Comparative Literature, English, and related departments.

4. Students affiliated with any UM department are eligible.

5. All work should consist of original translations/interpretations of works from Ancient Greek, Modern Greek, or Latin.

8. In each category (undergraduate and graduate), the prizes will be $100 each.

9. Winners will be invited to read from their translation at the annual Classics Department Awards Ceremony on April 17, 2018.