A molecular motor flips end over end to cover 300 nanometres a minute. 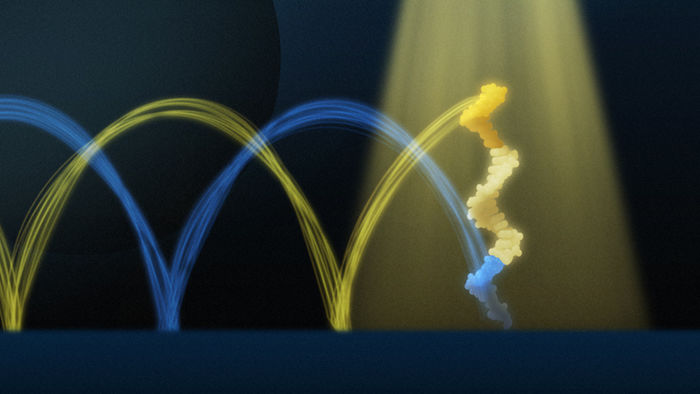 A short segment of DNA anchors one end of itself and then flings the other end forward. Credit: Zhuoru Li

An acrobatic DNA segment that cartwheels across a surface is one of the fastest ‘walking’ molecules yet designed.

Researchers seeking to design nanorobots have synthesized DNA molecules that move autonomously. But most of these ‘walkers’ require several minutes to take a single step.

Nils Walter at the University of Michigan in Ann Arbor and his colleagues built a DNA walker that moves along a grid of ‘footholds’, which are made of complementary DNA building blocks called nucleotides. Each end of the walker has sequences of nucleotides that it uses to attach itself to the grid. Then it flips end over end to attach itself to another foothold.

The molecule can flip as many as 43 times per minute, covering a distance of 300 nanometres. This is an order of magnitude faster than the pace of other types of DNA walker.