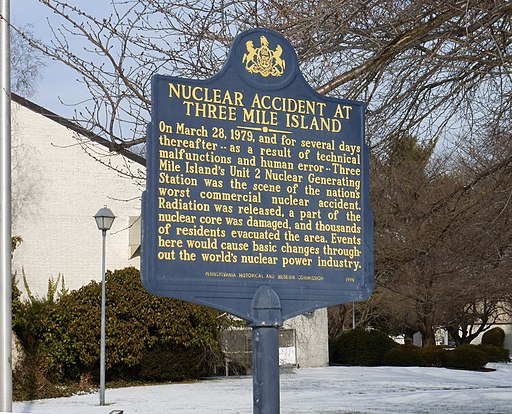 by Lynn Carpenter, lecturer and advisor for the University of Michigan Department of Ecology and Evolutionary Biology

When I was young, my father was a history teacher. I will admit, I did NOT share his love of history back in the day.  He used to tell me “Those who fail to learn from history are doomed to repeat it.” I learned long ago that this was a famous quote by Winston Churchill, but back in the day I was young, and well, didn’t really care to learn from history.

As I grew older, I have come to appreciate history and I have learned why it is CRUCIAL for our own well-being as a species. My current hobbies include traveling to the Love Canal, Three Mile Island, and Centralia, Pennsylvania (on my ‘to do list’ are Chernobyl, the nuclear testing sites in Nevada, and Chalk River, Canada). Most people take their spouses to tropical destinations, romantic getaways and beautiful beaches. I drag my husband to the biggest environmental disasters of human history. I have said it before, and I will say it again, I have a wonderful and very patient husband.

You might ask yourself, why do we visit these places? Well, first I am genuinely fascinated at how nature seems to bounce back from our stupid environmental mistakes. I remember long ago when Chernobyl was predicted to become a deserted wasteland. From a nature perspective, it has become just the opposite – so much so that it was recently declared a wildlife refuge by the Ukrainian government.

However, I am also very often appalled at how little our students know of environmental disasters of the past, particularly of the areas I just mentioned. In class I speak very often of the Love Canal, Three Mile Island and Chalk River, and as we talk about this information, many of my students say they have never even heard of these places, much less what happened there. This scares the heck out of me. I don’t know when the history of the environment was eliminated or overlooked from high school curriculum, but you ask our students about it these days and they don’t seem to think about it much less ask about it. They just seem to assume everything today is “safe.”

You might wonder why does this upset me so? Well, as we look to eliminating climate change (of which I am a big fan, don’t get me wrong), we need to start looking for alternative sources of power. Without getting political, the Biden administration has cautiously given the green light for nuclear power. The Gates Foundation has also sunk a large number of monetary resources into this idea. While I like the concept of a zero-emission power source, I am NOT convinced nuclear is a safe way to go. “Why” you ask?

Because like it or not, we almost suffered our own version of Chernobyl back in 1979 at Three Mile Island in Pennsylvania. In fact, from what I have read, we were only about 30 minutes away from a complete structure failure and total meltdown. If you don’t remember the details, March 28, 1979 TMI Reactor 2 was undergoing a routine power test. Due to both human error and equipment malfunction, the core reactor of Unit 2 underwent a partial meltdown. Operators were unaware that the core was not under the much needed water coolant, and they lowered the water levels further, which led the chain reaction to overheat and the reactor to gain a large buildup of nuclear gasses that were ultimately released.

What happened next is under debate, and it very much depends on who you talk to. Those who worked for Metropolitan Edison (the plant) say that no more than background levels of radiation were released into the atmosphere. However, those who lived close to the reactor reported that they started to suffer symptoms of radiation poisoning. This includes vomiting, fatigue, metallic taste in their mouth, etc.  These reports were SUPPOSEDLY later discounted, but I would like to know who discounted them and how? These people went through what they went through, and later research would reveal that there was an increase in cancer for those who were exposed to the radioactive plume. In fact, a federal court was so sure that there was human error that they awarded 20 million dollars in 1981 to over 15,000 claims that had been produced by people who lived in the area in the aftermath of the disaster. This alone tells us that something went horribly wrong, and we need to think twice before we proclaim “Nuclear is the way to go.”

Like it or not, history is history, and much of it is ugly. The people of TMI lost loved ones (I have spoken to many survivors), or they themselves suffered health effects. Now, I know that many people say this would never happen today. My husband has a cousin that works at Fermi 2 who swears that his job and the plant are both totally safe, BUT truth be told he has the attitude of the atomic “fraternity.”  (See nothing tell nothing). So given the fact that I am not into conspiracy theories, let’s discuss a recent event that happened to me just LAST WEEK that scares the heck out of me.

Earlier this summer I signed up for a floor hockey league (no ice, I’m too old and fat for that). However, this was through an App, and random people sign up and show up to play. Who plays can change week to week, but last week I met a new player and we started chatting. It turns out this new hockey guy (we shall call him ‘Jeff’) works at Fermi 2. Jeff is just fresh out of the military (I am grateful to him for serving our country) and Jeff is in great shape. He is in his late 20s, and solid muscle. In fact, he should have run circles around me and my fat out-of-shape almost 50-year-old body.

However, as we started playing, Jeff seemed tired almost immediately. Then, very abruptly, Jeff rushed off of the field and vomited like I had never seen before. In fact, he vomited all over the parking lot (at least 5 times, if not more). He then collapsed on the grass next to our field. I was mortified, and I went over to check on him. He said he was fine, just ‘out of shape’ (Baloney). As we chatted, the conversation wandered, and he mentioned casually that the previous day he had been at work and was asked to help clean up a radioactive water spill. Interestingly, the spill was so bad that Jeff and his fellow workers became contaminated, so much so that he had to throw ALL of their clothing away (rather than being upset at the radiation exposure BTW, Jeff actually seemed most upset at throwing his underwear away – but ok).

At first, I didn’t think much of this. Then, as I was chatting with my husband later after hockey was long over, we both realized – vomiting so severely is a FIRST sign of radiation poisoning (along with fatigue, etc.)!  I have not had a chance to talk to Jeff since this event, and my husband says I should mind my own business. However, I would bet dollars to doughnuts that he also developed a metallic taste in his mouth, along with a skin rash and the other symptoms. Despite my husband’s advice, I am DYING to ask him how he feels (to be continued).

The moral of this story and the purpose of this blog is that I would like us (as a society) to think twice before diving into nuclear power. Our history shows that whenever humans deal with a dangerous substance such as nuclear anything (power, weapons, etc.) things go horribly wrong, one way or another. Just ask the people of TMI.  They have an association called the TMIA (Three Mile Island Association – check out their website, they are awesome) where they meet once a month to try and help remind people of what happened to them, and that we need to think twice about nuclear power.  Did I mention that they have been doing this since 1979?  Talk about conviction!

Let’s be honest, what are the odds that I, an unknown and unimportant person, happened to witness the ONE time that Fermi 2, a running nuclear power plant, happened to release radioactive water in such quantities that it made the workers sick? Is this truly the only time this has or ever will happen? And while I’m at it, exactly where did that radioactive wastewater go anyway? Is it in our drinking water now? Did it get contained appropriately? Why do we not know this when we live so close to this plant? I can’t find anything on the internet about it anywhere. I am dying to call the plant, but I am sure I won’t be told and that would likely get Jeff fired. The moral of this story is that before we start building and investing in more nuclear power plants, we need to learn from our history as a country and focus on making safer alternatives more affordable (wind or solar anybody?). After all, unlike a nuclear power plant, if a wind turbine fails or a solar panel goes bad, you don’t have to displace tens of thousands of humans from a 100km exclusion zone like they did at Chernobyl.

Caption: A sign in Middletown, Pennsylvania dedicated in 1999 describing the Three Mile Island accident, the evacuation of the residents in the area, and the impacts to the nuclear power industry.