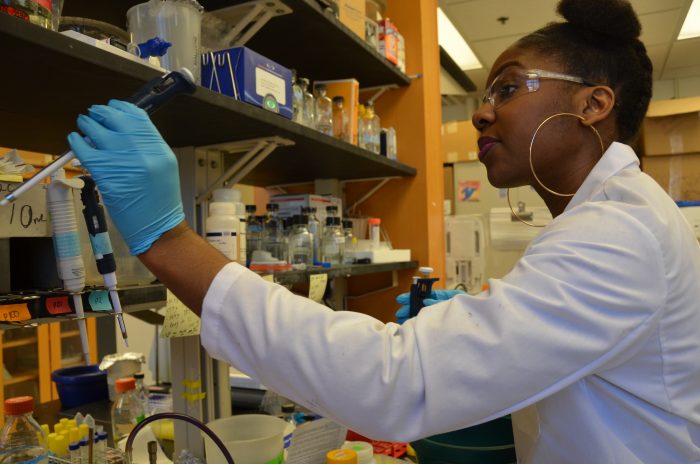 I am a Pathways Master’s student in the Department of Molecular, Cellular, and Developmental Biology. In my lab we study biofilm formation in E. coli. Biofilms are made of individual cells that stick to one another and form a complex structure that is difficult to break apart. These communities can be up to 1000x more resistant to antibiotic treatment. My love for science stems from my mother, a college professor, who earned her Ph.D. in organic chemistry from the Georgia Institute of Technology. I watched her use her education to aid her community in Ukpor, a village in Anambra State, Nigeria. She worked tirelessly to provide access to clean and safe water for everybody in our village. She was only able to do so because she received a STEM education at Georgia Tech, after the institution finally desegregated in 1961.

If not for Historically Black Colleges and Universities, during a time where racist policies prevented black students from gaining access to higher education, people like Charles Richard Drew would not have had the resources to revolutionize the process of blood storage. His work ultimately led to the first large-scale blood bank in America that saved hundreds of thousands of lives during World War II.

As I prepared for the March for Science, I felt it was critical to address the need for investing in diversity, equity, and inclusion (DEI), as well as the challenges of being an underrepresented minority (URM) in STEM.

During my third semester as a Pathways Master’s student, I was a graduate student instructor for intro to biochemistry. I had a young black woman share with me that I was the first black face she had seen teaching a senior-level STEM course, an experience I am all too familiar with. I have two STEM degrees, four years’ research experience as a structural biochemist and a molecular biologist, and have had only two black professors. In that moment I was honored and excited to show her that there was space for her in this field because I existed.

I am passionate about serving URMs in STEM. I do this through serving on the African Studies Center executive board – whose mission is to foster research collaborations between the University of Michigan and countries in Africa, and as co-president of Females Excelling More in Math, Engineering, and the Sciences (FEMMES), where twice a year, we bring over 200 girls from underserved and underrepresented communities for a day of science hosted by women faculty, post-docs, and graduate students and undergraduate students.

While I am a strong advocate for DEI, it is not my job to justify my presence here. There are a plethora of studies that show the socioeconomic factors that result in a lack of diversity in the sciences. If we can parse the literature to support our research in the lab, we can do the same for topics about the need for diversity.

Initially, I was apprehensive to share my message, even more so when I looked out into the crowd and did not see many faces that looked like me. Furthermore, this was my first speech which also contributed to my anxiety. Per the advice of a close friend, I shifted my attention from what people would think of me to my motivation for sharing a message that was important to me and to so many others affected by the lack of diversity in STEM. Since speaking at the March for Science, I’ve received an incredible amount of support. People contacted me to share how inspired they were by my speech, while others solicited my advice for navigating STEM spaces as an URM. It’s an amazing feeling to not only be encouraged by URMs, but by non-marginalized groups as well. The March for Science reminded me of why I came to the University of Michigan; it is truly a special place, and one of the few spaces where I have felt welcomed, supported, and valued as a black woman in STEM. In hindsight I’m happy that I accepted the invitation to speak and I’m grateful to the organizers for reflecting on the importance of representation at the March for Science.

I March for Science – because it’s my passion and my way to help others – but also to represent the underrepresented. As a prominent Chicago based rapper Lupe Fiasco once said, “It’s never cyclops, it’s never I alone.” As I work towards my dreams, my goal is to bring 10 people up with me each step of the way. My ability to be successful in this space is because of those who paved the way before me. We have all benefited from the research done by URMs in STEM and our research programs would not be what they are today without those contributions. For that, I am proud, and will continue to pave for those who will come after me.

Chiamaka Ukachukwu is a Nigerian-American born and raised in New Jersey. She recently defended her Master’s thesis through the Pathways Program in the Department of Molecular, Cellular, and Developmental Biology at the University of Michigan – Ann Arbor. Under the guidance of Dr. Matthew Chapman she studied regulation of biofilm formation in E. coli to better understand mechanisms of antibiotic resistance. During her time at Michigan she served as Co-President of Females Excelling More in Math Engineering and the Sciences (FEMMES), a group focused on recruiting young girls from underrepresented and underserved communities into STEM fields. She also served on the African Studies Center executive board as a student liaison to foster research collaborations between the University of Michigan and Africa. She is passionate about diversifying STEM fields and using science to benefit society.