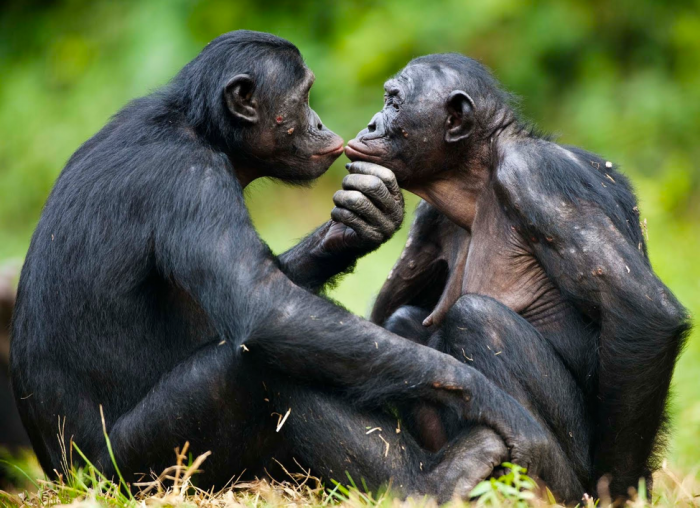 For Week 9, I dove into a folder of papers titled “Miscellaneous.” I assumed I would pick a subtopic and focus on a few related papers, like social interactions or genitalia. I read abstracts about hyenas, snakes, chimps, and anglerfish. I learned about genitalia of more shapes and sizes than most people would ever imagine, bizarre social rituals, and looked at photos of fish that were the stuff of nightmares.

Much of our discussion about sex and gender has come down to a discussion of unusual or unexpected behaviors and identities. As members of human society, we often try to classify traits as “normal” or “weird.” As biologists, we extend this to classifying whether a behavior is adaptive or just a byproduct or random occurrence. But the more you delve into the topic of sex and gender in nature, the harder it is to categorize. Sex advice columnist Dan Savage frequently gets questions from people who want to know “am I normal?” His answer: “No! You’re not normal, but so what? . . . Everyone has something that disqualifies them from normal.”1 He says this about humans—but it is perhaps even more true when you broaden the scale to the entirety of living organisms2.There is something really amazing about learning about all of the different and varied sexual and gendered behaviors in the natural world. Are they weird? Sure. But are they normal? Definitely.

In the end of my search, I was so excited about so many different cool and wacky things I’d read that I picked three papers on three totally different topics. The papers I chose were noteworthy for being so weird–and so normal–at the exact same time. Here’s a sampling of what I learned and what we discussed.

For materials and information on teaching sex- and gender-related topics in biology see www.projectbiodiversify.org/sex  Reposted with permission and with the caveat that these posts are several years old and Project Biodiversify and other efforts like Gender Inclusive Biology and other LBGTQIA2+ people are always working to improve and update.