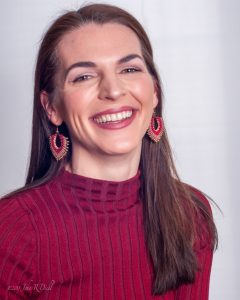 Dr. Emily Wilcox is a tenured Associate Professor of Chinese Studies and Director of the Chinese Studies Program at William & Mary. She was a ’21 Wilson China Fellow at the Woodrow Wilson International Center for Scholars and is currently a ’21-23 Public Intellectuals Program Fellow of the National Committee on US-China Relations. In Fall 2021, she served as Interim Chair of the Department of Modern Languages and Literatures at William & Mary.

Dr. Wilcox is a leading scholar of 20th and 21st-century Chinese dance and performance studies, with broader specializations in PRC history, Chinese gender and ethnic minority studies, Sinophone and Chinese diaspora studies, and Inter-Asia cultural studies. Dr. Wilcox received major fellowships from the American Council of Learned Societies and the Social Science Research Council for her first book, Revolutionary Bodies: Chinese Dance and the Socialist Legacy, published by the University of California Press in 2018. Revolutionary Bodies won the Dance Studies Association’s 2019 de la Torre Bueno Prize®  and is the first English-language, primary source-based history of dance in the People’s Republic of China. Revolutionary Bodies is available Open Access through the support of a University of Michigan TOME grant. Interested readers can listen to a podcast about the book in English or view book talks by Wilcox delivered in English or Chinese. A Chinese translation of Revolutionary Bodies is under contract with Fudan University Press for release in 2022.

Dr. Wilcox’s second book, Corporeal Politics: Dancing East Asia, co-edited with Dr. Katherine Mezur, was published by the University of Michigan Press in 2020. Corporeal Politics is the first scholarly book in English to examine diverse styles of dance and their relationship to politics across the East Asia region, including mainland China, Hong Kong, Japan, North and South Korea, and Taiwan. Since 2014, Dr. Wilcox has collaborated with U-M Chinese Studies Librarian Dr. Liangyu Fu to create the University of Michigan Asia Library Chinese Dance special collection, now the largest collection of primary sources on Chinese dance history outside China. As part of this project, Wilcox and Fu co-created the Pioneers of Chinese Dance digital photograph archive and the original exhibition “Chinese Dance: National Movements in a Revolutionary Age, 1945-1965,” both launched in 2017. The collection and exhibit are the subject of a co-authored bilingual Open Access book project currently under contract with Maize Books.

In addition to the above projects, Dr. Wilcox has published twenty-seven scholarly journal articles and book chapters, in both English and Chinese, in venues such as The Journal of Asian Studies, positions: asia critique, China Perspectives, Inter-Asia Cultural Studies, Asian Theatre Journal, TDR: the Drama Review, Journal of the Beijing Dance Academy, Journal of the Society for Dance Documentation and History, Wudao pinglun (Dance Review), and numerous edited collections. Dr. Wilcox’s forthcoming book Teaching Film from the People’s Republic of China, co-edited with Dr. Zhuoyi Wang and Dr. Hongmei Yu, is under contract with the MLA Options for Teaching series. Wilcox is also completing the English translation of an academic book in Chinese on contemporary Chinese folk and ethnic dance choreography, and her special issue “Inter-Asia in Motion: Dance as Method,” co-edited with Dr. Soo Ryon Yoon, is forthcoming in the journal Inter-Asia Cultural Studies. Dr. Wilcox is working on a new single-authored monograph tentatively titled Performing Solidarities: Revolutionary Internationalism on the Chinese Dance Stage, 1949-1976 that examines how Chinese audiences encountered the world outside China through dance during the Cold War.

Dr. Wilcox received her undergraduate degree from Harvard University in 2003, her MPhil from the University of Cambridge in 2004, and her PhD from the University of California, Berkeley in 2011. She was a Blakemore Freeman Fellow at the Inter-University Program for Chinese Language Study at Tsinghua University in 2007-2008, a visiting Fulbright scholar at the Beijing Dance Academy in 2008-2009, and a non-residential postdoctoral research fellow at the Shanghai Theatre Academy in 2011-2013. Before she joined the University of Michigan faculty as an assistant professor in the fall of 2013, Wilcox was Adjunct Instructor of Modern Chinese Studies at the University of California, Davis in 2011 and a Visiting Assistant Professor of Modern Chinese Studies at the College of William & Mary in 2011-2013. Wilcox served as President of the Association for Asian Performance in 2015-2017 and Board Member of the Society for Dance History Scholars in 2014-2016. She is currently a member of the Board of Directors of the Dance Studies Association and co-editor of the new book series “Dance in the 21st Century” with Bloomsbury. She also serves on editorial boards of dance journals and book series in China and South Korea. Actively engaged in dance practice, curation, and exchange with Chinese-language arts and academic communities, Dr. Wilcox regularly lectures in Chinese and produces international events involving artists and scholars from China and the broader Sinophone world.

In 2019, Dr. Wilcox received the Class of 1923 Memorial Teaching Award for outstanding teaching of undergraduates at the University of Michigan. She teaches courses on modern Chinese studies, comparative Asian studies, and Asian performance studies. In addition to her undergraduate students at William & Mary, Dr. Wilcox continues to advise doctoral students in the U-M PhD in Asian Languages and Cultures and has served as an external member on PhD committees at UCLA, the University of Maryland, The Ohio State University, Temple University, Texas Women’s University, and the National University of Singapore. As a first generation college graduate, Dr. Wilcox enjoys working with students of diverse backgrounds and is committed to overcoming barriers to higher education for all students. Syllabi for Dr. Wilcox’s past and current courses and a list of past and current advisees can be found here. If you are interested in applying to work with Dr. Wilcox, please email her directly at eewilcox@umich.edu or eewilcox@wm.edu for more information.