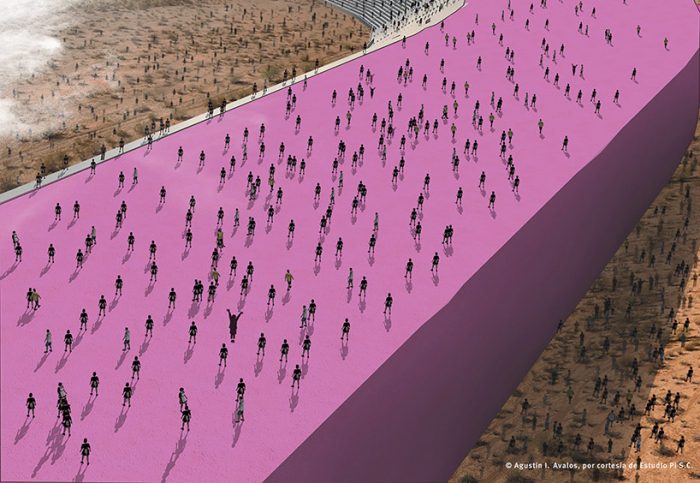 By Anita Gonzalez, Professor of Theatre and Drama
University of Michigan at Ann Arbor

Are we building a wall?

My friends and associates wonder what will be accomplished by cordoning off good will between us. The xenophobic anxiety of our current administration and its electorate, stands in stark opposition to a lived history of collaboration. One third of our nation was once Mexican territory.

My research and scholarly interests focus on Mexico, a country steeped in rich theatrical traditions and contemporary art practices. For the past forty years, I have traveled back and forth across the border, working with artists and scholars to capture and create works about cultural communities of the Americas.

On both sides of the border, fellow humanists respond to experiences of modernity, interracial mixing, industrialization and migration. I greatly value the richness of the cultural exchanges and shared scholarly practices that cross national boundaries. My colleagues and I share similar North American histories of settlement and conquest, nation building and urbanization.

Why are we immersed in promulgating alternative histories that deny our cultural similarities?

The perversity of building a wall is highlighted in several new art projects.

On the southern side of the border, the Guadalajara architectural firm e314 has designed a speculative wall based upon the colorful pastel wall motifs of the Mexican artist Luis Barragan.¹ Like Barragan’s work, the prospective wall punctuates the landscape and makes a political statement; these architects write: “we believe that this project will allow the general public to literally imagine the gorgeous monstrosity proposed by Mr. Trump.” Their thick and expansive long pink wall, crossing a variety of imaginary terrains, is also a prison, capable of housing the thousands of deported immigrants who are part of the new anti-immigrant initiative². At another public site along the border itself, artists are constructing mini-walls as public statements of protest. These populist collages, created by local residents, highlight lost commerce and illustrate agricultural opportunities which would be curtailed by the construction of Trump’s wall.³

Even as these temporary structures point to Mexico’s “anti- wall” sentiment, the lucrative promise of the “wall” project also attracts Mexican businessmen and entrepreneurs. Over 600 architectural firms and manufacturing companies have entered bids in the hope that they too may profit from venture. While the Mexican company Cemex seems ideally positioned to be the primary provider, Cemex President, Emilio Zambrano publicly stated on March 30 that his company will not directly participate in the project. Perhaps this is a response to the March 27 pronouncement by the Mexican Archdiocese that those who participate in the project of “building the wall” are traitors. Still, the potential for work lures entrepreneurs from both nations4.

Tensions over the wall and its relation to nationalist politics are explored through a different lens in a new theatrical work by playwright Robert Schenkkan.  Pulitzer Prize-winning Schenkkan, is the author of both the play and film All The Way5. Frustrated by the news of the pending wall, Schenkkan wrote Building the Wall in seven days. The 90-minute futuristic play,currently in production at six United States theaters, depicts the rise of private prisons where an overflowing population of incarcerated immigrants could lead to a “final solution.” The play,structured as an interview between a prison guard and an investigative reporter, demonstrates what can happen as an individual becomes more and more complicit in disciplining incarcerated bodies. By the horrific end of the play, we learn how the protagonist has efficiently disposed of immigrant bodies.

Let’s hope that this dark imagining of what could happen as a consequence of Trump’s ambition to build a wall and to separate friendly nations, is merely a fantasy6.