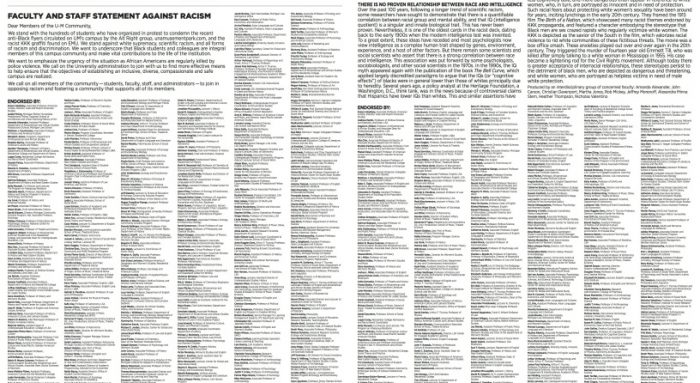 This new blog is rooted in a particular time and place and emerged from a distinctive set of circumstances. In the fall 2016, the University of Michigan unveiled a five-year strategic plan to increase Diversity, Equity and Inclusion on campus. During the same semester, racist flyers were posted across campus that made erroneous and discriminatory claims about the nature of human difference. I have argued elsewhere (“When the Alt-Right Hits Campus,” Against The Current Jan-Feb, 2017) that these two events are deeply related: by promising to invest over $85 million dollars toward programs to promote access and equality, diversity and inclusion the university transformed itself into a target and a lightning rod. This inaugural LearnSpeakAct post draws on key insights from that longer article, and seeks to provide some context for the initial impetus to develop and now launch this blog.

The anonymous postings littering the Ann Arbor campus in late September and scuttling all hopes of a smooth DEI plan rollout were white supremacist, anti-Black and Islamophobic. These warned white women about the “dangers” of dating Black men;questioned the IQ of African Americans; depicted Muslims as violent and bloodthirsty;trafficked in misogyny; taunted immigrants and Jews; and called on white Americans to reclaim their heritage and affirm their “superior” identity as “Euro-Americans.” They were shocking and appalling and the campus community struggled to respond.

Members of the university’s administration at various levels, especially the president and provost and deans, issued responses, condemning the postings and calling for respect and dialogue. Students, both undergraduate and graduate, immediately began to protest, insisting that the administration’s response was inadequate at best. Balancing the goals of an inclusive campus where all students have the degree of safety necessary to purse their studies and the confidence to fully participate in its rich social and intellectual life, with the equally necessary defense of free speech and expression, made for a tumultuous brew. This will surely remain one of the great challenges of campus life and politics in the 21st century.

As pronouncements and protests were swiftly becoming part of a new normal, there was a growing sense that the faculty had been largely left out of exchanges dominated by “The Students” and “The Administration.” Indeed, across the span of these difficult weeks on campus the faculty sought places to stand and productive ways to respond. Hundreds answered the call of then Provost Martha Pollack for a show of solidarity on the Diag one afternoon in October and hundreds more signed two faculty-generated statements.  The first collectively drafted statement sought to provide historical context for the “scientific racism” and white supremacy of the posters. The second, “Faculty and Staff Statement Against Racism” condemned the posters as well as racist graffiti on the campus of Eastern Michigan University, underscored support for Black students and colleagues, and called for concerted efforts to establish “an inclusive, diverse, compassionate and safe campus” for those who were targeted.

Both statements circulated for days on relatively open – too open, as it turned out –Google platforms; both provided a sense of solidarity in allowing people to sign and watch others sign simultaneously; both were vulnerable, therefore, to attack. They were erased on October 2. Their texts were replaced with the words: “ALL OF THE COMMUNISTS WILL HANG ON THE DAY OF THE ROPE,” a line from the white supremacist novel, The Turner Diaries. While the culprits were never identified, the two statements were restored and reprinted in the pages of the Michigan Daily with the original signatures. Faculty and staff continued to sign as the statements were moved on to the LSA website where they still reside: myumi.ch/lsadei

In the aftermath of the presidential election of November 8, tensions rose. There continued to be hateful graffiti and more racist posters, and we struggled, as have other colleges and universities across the country, to navigate the shifting terrain of free speech and ideological diversity, inclusion and the need to feel safe and respected, hate speech,“fighting words,” and academic freedom. At the same time, we also have seen numerous spontaneous affirmations of our community as well as sustained, deliberate, grassroots and institutional actions to support wide-ranging and respectful conversations about salient and sometimes controversial issues on our campus. Post-election forums sponsored by the Department of History and by the Dean’s Office gave rise to what has become the LSA Democracy in Action Fund to support members of the student body, faculty and staff engaging in efforts to promote genuine democratic engagement.

This blog grows out a similar sensibility and commitment and specifically draws on our university’s extensive reservoirs of knowledge and expertise. As a tense fall turned into an uneasy winter several colleagues and I began to take the possibility of this blog space seriously, to organize, establish an editorial policy and a board, to solicit contributions and, finally, to officially launch. Their dedication to this project has been inspiring. I continue to believe that our faculty and graduate students are uniquely situated to assist the wider university community in this important endeavor. And I continue to believe that this is especially true of my colleagues in the liberal arts and sciences. As we write in the“About” section of this blog:

“LearnSpeakAct is a collaborative space for U-M faculty and graduate students to interpret, historicize, explain, and discuss our current moment. Using the tools of Liberal Arts scholarship, this blog asks members of the U-M community to analyze tensions that divide our campus, nation, and world.  Drawing on the expertise of scholars working in a range of fields, we mobilize an intellectual community committed to the creation of more diverse and inclusive learning environments. What these terms mean, and how to achieve the goals they represent are sites of debate. Hence this blog is also an exercise in academic freedom and reflects our commitment to the democratic exchange of knowledge.”

I hope you will join us in the months and years to come as we look back to the events of fall 2016 that continue to ripple forward, and ahead to new sets of challenges and opportunities to learn, to speak, and to act.