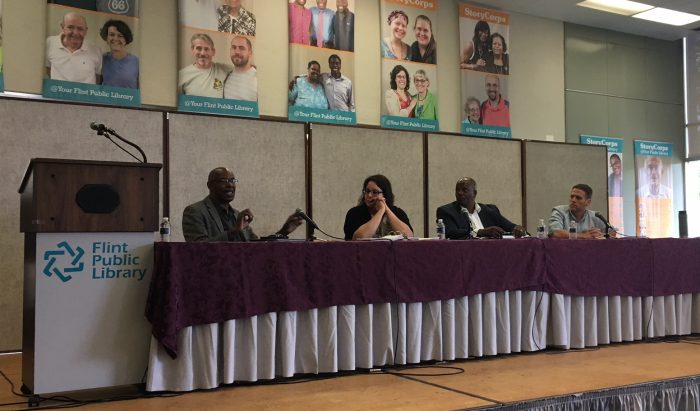 When we turn on our faucets, most of us take-for-granted that the water flowing from the pipes will be safe for consumption.  The residents of Flint, an impoverished, heavily black community only an hour east of Ann Arbor, no longer trust that their water is safe—to drink, for cooking, or for bathing. You see, Flint’s water system was contaminated by a massive infusion of lead beginning in 2014. Three years later, Flint residents are still wrestling with the consequences of this city-wide lead poisoning.

A Town Hall held on Saturday, October 21st at the Flint Public Library considered how the public trust was undermined in Flint and what should be done now to restore the community’s faith in the federal government, local leaders and institutions. Three Flint residents, impacted directly by the crisis, provided insight into this dilemma: Robert McCathern, Pastor of Joy Tabernacle Church, Greg Timmons, Co-Pastor of Michigan Area United Methodist Church, and Mona Munroe-Younis, Program Manager in UM’s School of Public Health, Ann Arbor campus. Jacob Lederman, Assistant Professor of Sociology at UM Flint, moderated the event.

The panel was the second of two Town Halls commissioned by the LSA Bicentennial Theme Semester.

Ms. Munroe-Younis, a Flint resident, explained that the water crisis wouldn’t have happened without “the power dynamic of an Emergency Manager.” These authority figures, appointed by the Governor and accountable only to the Governor and the State Treasurer, are imposed on poor, predominately black communities. Their primary task is to balance the city’s budget, not to protect residents. With this goal in mind, in 2014 Flint Emergency Manager Darnell Early chose to switch from safe water sourced from Lake Huron (which services the city of Detroit) to water sourced from the Flint River, a move he argued would save the city $4 million. Tragically, Flint’s local leaders failed to implement an anti-corrosive plan before allowing water to flow from the Flint River into residents’ homes. Corrosion control, required by federal law, coats the inside of old pipes to prevent them from leaking lead. Flint’s local leaders did not comply with this federal mandate. The result was a city-wide disaster compounded by the city’s determination to mask the problem.

“We noticed right away,” Ms. Munroe-Younis lamented. “The water came out of the faucet yellow, there were chunks of things in it, and it smelled like the river.” She, her husband, and her newborn son developed inexplicable rashes all over their bodies, a symptom reported by other Flint residents too, along with hair loss, memory loss, and seizures. Still, local leaders insisted the water was safe, advising concerned citizens to boil their water before consuming it. A year later, worried  Flint residents learned that their water was, in fact, contaminated with lead, and that boiling the water intensifies the lead content, it does not eliminate it.

Fifteen parts per billion is the level of lead allowable in drinking water. Local leaders fudged the data to make Flint’s drinking water look safe when they knew it wasn’t. The truth? Homes in Flint were testing at six and seven times the level deemed safe by federal mandates. Flint’s local leaders knew this. “A full year before they alerted the public,” Ms. Munroe-Younis noted, “the city was having bottled water delivered to their employees” at City Hall.

Once local leaders finally admitted the water was contaminated, not all residents got the word. Pastor McCathern recalled when he realized this: “Oh my God, children are still drinking this water! We assumed people were informed, but not everyone has tv or keeps up with the news.”  In particular, McCathern worried that elderly residents, the illiterate, and those without cars—a significant proportion of any poor population—were operating under bounded information. His congregation knocked on 1,000 doors in the vicinity of their church to inform residents that their water was unsafe, that they should properly install filters, and that they were eligible to receive bottled water supplied  by the government.

Pastor McCathern explained that some misinformed residents believed the water crisis was a hoax, that elites wanted the land, “they want [the poor] out, they want [the poor] to move.” Others were unaware of the extent of the crisis due to mistrust between police and the Flint community. When police officers came to the community, “people would hide, not open their door, because they believed they were raids.” At the same time, misinformation spread through the city, with some residents insisting police were not there in the public interest but to issue warrants.

Flint residents’ distrust of local officials escalated in August 2017 when the city, after distributing bottled water for nearly two years, announced “we’re pulling out, it’s up to [the churches] to figure out how to distribute the water,” Rev Timmons relayed. As a result, the churches put together a distribution system to fill the void left by the city government. Both Rev McCathern and Rev Timmons’ churches were involved in the distribution process and incurred the bulk of the costs as the state allocated $20/month per church to carryout this work, even though storage and distribution of bottled water had cost the state $20,000 each month. The “churches are not being fully reimbursed for what they’ve spent.”

Panelists argued convincingly that while local leaders clearly failed Flint, so had the state’s universities. Munroe-Younis hypothesized about why universities were not more heavily involved in righting this injustice: “Universities get scared because their money comes from the state.” There was “no institutional will on the part of any higher ed institution” in the state. Pastor Timmons said relying on the churches to do the work of the state is “not sustainable.” He argued, from a marketing perspective, universities should do more:  “I’m amazed that UM’s Business School did not see that marketing opportunity” which would result from intervening in the water crisis. “I didn’t see the leadership I’d hoped for. UM did not set the pace.” The University of Michigan “lost an opportunity to shine on an international stage.”

In his opening remarks, moderator Jacob Lederman noted that the city made “a strategic decision to make a white woman the centerpiece of the [water crisis public service] campaign because she would receive more sympathy from state legislators” than a black mother. Each panelist pushed back against this demonization, the misguided notion that poor, predominately black populations like Flint are undeserving and not worthy of assistance. “One of the [local] officials said publicly they are not going to go out on a limb for a community like Flint,” Munroe-Younis recalled. Pastor Timmons emphasized “people in Flint are not beggars, they are not weak. Our assets have been taken, our homes devalued because the community has been poisoned.” “America must remember,” Pastor McCathern cautioned, “that these are American people, American families who’ve been poisoned. This [injustice] is similar to the Tuskegee Experiment” [a medical study in which hundreds of black men in Alabama with syphilis were recruited on the promise of treatment, but the actual focus of the study was to assess what happens when syphilis goes untreated].  He continued, insisting safe water is a right: “I don’t think all has been told about the effects [of lead poisoning]. It’s a national problem. These are not poor people seeking a handout. There’s a social contract in America that says all people deserve [safe] drinking water.”

Karyn Lacy is Associate Professor of Sociology at the University of Michigan. She earned her PhD from Harvard University, is a Ford Fellow, and was a Visiting Scholar at the Russell Sage Foundation. Her work focuses on race relations, residential segregation, identity, parental socialization, social stratification, and suburban culture. Her book Blue-Chip Black: Race, Class, and Status in the New Black Middle Class (University of California Press) received the Oliver Cromwell Cox Book Award, and her work has appeared in the New York Times and the Chronicle of Higher Education. Lacy’s current work explores the construction and reproduction of racial and class-based identities among members of an elite children’s organization.