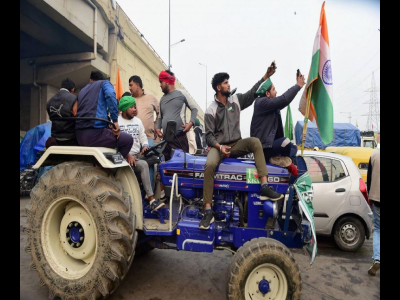 Department of Classics and Religion

Since November 30th, 2020, protestors from all parts of Indian society, including farmers, labourers, small business owners, professionals, and politicians, have joined the world’s largest nonviolent protest. Democratic principles are fundamental to this nonviolent protest. I applaud Indians of all colours, castes, and religious creeds for practicing something many of us leave at the altar of belief. The protest’s initial phase was socially uplifting and involved several rounds of dialogue between the Central government and the Farmers’ representatives. However, following a Tractor Rally held on January 26th, 2021, there has been an alarming atmosphere change. While protestors continue to gain support, the government has increased police presence, and violent clashes have occurred. Mobs were mobilized to attack protestors while police watched, and there have been extrajudicial arrests. Many lawyers have worked alongside the Delhi Gurdwara Prabandhak Committee for the release of many of those arrested.

There is a risk of losing sight of the economic factors prompting government policy and increasing pressure globally to open India’s market to foreign corporations. These events are patterned echoes of European colonialism, which forcibly opened China and India’s markets for goods production and raw materials by trade conglomerates who helped routinize the systemic violence that Western countries decry today at every opportunity. This pathological Janus-faced need of the so-called Global North for accessing India’s markets through pressure tactics while being a disengaged critical and salvific voice of concern, is an essential but overlooked aspect of geopolitics associated with the Farmers’ protest. The government has viewed this as an opportunity to enact a shift towards manufacturing as China’s increasing global influence weighs upon Western governments. Whether it is Amazon’s move to shift technology manufacturing to India, its legal battle with Mukesh Ambani to acquire grocery retailers, Facebook and Google’s investment in the Jio’s 5G and e-commerce platforms, or attempts to digitize India’s economy through demonetization, there are increasing global attempt to open India to asset managers. Although India has made strides recently in lifting people out of poverty, the benefits of this for most Indians living in poverty remain uncertain. In recent years, global imperialist economic systems have increasingly pressured India’s post-colonial national frameworks. It seems the pandemic is an ideal moment to make more significant inroads into India’s thriving market.

The farmer’s concerns are a legitimate by-product of decades-old inaction on political, economic, environmental, ecological, and sociological issues cutting across India’s population. It is not simply a question of farmer’s income but social mobility through improved access to education, health, and access to diverse employment avenues at stake. These are issues about sovereignty, self-determination, and democracy in India. While disagreeing with the letter of the laws passed in September 2020, we should also recognize that their spirit attempts to reform agriculture and labour. While the government maintains that these laws will benefit individuals in both these sectors, people have rejected their validity because they do not sufficiently break from colonial norms. Increasing politicization creates a risk that attention will turn from the debate around repealing the three farm laws to the violence. Protestors are aware of this possibility and have repeatedly asked that international focus remains on the issue of repeal. In solidarity with these voices, I focus my remarks today on farming. It allows us to see behind the curtain of Global Imperialism to which Canadian citizens remain mostly unaware and complicit

Imperialist economic goals never disappeared but were reoriented and embedded in neoliberal notions of liberty and industry to renew global domination. The impact of these reorientations is playing out in the Delhi protests because India’s farmers are disproportionately subjected to international agro-industry practices. Agro-industry policies yoked farmers to reliance on input heavy pesticides, GM seeds, and machinery since the Green Revolution began in the 1960s. The MSP, or minimum support price, was created in 1966 with a global system of seed and agriculture-based imperialism set up by post-war entrepreneurs and supported by Western governments to incentivize the adoption of mechanized farming. Decades of instability and disproportionate violence also enabled a shock and awe manner of institutionalizing their use. However, the human toll of pain and trauma gets redacted from Western memory by focusing on humanitarian issues of farmer health, increases in chronic illnesses and cancer, pollution of river systems, groundwater depletion, and increasing use of pharmaceuticals or substance abuse. These are spectres regularly raised but never redressed. Listening to the streams of voices from the rally, it is apparent that anxiety about increasing economic and political instability has combined with questions about health and mobility; together, these concerns are bringing protestors to Delhi from broad segments of society.

The three new agriculture laws evolve post-war policies that exploit and expropriate wealth from India to ensure that everyday Indians remain impoverished. They rely on a “development myth” invented to perpetuate imperialist hegemonic economic practices by national practices of local domination. Policies were put in place through a global system of coercion and cooperation between the world’s wealthiest individuals, financial institutions, and governments centred in the West to exploit the precarity of India’s post-colonial reality. It created developing economies by exporting chemical, industrial, and manufacturing processes deemed unsafe for Westerners to be exposed. Such economies are a perpetually unripened fruit designed never to develop. Enacted through a politics of friendship, they perpetuate the discriminatory and dehumanizing habitus used to dominate Asia. Countries like Canada continues to participate in this system of lobbying and bullying to gain increasing access to India’s cherished market through the WTO’s Cairns Group of agricultural exporting countries while calling for humanitarian restraint when faced with blowback. Indeed, it usurps the desires of brown bodies for safety within its borders as it makes salvific pronouncements. Those of us on the dark-side of multicultural neoliberal states, living in diasporic contexts, should raise our voices locally to move beyond such frameworks and facilitate increasing global multipolarity.

Considering the stalemate that has developed between representatives of the farm unions and the government, it is beneficial at this junction to discuss avenues for creating new bills that reform the agricultural sector without using “shock and awe” tactics. These new bills should align with education and health policies that enhance social mobility, not just asset allocation. The Swaminathan Committee on Farmers tabled five reports between December 2004 and October 2006 to facilitate growth of the sector and address farmer distress at the same time. When considered against the unprecedented surge of environmental and ecological changes, the development goal was not indistinct from sustainability practices or farmer well-being. However, the Swaminathan reports acknowledge the centrality of food security and micronutrient needs to India’s national interest. It recognizes that debt, workload, pesticides and fertilizer use, as well as land and water insecurity, are distressing farmers. It states that farmers need protection from the global pressures of export/import access to Indian markets. Lastly, it seeks to address inefficiency and waste in agriculture. Its recommendations include increasing timely and adequate credit support to small farmers, implementing universal public food distribution systems to eliminate micronutrient deficiencies, and increasing small-farmer competitiveness by promoting farmers’ associations and improving upon implementation of the MSP. Lastly, the report recommends promoting education and skills development to enfranchise farmer-based innovation and direct them to new employment avenues. The Swaminathan Committee’s recommendations remain vital to the lived socioeconomic realities and environmental pressures facing Indian farmers.

I suggest that there are possibilities for a more gradual and adaptable policy framework to be put into law that provides increased protection to farmers while gradually moving the sector with 21st-century agricultural realities. Future Foodscapes (2020), a recent report that focuses on Latin America and the Caribbean agricultural challenges, uses a risk assessment model to provide recommendations to issues that resonate with the Indian situation. It divides recommendations into four actionable groupings called the building blocks for “a successful strategy.” These include: (1) No regrets or actions that will pay off in the future; (2) Risk Mitigation, or actions to minimize risk; (3) Options Open, actions that confer possibility to act later; (4) Game Changers, or risky actions that may reshape the future. The Swaminathan committee’s recommendations fall within the “no regrets” grouping, whereas the recent agricultural laws are game-changing propositions. Using the parameters outlined in Future Foodscapes suggests that while India’s new farming laws are undoubtedly bold, there are indeterminable risks associated with their implementation, requiring more significant time to evolve safely. Gradual change is beneficial given the precarity of farmers’ lives, the burdensome debt load needs to bring crops to harvest, and the inability to have guaranteed returns on investment. Reasserting that farmer well-being and reform are not mutually exclusive gives the need to pause and rethink what possibilities exist through similar “building block” strategies for reform. Both government and union leaders should draw upon the vast scholarly literature on India’s agriculture industry and the challenges facing farmers. At this juncture, analyzing these reports and studies may help break the deadlock and facilitate a return to the negotiation table. There is no question that India’s farming sector faces shared global pressure to change unsustainable practices. Alternate pathways are needed to ensure agricultural reforms vouchsafe India’s territorial integrity while addressing 21st-century global issues of food, land, and water security.