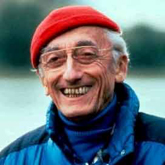 Cousteau was born on 11 June 1910, in Saint-André-de-Cubzac, Gironde, France to Daniel and Élisabeth Cousteau. He had one brother,Pierre-Antoine. Cousteau completed his preparatory studies at the Collège Stanislas in Paris. In 1930, he entered the École Navale and graduated as a gunnery officer. After an automobile accident cut short his career in naval aviation, Cousteau indulged his interest in the sea. 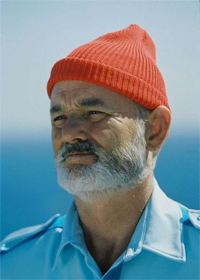 The Life Aquatic with Steve Zissou is a 2004 comedy-drama film directed, written, and co-produced by Wes Anderson.[2][3] It is Anderson's fourth feature length film, released in the U.S.

on Christmas 2004. It was written by Anderson and Noah Baumbach and was filmed in and around Naples, Ponza, and the Italian Riviera.

The film stars Bill Murray as the eponymous Zissou, an eccentric oceanographer who sets out to exact revenge on the "Jaguar shark" that ate his partner Esteban. wikipedia.com 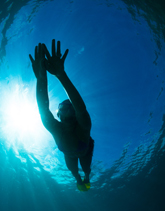 Free-diving (or freediving) is a form of underwater diving that relies on a diver's ability to hold his or her breath until resurfacing rather than on the use of a breathing apparatus such as scuba gear. Examples include breath-hold spear fishing, freedive photography, recreational breath-hold diving, apnea competitions, and to some degree, snorkeling. The activity that garners the most public attention is the extreme sport of competitive apnea in which competitors attempt to attain great depths, times, or distances on a single breath.