Our lab is focused on understanding how sleep contributes to two processes in the mouse brain: hippocampal long-term memory formation and visual cortex plasticity. 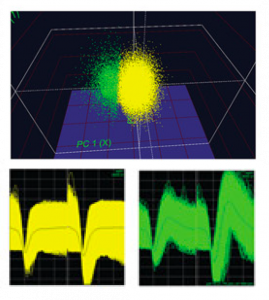 Sleep is critical for some forms of functional plasticity in the cortex, including changes in response properties in the visual cortex. Why would some forms of brain plasticity preferentially occur during sleep? One major feature of mammalian sleep – that makes it unique from other states – is the presence of high-amplitude, low-frequency oscillations of synchronous activity between the cortex and thalamus. Thus one possibility is that these oscillations promote plasticity in a way that network activity in wakefulness does not. To test this, we are using recently-developed optogenetic tools to silence subsets of neurons involved in generating of these oscillations, in a state-specific manner. We are studying the effects of these network-level manipulations on the activity and plasticity of thalamic and cortical neurons using high-density recording in freely-behaving mice. 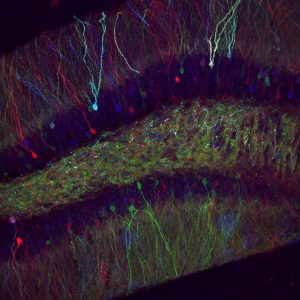 Sleep deprivation interferes with consolidation of episodic memories (i.e., conversion of a short-term memory into a long-term memory), a critical function of the hippocampal formation. However, although the intracellular signaling pathways involved in hippocampal memory consolidation are well-studied, almost nothing is known about how these pathways are activated by network activity, and how network activity during sleep may promote this process. We are exploring these issues using a combination of electrophysiological, optogenetic, and biochemical techniques.

Disorders of neurodevelopment, such as  autism spectrum disorders, are marked by profound sleep abnormalities; one untested possibility is that the cognitive deficits they have in common are due to abnormal sleep. Mice have been developed which recapitulate the specific genetic mutations seen in patients with Fragile X syndrome and Angelman syndrome. We are currently interested in studying how these mutations affect neural network activity in wakefulness and sleep, sleep behavior, and specific features of network activity associated with memory consolidation and plasticity. These studies will improve our understanding of sleep-dependent consolidation mechanisms under normal and pathological conditions, which may lead to novel targets for therapeutic intervention in disorders where cognition, memory, and synaptic plasticity are adversely affected.