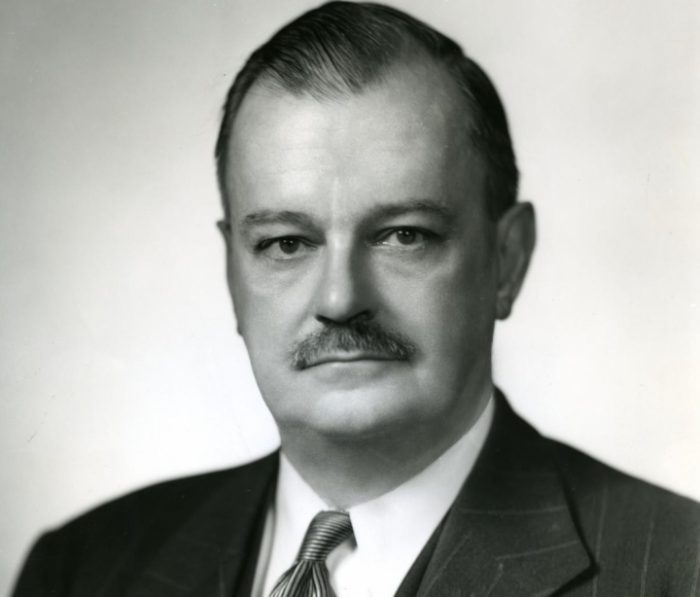 I’ve been both pleased and concerned to see the recent attention to Clarence Cook Little, president of the University of Michigan from 1924 to 1929.  Pleased, because while in my own research I have found him both admirable and objectionable, I have always found him fascinating.   Concerned, because the recent attention to Little seems less attuned to exploring the moment that he represents in U-M history than to putting him forward as a figure worthy of erasure from the University’s landscape.

I believe it would be a laudable goal to undertake a survey of those whose (mainly white male Protestant) names adorn our campus with an eye to a broad renaming project that more closely reflects the diversity of our history.  If, however, we are going to begin considering the worthiness of our buildings’ namesakes on a case by case basis, it makes little sense to me to start with C.C. Little.

The C. C. Little Building has emerged as a first target for renaming for two reasons. For one thing, nobody in Ann Arbor really cares about Little.  He was here for only a few years and there is little in our collective story that connects us to him apart from waiting for the bus. Because of this, he is vulnerable in relation to the other truly serious concern: his identity as a proud eugenicist. As such, Little is associated with practices, both objectionable and horrific, ranging from immigration restriction and sterilization programs in the U.S. to the Nazi mass murder of Jews as well as of those deemed “mentally unfit.” There is no doubt that the values and movements associated with eugenics are and should be beyond the pale at the current University of Michigan.

It always feels like a weak defense to point out that, as objectionable as such stances may feel today, they were very much a part of respectable science at the time.  It seems more appropriate to point out that, over most of the past two hundred years, the mainly white Christian men who reached positions of power, like the presidency of the University of Michigan, rose to influence in a society that was itself deeply racist, anti-Semitic, and male-centric. As much as we might regret it today, the flawed movements and points of view embraced by many of these men were inherent in the intellectual currents and leadership that shaped the institutions we have inherited. In reexamining the objectionable views of past leaders, it seems important to consider the manner in which such views defined their University leadership and their other contributions.

I first became interested in C.C. Little because the period of his U-M presidency coincided with the time period during which most Northeastern elite universities were responding to the quickly growing proportion of Jewish students among their student bodies. Administrators at Harvard, for instance, looked on with growing panic and dread as they saw the percentage of Jews climb from 10% in the entering class of 1910 to 21.5% in 1922. In response, they and their colleagues at other elite schools introduced a range of excluding mechanisms that continue to define the admissions processes of American colleges and universities to this day.  For the first time, applicants had to fill out long forms, write personal essays, gather letters of recommendations, and submit to admissions interviews. Although the public rationale for these innovations focused on the search for “character,” administrative records at Harvard, Princeton, Yale, and elsewhere make clear that the purpose was to respond to what Harvard president, Abbot Lawrence Lowell, termed a “Jew problem.”

C.C. Little, a descendant of the Puritans and Paul Revere, and a thorough Harvard man, came to Michigan as a member of the elite class most threatened by these immigrant outsiders. During his presidency, he did indeed introduce an application process which included the forms, essays, and letters of recommendation being adopted elsewhere. But Michigan’s admission documents differed in important ways from those of its northeast counterparts. At Harvard, Yale, and other schools, the intense quest to limit Jewish students led to questions about religion, race, and any name changes in the family. The new Michigan form of 1926, by contrast, while it did ask for parents’ names and place of birth, had no questions about race or religion.

As a eugenicist, Little had a deep interest in identifying the students best suited to take advantage of a Michigan education.  But, as a scientist, he approached this question as he did most other decisions that came his way – always asking for a verifiable study before making any conclusions. In short, he rejected approaching college admissions based on pre-existing prejudices.  He spoke out publicly against Harvard’s attempt to limit Jewish students and argued that colleges had never even studied whether the “offspring of, say, an Irishman or the imaginative Russian” might be better fitted to the university demands than “a man of Anglo-Saxon ancestry.”

Moreover, Little rejected the explicitly racist demands of the University’s biggest donor, William W. Cook who singlehandedly financed the building of U-M’s beloved Law School Quadrangle.  On the occasion of Little’s inauguration, Cook, for whom we should note the William W. Cook Legal Research Library is named, sent a list of instructions for the law school, one of which was “to refuse all Jews admission.” Little and the Regents were able to beat back this suggestion.  But forty years after he left Michigan, Little cited his fear of provoking a damaging clash with Cook — in response to a 1929 suggestion from the donor to exclude black and Jewish students — as one of the reasons for his resignation. Prior to the law quad, Cook had funded the 1915 construction of the Martha Cook dormitory for women, named for his mother. The building features a statue over the entrance of Shakespeare’s Portia. According to University websites,  the statue, was suggested by Cook as “Shakespeare’s most intellectual woman,” but as James Tobin has pointed out, Cook also admired her as someone “who … brought to book the bloodthirsty Jew.”

One of the marks against Little, Professor Alexandra Stern has argued , was that he contributed little to Michigan besides the introduction of freshman orientation. Beyond that, however, I would point to the introduction of an admissions process unblemished by religious and racial tests, as well as to his push to introduce a more extensive dormitory system in order to do away with the abuses and exclusions that marked Ann Arbor’s prevailing housing market for students. All these changes were key elements in a push toward a more diverse and inclusive University.

I have found much to disdain and much to admire in the career of C.C. Little both at Michigan and beyond. As a figure in the history of U-M, he is clearly not the best, but neither is he the worst.

No doubt, if we were to undertake a survey of the range of characters memorialized in Michigan’s built environment, we would find many who held beliefs and pursued program that would be anathema to our current values and commitments.  Among those very same folks, however, we would find much to admire and would recognize ideas and innovations that underlie much of the good work that we try to do today.  As the programs presented as part of the last Winter term’s LSA Bicentennial theme semester on “Making Michigan” made manifest, we are heirs to an inspiring, problematic, and rich history of educational achievement. C.C. Little is part of that history, as are all of us at the University today. Engaging with the complexity of that story may demand more of us than changing our campus map.

Karla Goldman is Sol Drachler Professor in the School of Social Work, where she directs the Jewish Communal Leadership Program, and Professor of Judaic Studies at the University of Michigan.