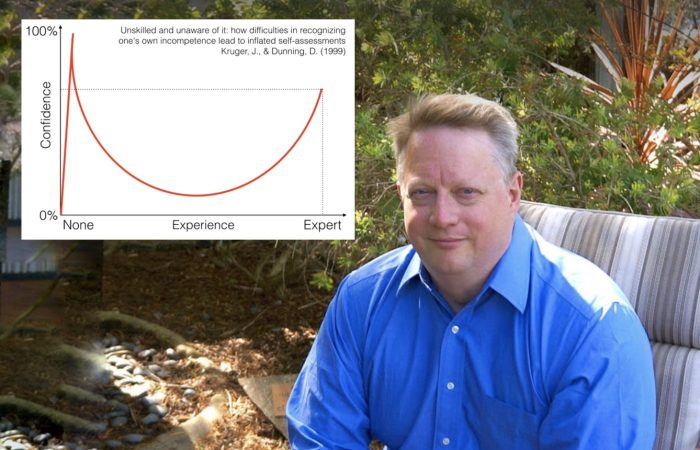 David Dunning, University of Michigan professor of psychology, has uncovered significant insights into the intricacies of human cognition, judgement, and decision making. His widely recognized 1999 co-authored study generated the Dunning-Kruger effect, the tendency for individuals with low ability to inaccurately assess their performance. In an interview, Professor Dunning speaks to the changing nature of the Dunning-Kruger effect in today’s Digital Age.

The ability to gauge the potential outcomes of everyday life requires a keen understanding of individuals’ surroundings and selves. By interpreting their environment and simultaneously assessing their own capabilities, individuals gain awareness of the most beneficial way to exist in that space. Therefore, a perfect alignment between an individual’s perception of their capabilities and their eventual performance essentially generates the most strategic and successful decision maker. Unfortunately, humans tend to inaccurately assess their ability to perform, which is a cognitive bias that David Dunning, current University of Michigan professor and notable social psychologist, continues to explore. While psychologists have celebrated his work for unveiling new perspectives on human judgement, today’s digitally-dominated society offers new applicability for his research.

David Dunning’s collegiate and professional experiences have granted him an expansive background in decision making and human misbelief, the strong belief in falsities. With Bachelor’s and Graduate degrees in psychology, as well as a plethora of peer-reviewed journal articles, penetrative books, and thought-provoking commentaries, Dunning has developed a deep understanding of the contradiction between an individual’s self-perception and reality. He has explored the interrelated social and psychological factors dictating people’s concept of self and their judgement of others. One of his most widely cited works was his 1999 co-authored study with NYU Stern School of Business professor Justin Kruger titled “Unskilled And Unaware Of It: How Difficulties In Recognizing One’s Own Incompetence Lead To Inflated Self-assessments.” In this four-part study, the two psychologists asked participants to assess their ability in humor, logical reasoning, and grammar, followed by a test of their performance. The overwhelming pattern in their results displayed that subjects who performed the lowest had drastically overestimated their abilities. This study generated the Dunning-Kruger effect, a cognitive bias where people inaccurately assess their cognitive capacity, which aids in partly explaining inaccurate conclusions and problematic choices. Since survival and success depend on people’s ability to strategically navigate the surrounding world, any interference with their judgement will inherently pose a risk to their security.

Individuals across multiple disciplines soon found the relevance of the Dunning-Kruger effect to their specific niche. Within anthropology, the Dunning-Kruger effect has identified another instance of cultural norms impacting social and psychological behaviors. University of British Columbia professor Steven Heine compared North American and East Asian self-assessments, finding that East Asians are more inclined to underestimate their abilities to better themselves and their likability. Within the medical field, a 2001 study found most medical students inaccurately assessed their interviewing skills both before and after an interview. Given the immense importance of the medical field’s accuracy, people should consider the many ramifications of the Dunning-Kruger effect in high-stake situations.

The studies following Dunning and Kruger’s research have collectively outlined the way this cognitive bias can produce inaccurate judgements and ill-informed decisions. In today’s digital era, cognitive biases are one of many factors interfering with the decision making process. Digital media play a prominent role in individuals’ access to information, which holds these platforms partly accountable for the developing opinions and reactive measures of their users. Therefore, social scientists must question how the Dunning-Kruger effect exists in this context. Do technologies exacerbate the issues associated with the Dunning-Kruger effect or do they provide an antidote? When asked this question, Dunning pointed to the vast amounts of deliberate and inadvertent misinformation online. While technology can provide the necessary resources to label someone an expert in a certain area, it can also lead people to believe they’ve mastered a topic without it being true. Hence, Dunning argues that technologies can heighten the variability of this cognitive bias.

Additionally, the Quantified Self Movement, a cultural shift towards self-knowledge through self-tracking technologies, clearly plays a role in people’s concept of self and their judgement of their capabilities. For instance, FitBit assesses health by tracking steps walked, floors climbed, and calories burned and Instagram indirectly measures social validation through the number of “likes,” followers, and views. Do tracking technologies challenge the Dunning-Kruger effect by eliminating the ambiguity in self-assessments? While there is a growing presence of tracking technologies, Dunning believes there are still many aspects of the individual that remain immeasurable. This cognitive bias, therefore, continues to exist in our digital present as long as some aspect of the individual is not measured by technology.

Ultimately, Dunning’s work continues to inspire further exploration into the intricacies of human cognition, judgement, and decision making. We should challenge today’s thinkers to understand the way the Dunning-Kruger effect, in addition to many other psychological theories, changes within the context of a digitally dominated society. To help with this exploration, Dunning suggests students at the beginning of their careers should gain familiarity with the basics of social science research, including the importance of a control group, the difference between correlation and causation, and the necessity of multiple angles of an argument. Above all, he recommends mastering the ability to both recognize social science experts and identify in which situations they are needed. Especially during this pandemic, knowing who to trust, where they’re found, and when to call them will uncover a clearer path through uncertainty.

DeAngelis, Tori. “Why We Overestimate Our Competence.” Monitor on Psychology. February 2003. https://www.apa.org/monitor/feb03/overestimate.

Kruger, Justin and David Dunning. “Unskilled and unaware of it: how difficulties in recognizing one’s own incompetence lead to inflated self-assessments.” Journal of personality and social psychology 77 6 (1999): 1121-34.