Extracting information from the fossil record Taphonomy is the study of biological and geological processes that destroy, preserve, or alter organic remains as fossils.  Taphonomy is important for inferring species richness of fossil assemblages, abundances of taxa, species associations, the timing of first and last appearances of lineages in the fossil record, and the ecology of ancient species.  My work on the taphonomy of vertebrate assemblages provided paleocommunity reconstructions—corrected for taphonomic processes—for Miocene mammals of Pakistan; guidelines for estimating the number of individual animals preserved in terrestrial vertebrate fossil assemblages; a statistical approach to evaluating real versus apparent faunal change, in light of variable sampling of fossiliferous intervals; estimates of temporal completeness of ancient fluvial sediments; and quantitative approaches in taphonomy and faunal analysis of vertebrate fossil assemblages.

I am a member of the Harvard University-Geological Survey of Pakistan Siwalik Research Project. (“Siwalik” is the term for Neogene sediments shed from the Himalaya Mountains.)  Siwalik sediments in northern Pakistan are over 5000 m thick and span the last 18 million years.  This sequence is the longest and best-documented record of Neogene mammals in the world and allows us to evaluate faunal dynamics in relation to changes in climate and barriers to immigration over the Neogene.  We analyzed late Miocene (10.5-5.5 million years ago) faunal change during an interval of increasing aridity involving vegetation change from forest to grassland.  Isotopic sampling of herbivorous mammals from before, during, and after the interval of vegetation change revealed that most lineages that consumed forest vegetation (fruit, broad leaves) disappeared as forests shrank.  A few lineages changed their diets to incorporate more grass and less browse as the vegetation changed.  Immigrant herbivores ate diets of mixed broad leaves and grass or entirely grass.  Within 2 million years, 75% of the herbivorous lineages disappeared.  These results support a model of environmental filtering of species during an interval of regional climate change.

Currently, we are evaluating how different tectonic and climatic conditions influenced rates of immigration, extinction, speciation, and changes in ecological structure of mammalian faunas over millions of years and during several narrow time intervals—for which we have detailed information about environmental and faunal variation across the paleo-landscape.  The conceptual framework involves the interaction between geographic barriers affecting isolation versus accessibility of the floodplain ecosystem—thereby inhibiting or facilitating immigration—and regional climate change.  These forcing mechanisms produce four hypothetical biogeographic “modes,” each with unique faunal dynamics.  These contrasting scenarios have different implications for rates of change in species richness and ecological structure.  Three of these four modes are represented in the Pakistan sequence. Another facet of this research is to compare faunal dynamics in the Pakistan sequence with the record of Miocene faunas from Spain, the only other Eurasian sequence that captures much of the Neogene with high temporal and taxonomic resolution.  With my former postdoctoral collaborator, M. Soledad Domingo, we are analyzing the diversity dynamics of Spanish Miocene faunas in advance of comparison with the faunal record from Pakistan. 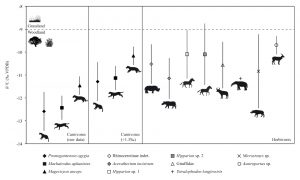 Ecological biogeography of mammalian faunas at regional to continental scales

I have created databases of modern mammalian faunas (species list of local faunas), ecological attributes of the mammalian species, and information about vegetation and climatic variables for each locality in order to evaluate the ecological, evolutionary and geohistorical influences on mammalian diversity.  The goal of this research is to model the relationship between environmental conditions and ecological properties of modern mammalian faunas (over 300 localities, half of extant mammal species) in order to test hypotheses about biogeographic processes that shape the composition of mammalian faunas, to evaluate diversity gradients over deep time, and to provide a quantitative method of paleoclimatic inference for mammalian fossil assemblages.

One of the striking diversity gradients in modern ecosystems is the topographic gradient: species density is greater in areas of high topographic complexity than in adjacent lowlands. Part of my current research focuses on the historical roots of the topographic diversity gradient over geologic time.  With John Finarelli (University College Dublin) and doctoral student Tara Smiley (Department of Earth and Environmental Sciences, Michigan), we are evaluating the diversification of mammals over the last 25 million years in the Great Plains (tectonically inactive, simple topography) and the intermontane west (tectonically active, complex topography).  For rodents, the most diverse clade of mammals, diversification rate peaked in the intermontane region during an interval of global warming and intense regional tectonic activity, but ther topographic diversity gradient was not a persistent feature of mammalian faunas.  Doctoral students Tara Smiley and Katie Loughney and I are conducting field work in Miocene sequences of the Mojave Desert to evaluate changes in mammal diversity in relation to regional tectonic and climatic history. This research has also revealed the untapped potential of integrating data and approaches from the fossil record, landscape evolution, and phylogeography.  With a focus on how landscape history influences diversification of mammals, integration of these different perspectives would present opportunities to evaluate how population-level processes have resulted in diversification of lineages over long intervals of changes in topography, climate, and the spatial distribution of environments.  Brett Riddle (University of Nevada, Las Vegas) and I organized a catalysis meeting at  NESCent (National Evolutionary Synthesis Center) in August 2013 on the theme of integrating phylogeography and historical biogeography with the fossil record for rodents.  We have ongoing collaborations with the members of this group.

Among the environmental challenges of our time is the looming threat of a sixth mass extinction.  Populations, species, and ecosystems around the world are threatened with degradation or extinction from human impacts.  Much of the impact of human activities on biodiversity occurs directly or indirectly through agricultural practices, at the scales of the field, the landscape, and the food system.  Therefore, analysis of the relationship between agricultural practices and biodiversity is critical to alleviating the negative impacts of human activities.  Our comparison of yields between organic and non-organic production methods demonstrated that organic agriculture has the potential to produce enough food to feed the entire human population.