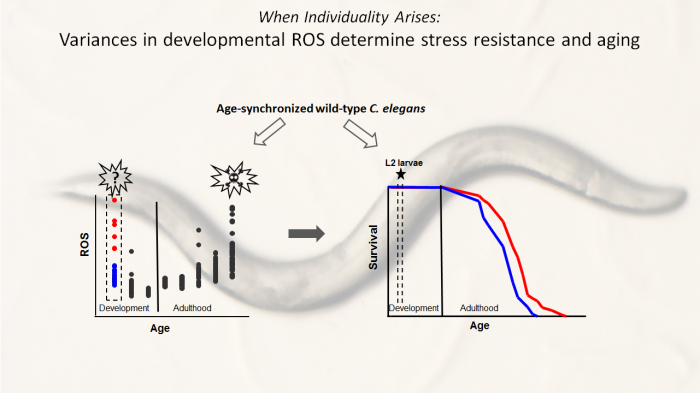 For many years, genetics has served the aging field very well. It was instrumental in identifying important longevity pathways and genes involved in lifespan determination.  However despite all the progress that has been made in these areas, we unfortunately still know surprisingly little about the underlying causes of aging and the biochemical effects of lifespan extending mutations.  One popular theory of a cause of aging is that increased levels of oxidative damage contribute to the physiological decline observed in aging organisms. Despite the large number of studies that have been done to investigate this topic, it is still unclear what if any role reactive oxygen species (ROS) play in determining lifespan.  Genetic manipulations of antioxidant systems in C. elegans and other organisms have as often as not failed to provide convincing support for the oxidative stress theory of aging.

Although the ability to mount an oxidative stress response has been shown to ensure a normal lifespan, a global increase in oxidative stress did not appear to limit the lifespan of C. elegans or other model organisms.  A growing body of evidence now suggests that ROS, such as peroxide, also play important regulatory roles in redox-signaling events, affecting growth, differentiation and development. The necessity of ROS for these important processes may explain why genetic manipulations designed to reduce the levels of ROS were sometimes even counter-effective. To fully understand and dissect the effects of ROS in development, growth and aging, it is therefore crucial that we know the levels of endogenous ROS at any point in the lifespan of an organism, and determine if, when and how endogenous ROS levels affect lifespan.  With the use of real-time quantitative in vivo ROS sensors, we have provided evidence that C. elegans accumulate high levels of peroxide early in life, that the ability to restore a reducing environment upon entering adulthood appears to predict longevity, and that individuals with lower than average developmental peroxide levels show an extended lifespan. These results are consistent with earlier studies, which suggested that developmental events determine lifespan of C. elegans.  It has been demonstrated, for instance, that transient manipulation of cellular respiration conducted during C. elegans development is sufficient to significantly expand the lifespan of the worms.  Moreover, previously conducted sorting experiments revealed that even at the first day of adult life, variations in the induction of a stress-sensitive reporter gene can be used to predict lifespan.  These results, together with our findings that peroxide levels vary dramatically among individuals within a synchronized population suggest that we have not only identified a very early biomarker of aging, but also a good candidate for one lifespan-determining factor in C. elegans.

In 2010, Cynthia Kenyon wrote in Nature: “It is possible that a stochastic event — a metabolic insult or noise in the expression of a regulatory gene — flips an epigenetic switch or sets in motion a chain of events that promotes ageing. One way to investigate stochastic factors affecting lifespan would be to identify a marker that predicts, early in life, the subsequent rate of ageing and then sort animals according to this marker, learn how they differ, and make and test hypotheses”.  We can now do precisely that!  The capability of our system to assess and follow individual worms that greatly vary in endogenous ROS levels over their complete lifespan will allow us to determine how variations in peroxide levels affect aging phenotypes and longevity.  Our ability to sort the worms allows us to determine immediate and long-term changes in gene expression that contribute to and/or are caused by these varying peroxide levels, and are potentially involved in lifespan determination. We will identify the proteins that are most affected by oxidation, and attempt to identify which affected targets contribute the most to the very significant individual-to-individual variations in lifespan that we and others have observed in isogenic populations in a variety of organisms. Identical twin studies for instance have shown that a maximum of 25% of lifespan in people is genetically determined.  Our data suggest that precise timing of interventions might be the key to the effective manipulation of lifespan.  Our research has therefore the clear potential to reveal when and how individuality arises.  It will form the groundwork for future studies in mammals where early potentially also ROS-related events have recently been shown to have profound impact on lifespan.