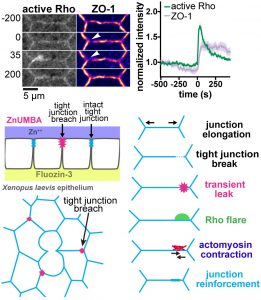 Epithelial barrier function is critical for proper organ function.  We developed a novel live-imaging barrier assay called Zinc-based Ultrasensitive Microscopic Barrier Assay (ZnUMBA), which we used in Xenopus embryos to visualize short-lived, local breaches in epithelial barrier function with high spatiotemporal precision.  These breaches, or leaks, occur as cell boundaries elongate, correspond to visible breaks in the tight junction, and are followed by transient localized Rho activation (“Rho flares”).  We discovered that Rho flares restore barrier function by driving concentration of tight junction proteins through actin polymerization and ROCK-mediated localized contraction of the cell boundary.  We are currently working to determine how the Rho flares are triggered.  We propose that Rho flares represent a damage control mechanism by which cells are able to rapidly repair and reinforce their junctions and maintain barrier function in response to events that could disrupt tight junctions such as cytokinesis, wound healing, and developmental morphogenesis. 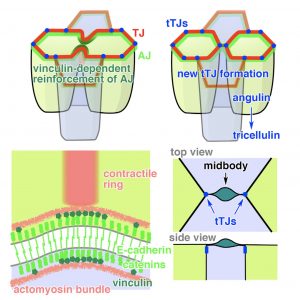 Little is known about how cytokinesis works in epithelial tissues.  Specifically, it is unclear how adhesion and barrier function are maintained as cells undergo epithelial division.  Using live imaging of Xenopus gastrula-stage embryos, we characterized how epithelial cells maintain tight junctions and adherens junctions during cytokinesis and how new tricellular tight junctions form after cell division.  Using fluorescence recovery after photobleaching (FRAP), we showed that adherens junction proteins are stabilized at the cleavage furrow – where junctional tension is increased due to the cytokinetic contractile ring – and this reinforcement is due to recruitment of Vinculin, which strengthens the connection between the adherens junction and the actin cytoskeleton.  These findings were particularly interesting in light of recent papers showing that in Drosophila epithelial cytokinesis, the adherens junctions are reduced and become disengaged from the contractile ring, indicating that junctions respond to increased tension generated by the contractile ring in different ways in Xenopus vs. Drosophila.  Our study also provided the first evidence about how nascent tricellular tight junctions are formed following cell division.  We are currently working to determine how mechanical forces generated in neighbor cells influence epithelial cytokinesis.

Novel roles for Anillin in structuring junctional and medial-apical actomyosin 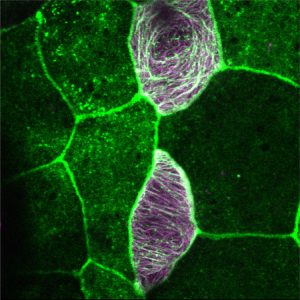 The actomyosin scaffolding protein Anillin is well-known for its role in regulating the contractile ring and mediating its connection to the plasma membrane during cytokinesis.  We identified a novel role for Anillin as regulator of cell-cell junctions.  We demonstrated that Anillin localizes to apical cell-cell junctions and regulates junction integrity, as both tight junctions and adherens junctions were disrupted when Anillin was knocked down.  Anillin depletion decreased the intensity of F-actin accumulation at cell-cell junctions, whereas Anillin overexpression caused a hypercontractile cell shape phenotype as well as abnormal apical accumulation of F-actin.  One of our most fascinating findings was that in addition to baseline junctional RhoA activity zones around the perimeter of epithelial cells, in Anillin knockdown embryos, there was a dramatic increase in localized, transient accumulations of active RhoA (“Rho flares”) at cell-cell junctions.  Additionally, we demonstrated that Anillin regulates epithelial cell mechanics by structuring the medial-apical actomyosin network that connects to apical cell-cell junctions.  Using a molecular probe for increased junctional tension as well as laser ablation, we demonstrated that Anillin structures medial-apical actomyosin and promotes tensile forces stored in this network.  We are currently investigating whether Anillin’s ability to regulate cell-cell junctions as well as cell-scale and tissue-scale mechanics plays a role in developmental morphogenesis. 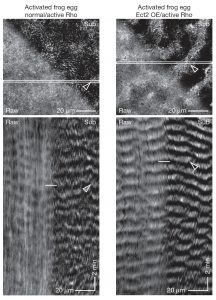 The dynamics of the cortical cytoskeletal network underlying the plasma membrane are controlled by Rho GTPases, which are locally activated in distinct patterns corresponding to different cell shape changes that are needed to drive processes including cytokinesis, cell migration, and wound healing.  We have shown that cells can support sustained waves of dynamically-coupled Rho activity and actin assembly, which we termed “cortical excitability”.  Additionally, mathematical modeling followed by experimental verification revealed that cortical wave propagation is based on Rho autoactivation and actin-mediated Rho inactivation.  With our collaborators, we are now taking a multi-pronged approach aimed at investigating the mechanisms underlying these cortical waves including experiments in intact echinoderm oocytes (von Dassow lab, U. of Oregon),  Xenopus oocytes (Bement lab, U. of Wisconsin), and a reconstituted system (Miller lab).  Iterative experimentation, wave analysis, and computational modeling (Goryachev lab, U. of Edinburgh) is employed to help test and identify the molecular mechanisms regulating cortical excitability.  In current work, Miller lab postdoc Jen Landino has been developing a reconstituted system combining a model cell membrane (supported lipid bilayer) with a model cytoplasm (Xenopus egg extracts), which we image by TIRF microscopy using probes for active Rho and F-actin, among others.  This simplified reconstituted system allows us to manipulate potential cortical excitability players (e.g. by adding purified RhoGEFs and RhoGAPs, cytoskeleton inhibitors, modifying lipid composition, etc.) in ways that we cannot in vivo.

My postdoctoral work in Dr. Bill Bement’s lab at the University of Wisconsin focused on understanding how Rho family GTPases regulate cytokinesis.  When I joined the lab, recent work had shown that the small GTPase RhoA forms a precisely-bounded zone of high activity at the cell equator prior to cytokinesis.  The role of a RhoGAP, MgcRacGAP, which is localized at the equatorial cortex where high Rho activity is necessary to promote contractile ring formation, was unclear.  I identified a novel mechanism, Rho GTPase flux, which cells use to form a focused band of high RhoA activity, which in turn activates a focused actomyosin contractile ring during cytokinesis.  My work showed that the GAP activity of MgcRacGAP is necessary early and throughout cytokinesis to help keep the Rho activity zone focused by promoting flux through the GTPase cycle.  Additionally, my work contributed to our understanding of how the furrow-inducing signal reaches the cell surface and generated several new molecular tools for live imaging in Xenopus embryos.  Building on this work in my lab here at the University of Michigan, we tackled several unanswered questions regarding MgcRacGAP.  We showed that the GAP activity of MgcRacGAP down-regulates RhoA and Rac1 activity at localized regions of epithelial cells, which is necessary for successful cytokinesis and cell-cell junction structure.  Further, we showed that Xenopus MgcRacGAP contains an SxIP motif, which binds to the microtubule plus end tracking protein EB1 and is important for proper delivery of MgcRacGAP to the equatorial cortex to regulate RhoA activity. 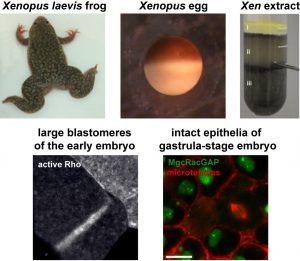 The approaches we use to address these questions include cell biology, molecular biology, and biochemistry, with an emphasis on live quantitative microscopy.  We utilize fluorescent probes to detect the subcellular localization and dynamics of active Rho GTPases and other key molecular players in live cells.  Additionally, we ­have developed a toolkit of multiple GEFs, GAPs, and other Rho GTPase regulators, as well as cell-cell junction components.  By perturbing the proper regulation of Rho GTPase activation and observing and quantifying the effects on cells, we can dissect the molecular mechanisms that regulate RhoA activation during cytokinesis and at cell-cell junctions.

A major strength of our work is that it is carried out in a natural environment, the developing Xenopus laevis (African clawed frog) embryo.  In this context, a dividing cell makes cell-cell junctions with its neighbors as part of a larger polarized epithelial tissue where cells are interconnected and communicate via mechanical and signaling interactions.  Xenopus embryos offer multiple advantages for studying cytokinesis including external development, rapid and synchronous cell division, large cell size for detailed microscopy, and the ability to examine different developmental stages.  We frequently us gastrula-stage embryos for our experiments. By gastrula stage, the embryos are covered by a polarized epithelium with functional cell-cell junctions that mimic the mechanical forces experienced in other epithelial tissues. Xenopus epithelial cells are well-suited for live imaging and naturally undergo cell division and a variety of cell shape changes and tissue morphogenesis events during early development, making this a powerful system for investigating dynamic shape change events in a natural environment.